I'm getting really bad at remembering where I've seen certain books blogged about or who recommends things to me. I know Nicola wrote about The Chalk Circle Man by Fred Vargas here on Back to Books, but there were others so if it was you, please shout. Anyway, whoever it was, I'm really glad I took notice. 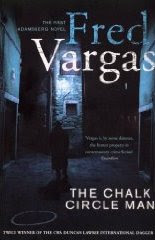 The new commissaire of the police headquarters in the 5th arrondissement in Paris is 45 year old, Jean-Baptiste Adamsberg, originally from near the French border with the Pyrennees. He's a quietly spoken, relaxed, quirky sort of man but a very good detective indeed.

When a series of items start appearing, surrounded by blue chalk circles, people are amused and intrigued. But Jean-Baptiste is not. The circles are always done at night and in secret and it's clear the perpetrator is teasing... or is he? Items chosen to go in the circles are bizarre - cigarette lighters, bottle tops, watch straps, a pigeon's foot... and then a dead cat. Jean-Baptiste foresees somethings awful happening and sure enough it does when the body of a woman turns up next: her throat has been slit. The police can do nothing but wait for the next victim and it's an elderly male doctor this time, followed some nights later by another woman. The police have a serial killer on their hands.

While all this is going on a woman turns up at headquarters. 'Mathilde' is worried about a blind man who has gone missing. Slowly Jean-Baptiste gets to know this odd woman who follows random people in the street and picks up waifs and strays... and learns about the people she lives with. Mathilde claims she knows who The Chalk Circle Man is; Jean-Baptiste is both intrigued and thoroughly alarmed... what is the connection between this rather eccentric woman and these horrendous crimes?

Well, I started this book on Sunday and finished it on Monday. From that it can be deduced that, yes, it's a quick read, but also that it's a compulsive one. I just could not put it down. I liked the French detective, Jean-Baptiste Adamsberg, very much indeed, with his unusual way of doing things and his almost lazy approach to his work. Not only that, it was interesting meeting his second in command, Danglard, who drinks too much and freely admits he's 'no good to anyone come four o'clock in the afternoon'. I also found Vargas's other characters well rounded and different, Mathilde and her blind friend, Charles, particularly, and 70 year old Clémence who's adicted to the small dating ads in the papers. All nicely drawn.

The mystery itself was excellently done with a few twists and turns and bizarre occurances. I had suspicions of what was going on as I went along and in the end I was sort of right - but sort of not. It was quite complicated and I had to think hard, which is always fun.

I don't really have any complaints. I kind of wish I'd been to Paris and was familiar with the city's atmosphere and streets, but I haven't so there you go - it made no difference as far as I can tell.

The book was beautifully translated from the French by Sian Reynolds. This is the first in the series but I gather they haven't been translated in order, not that that has anything to do with the price of fish, but it is odd. I certainly plan to track down the rest of them and am looking forward to it immensely. I love the fact that I have about half a dozen different crime series on the go, that I'm really enjoying, and can dip into throughout the year.
Posted by Cath at 14:15

wow! so now my sis is a speed reader? lol lol

Glad to hear you liked it!! It's been exactly a year since I read that and I sooo need to get on to the next book!

Ok, Cath, you've hooked me. I have not heard of this author at all, but it sounds fascinating. I'll have to look around and see if I can find it. And...like you, I love to have all my mystery series around and know that I can pick and choose as to what to pick up next. Sigh. Lovely.

Pat: yup... seems I can do it if I really try. Up to now I've only been able to speed read Harry Potter. LOL!

Nicola: I loved the book, and such a good mystery too. I'm hoping to read the series this year if I can. The trouble is I'm discovering so many excellent new authors.

Kay: My turn to convert you to an author!! But I do think you would like this one. And yes, 'lovely' is so much the right word to describe having good books to choose from. It's a very warm feeling.

I started reading Have Mercy on Us All, which is another Adamsberg novel, but not the first. He's an interesting character, isn't he? Since I'm coming in on the series out of order it's a little disjointed not having his background in mind, but probably not all that necessary really. I like what I've read and am looking forward to getting back to it!

Danielle: I think you have the second book there, which was actually the first of the series to be translated. Very odd. I have book four on my library pile and plan to read it without reading books two and three. I can't imagine it'll harm but the pedantic side of me is unhappy about it. LOL.

Yes, he is rather interesting, and interesting that he's from the foothills of the Pyrenees rather than Parisian or something. I liked the alcoholic second-in-command too.