I don't really play the 'blame game' with points where reading books is concerned, but if I did I think Kay at My Randon Acts of Reading would be streaks ahead of the competition. The Crossing Places by Elly Griffiths is yet another of her reads that she wrote about here, that, once I'd read her thoughts, I really could not wait to read. Luckily, the library came up with a copy. 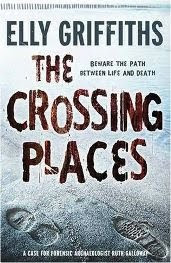 Ruth Galloway is happy with her life. No one else seems to be - her parents, friends, colleagues, all feel there should be a man in her life, that she should lose weight, and that she ought to move away from the isolated spot where she lives on the saltmarshes of the North Norfolk coast. But Ruth is content with her job as an archaeology lecturer at the local uni and with her life in her own little cottage with her two cats.

Into her life comes Inspector Harry Nelson, a brusque northerner, who needs her to look at some bones recently discovered buried in the saltmarsh. He is hoping it might be the remains of Lucy Downey, a child who went missing ten years ago. It's not, it's the remains of an iron age body, probably a ritual sacrifice, but it opens the door for Nelson to ask Ruth's opinion of the letters he's been receiving about the Downey case - possibly from the potential murderer.

Life suddenly becomes complicated for Ruth as she tries to juggle work with helping the police, and the situation is not helped by the memories being stirred up of what she herself was doing ten years ago. She was involved in a dig on the saltmarsh with a group of people, and the various relationships were very intense... and still are. Is there a connection between that dig, with the discovery of a henge, and the disappearance of Lucy Downey? Could one of the group she was, and still is, very close to possibly be responsible for this awful crime? And then, just when Ruth thinks things could not possibly get more tangled, another child goes missing...

This is the first book of a new series about professor of archaeology, Ruth Galloway. Book two The Janus Stone is just out I believe and I couldn't be more pleased as I really enjoyed this first instalment. I think the reason for that is probably Ruth herself. I love the fact that Elly Griffiths didn't make her glamorous and gorgeous but decided instead on someone very ordinary - an overweight woman who likes her own company and tells it like it is. She very much has a 'take me or leave me' attitude and that is so refreshing. That's not to say she doesn't have conflicts in her life. Her born-again Christian parents drive her nuts, her friends hint that her life might not be all that it could be, and work can be a real pain. She's real in other words and that's wonderfully easy to identify with.

The mystery aspect of the story was good. I have to admit I knew who the culprit was very early on, but it didn't spoil my enjoyment and there were other aspects to the story that, quite frankly, were just as fascinating. Especially the setting of the North Norfolk coast which I felt was very well done. It's bleak and it's lonely and the atmosphere of the place was beautifully depicted. I'm no archaeologist so I can't speak for the accuracy of those particular details; for a layman like myself they felt fine - an expert might not think so.

It did take me a little while to get used to the fact that the story is written in the present tense. That was slightly odd but, once used to it, I found I wasn't bothered and it actually added to the suspense in the end.

All in all a very good read and I'm looking forward to reading book two in the series as soon as possible.

Back to books
My Random Acts of Reading
Posted by Cath at 11:07

Yeah! Another fan of this series. I totally agree with everything you said. I just finished The Janus Stone recently and loved it even more than this one!

Cath, I'm so glad you enjoyed The Crossing Places. I'm always a little worried when someone says they will read a book based on my recommendation. What if they hate it? :-) I'm like that about restaurants too.

You wrote a very informative review and I couldn't agree more with what you said. I'm reading The Janus Stone right now, about 20% into it, and I'm being sucked right into the story and into Ruth's life again. Lovely!

you must have enjoyed it you went thru it pretty darn fast !! lol.. I am trying to stay away for series that I am not already into! yeah yeah I did say TRYING..
but I am doing rather well "not buying" but 2 books to series I am into come out this month..groan. lol

Hi Nicola. Have you reviewed this book on your blog? Would like to read it if you have...

Can't wait to read The Janus Stone now, must check the library catalogue.

Kay: I know what you mean about recommending books because once or twice I've slipped up and praised something a friend has hated. Ouch! But these days I tend to know who likes the same books as me and our tastes seem to coincide where crime is concerned, so I was not worried.

I'm hoping my library will already have The Janus Stone...

Hey Pat! Yeah, I did like this one a lot... a real pageturner. I hardly needed a new series either but am lucky in that I have access to a library and that makes a lot of difference expense-wise.

Perhaps the two new books will make you feel like reading again.

Yeah, I did review it. Here ya go:

Thanks, Nicola. I just added a link to your post to the end of mine.

Ooo! That's going on the list of things to watch for at the library!

Caitlin: it's well worth keeping an eye out for - hope you find it.

Guess what I *just* picked up from the library earlier today? I also requested it on Kay's suggestion! I've only skimmed your post as I like not knowing too much about the book before I read, but am happy to see you liked it as well. I've started reading and think I am going to like Ruth very much!

Danielle: I hope you enjoy Ruth as much as Kay and I did. I have book 2 on reserve at the library and really can't wait.

Another book to my list! You and Pat always add some for me......this one does sound perfect, doesn't it? I hope it's out here!! thanks, Cath!

Good luck with finding it, Susan. From what I can gather it does seem to be available in libraries in North America.