I'm a few days late with this but as I've had yet another week of illness I'm going to excuse myself. ;-) The Terry Pratchett challenge which has been taking place over the last year and hosted by Marg, came to an end on the 30th. November. 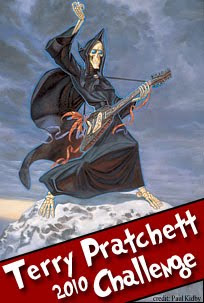 I had my doubts, towards the end, that I would manage to complete it, but pulled out all the stops in the last week or two and actually managed to read the 6 to 8 books I signed up for.

My final 2 books were Thud! and Sourcery: 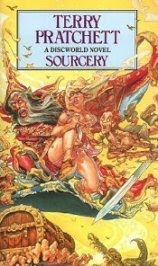 There was an eighth son of an eighth son. He was, quite naturally, a wizard. And there it should have ended. However (for reasons we’d better not go into), he had seven sons. And then he had an eighth son… a wizard squared…a source of magic…a Sourcerer. SOURCERY SEES THE RETURN OF RINCEWIND AND THE LUGGAGE AS THE DISCWORLD FACES ITS GREATEST – AND FUNNIEST – CHALLENGE YET. (From Amazon)

Very enjoyable. So strange that I only decided to give the Rincewind books a try for this challenge and now I really like them and am glad I still have a good handful to read, including the beautifully illustrated, Last Hero. 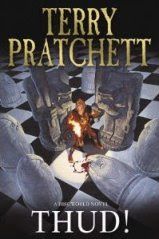 There's been a murder amongst the dwarves in Ankh-Morpork, but the dwarves don't seem to want to admit to it. And the aniversary of the battle of Koom Valley is fast approaching, where the trolls fought the dwarves, and it's unsettling both modern day factions in the city. They're spoiling for a fight and it's complicating Sam Vimes's investigations into the murder that may or may not have been committed. Add to that Sam's other committment, which is to read Where's my Cow? to his one year old son every night without fail, the Patrician's insistance than he take on a vampire constable, an impending inspection of the force, and Sam's life is suddenly far more complicated than he would like it to be...

Wonderful. Loved it to bits. There's the usual wonderful group of characters that inhabit the Vimes books, Captain Carrot, the rightful king of Ankh-Morpork, Angua, the were-wolf, Nobby Nobbs (who I just can't picture as anyone other than Tony Robinson) and several new ones including 'Sally' the new vampire officer and A.E. Pessimal, the inspector. I adore this series within the Discworld series and am crossing my fingers that there will be more.

Anyway, so those were my last two books for the challenge. In total the books I read were as follows:

Nation
The Colour of Magic
The Light Fantastic
Sourcery
The Nightwatch
Thud!

I enjoyed all of them without exception and would like to thank Marg for giving me the opportunity to catch up a bit with Terry's books and, of course, for hosting the challenge.

the only one i've read is the one you had sent me. I just have so much other books right now (111 tbr!) that I don't want to start on anything new! but glad you finished your challenge!!

right now I am reading about a zoo right near you in Devon!! the Book is "I Bought a Zoo" its about the family that bought Dartmoor Zoological Park... is that near you?

Sam Vimes is my hero - I just love all the books he appears in.

Hey Pat! Yeah, I was pleased to finish the challenge, especially as my record with challenges this year is not that good. Only Carl's two completed I think.

Not sure how far that zoo would be from us as I'm not sure what part of Dartmoor it's in. At a guess I would think it's maybe an hour away.

GeraniumCat: Oh yes... Sam Vimes is one of my fictional heroes too. One of Terry's best creations, imo.

I still have a nasty cough but am slowly recovering from the flu type bug and chest infection. It really did knock me for six. Thank you for asking. :-)