Well, it seems today, the 19th. July, is my five year blogging anniversary. Who'd have thought, way back in July 2007, that I'd still be here (more or less) doing my book reviews and chatting away to old friends and new. I took a look to see who was commenting back then and was surprised to see a number of people who are still here with me and that I regard now as friends. Amazing. And wonderful.

Okay. Well, I finished another book (don't faint)... read it rather quickly as a matter of fact as it was one of those page turning stories that gripped you by the throat and wouldn't let go - The Killing Kind by John Connolly. It's book three of his hugely popular 'Charlie Parker' series. 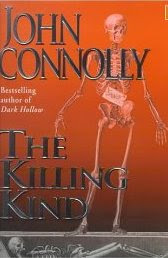 Charlie Parker is of course a private detective in the state of Maine in the USA. Two years before this book takes place his wife and daughter were callously murdered by a psychpath: Charlie tracked him down to Louisiana and killed him. After the events in book two where Charlie tracked down another serial killer, he is now trying to live quietly in Maine, taking only corporate cases that hopefully mean he might live into old age.

Others, unfortunately, have different ideas. US senator, Jack Mercier, wants to hire Charlie to investigate the death of the daughter of an ex-business associate, Grace Peltier. The young woman was shot in the head, in her car, and the death was supposedly suicide. But there are suspicious circumstances, not least of which is that Grace Peltier was investigating a secret religious sect, known as The Fellowship. It's not long before Charlie discovers links with a group of people known as the Aroostock Baptists who set up a small commune in rural Maine in the 1960s, stayed there for six months and promptly disappeared off the face of the earth. Then a mass grave is discovered... Someone leaves a nest of killer spiders in his mailbox... and thus another connection is made with the death, in Minnesota, of an abortionist doctor who was killed in her car by poisonous spiders. Charlie realises he's opened a can of worms... or is that a can of spiders?

It seems that before she died Grace Peltier took something from The Fellowship and they want it back. Charlie has no idea what it is and a prime witness has gone to ground. Charlie is intimidated by the frightening arachnophile, Mr. Pudd. Who is he? He's also haunted by the ghosts of a small boy with a wooden sign around his neck and a woman in a summer dress. Louis and Angel, his genial killer friends, help him unravel this frightening mystery but in doing so they put themselves into extreme danger and, worse for Charlie, the life of Rachel, the new woman in his life, is also threatened. People start to die horribly and Charlie knows it's a race against time to find the missing witness before everyone he loves is wiped out.

Well, I have to say that I wouldn't like to live entirely on a diet of books consisting of just these Charlie Parker stories. LOL. They are intense, frightening, roller-coaster, type reads and at the end of them you need something like a Daisy Dalrymple yarn to bring back some normality. John Connolly writes horror very well indeed. His short story collection, Nocturnes, is one of the best horror collections I've ever read. He brings this startling talent for the macabre to bear in this series. They're unlike anything else I read. The crimes and the killers remind me slightly of Tess Gerritsen's Rizzoli and Isles books. She pulls no punches when it comes to depicting the sheer horror, sickness and intelligence of the serial killer that can't be caught. But Connolly adds an extra dimension... a supernatural, macabre element which scares the reader witless. I can't read these books in bed at night, I'd never be able to turn out the light. And they are *not* for everyone. Not by a long chalk. I would say, think carefully before you pick one up, be warned! On the other hand if you really like a bit of gritty crime laced with horror, then by all means, 'go for it!' You won't be sorry.

One interesting thing, John Connolly has a new book out next month. It's entitled, Books to Die For and is a book of essays by popular crime writers recommending their favourite crime authors and books. The FantasticFiction link is here. I'm pretty sure I'm going to be wanting that.
~~~oOo~~~
Posted by Cath at 08:51

Happy Anniversary! Here's to the next five years.

woohooo! and to think you met not only friends but a "sister" too!!!
Hard to remember when we began so long ago and so hard to believe that we are still at it years later! I wonder if that has any meaning? Oh well I know it means we meet people along the way of our own life and that's not to shabby.

Careful what you read it won't be long until RIP!! wow..could the years go any faster? *sigh*

Cath, a very happy 5th blogversary to you! I'm pretty sure we started commenting together right around the time you began or not long after. Isn't it amazing that we're still here?

By the way, I have the first book in the Charlie Parker series on my Kindle. I'm pretty sure I bought it on your recommendation. Still haven't read it, but hopefully soon. This series sounds like something I would like very much.

Happy Anniversary - keeping a blog going for five years is quite an achievement when you have a busy life! Not sure I would manage five months!
Glad you are liking John Connolly! As you say he is not for everyone but I adore the Charlie Parker books and am at the stage of reading each new one as fast as the library can get them in when they are published! Lucky you having so many to catch up with!

Congratulations, Cath - hope there are many more years of blogging to come! I began my blog in 2007 too - amazed I'm still here.

I've never read any of John Connolly's books, even though The Book of Lost Things has been sitting on my bookshelves for a few years now. Not sure I'd like his Charlie Parker books by the sound of them.

Congratulations on getting to five years, that is some achievement!

It is just so difficult to work out where all the time has gone to, the days and months just seem to fly by!

'Every Dead Thing'is about the only John Connolly I have read and seeing as that was his first published book, I must have read it quite some time ago.

I can't even remember why I didn't read more of his work, maybe I am just one of those people to whom he doesn't appeal!!

I have been reading so much more out of my depth just lately, with genres and storylines which stretch my mind to the full, so that perhaps now would be a good time to give Connolly another try. Some of those storylines do sound quite intriguing.

Happy 5th blogging anniversary Cath! We're the same age, believe it or not, our blogs could be twins! at least in the same year! lol I began in October though, so not twins.....Congratulations on making it this far, and yes to the lovely, kind and generous friends here in the blogging community (you're one, you know).

Geez, another book for my pile! I really have to read the first one, I own it, in the Charlie Parker series. You've made me very curious about Nocturnes too, if it's a horror collection you rave then I've got to take a look at it!

I am like you, for something dark like this, I have to read something lighter after, just to balance it out a bit.

Lovely review, Cath. And really, I hope you and your blog are having some cake today!!!

Happy anniversary, Cath. 5 years is quite a fete. Selfishly, I hope you have many, many more as I enjoy hearing about your travels and reading your reviews, such as this one.

Books to Die For sounds interesting.

Still not quite sure about Connolly, though - this one sounds a bit spidery!

Pat: Yep, I also found a sister. You started to comment a couple of months after I started, for RIP I think. I've met people through blogging that I never would have known otherwise because they live too far away.

Yeah, that John Connolly book would have been perfect for RIP. But I can read another in the series for that as the whole thing is creepy. Might just do the journey this time and take the pressure off myself. I failed miserably at OUaT! But it would have been fine if I'd stuck with the journey as I did read 2...

Kay: Thank you. yes, you were one of the first to comment on my new blog. You, Nan and Tara from Book and Cooks who seems to have stopped blogging altogether now.

I hope you like Charlie Parker when you get to him. Most people who try them like them, but care needs to be taken as they are not cosy mysteries. LOL.

Liz: Thank you. Yes, I suppose 5 years in not bad.

There seems to be a lot of Charlie Parker fans about. I can't wait to get more. Annoyingly, my library should have my next one - The White Road - but neither myself nor the librarian could find it last week. I was rather gutted about that.

Margaret: Thank you. yes, I think I'm abit amazed I'm still here too. I can vividly remember posting my first post and how nervous I was.

I think the thing is to judge whether you might like a series of books by what people whose judgement you trust say. I would not recommend these books to anyone who does not like to be really frightened by a book. And if people think they might not like them then I would certainly advise them to keep away. Honesty is the best policy with books, imo.

Yvonne: Thank you! I think this year is going particularly quickly. A bit scary to be honest.

I actually have not read that first CP book, Every Dead Thing. But I've coped ok because the next books give plenty of info about it. Maybe you decided they weren't for you.

Yes, he does do particularly intriguing storylines I think. You wonder where authors get their ideas from sometimes.

Susan: Thank you! Blogging has opened up such a wonderful world for me... delightful people like yourself, that I would never have known, but also books I never would have thought to read if I hadn't read about them on people's book blogs.

I have a feeling the CP books would be your kind of thing. You love crime and you love horror. What's not to like? LOL. They're sort of a mix of Merrily Watkins and Rizzoli and Isles.

Penny: Thank you so much, that's so nice of you to say.

Books to Die For does sound great, I'm definitely going to be getting that.

I understand your reticence about the Connolly books, but if you like Merrily Watkins and Rizzoli and Isles then you would like these. I seem to recall that you read Merrily but can't recall whether you like R & I or not.