I was introduced to Nevada Barr's Anna Pigeon series of books at the end of last year when I decided to read my way around the USA. Several people recommended the crime series that features park ranger, Anna Pigeon, because each book takes place in a different American national park. And so it was. I read the first two books and learnt a bit about the Guadalupe park in Texas and New Mexico and Isle Royale on Lake Superior. This time, in book three, it was the turn of the Mesa Verde national park in south western Colorado and the book was Ill Wind. 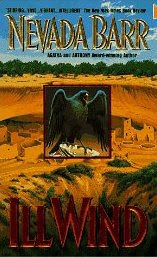 Anna has moved on from Isle Royale for personal reasons and is now settling into a new job with new colleagues. She finds herself in a bunk house situation, sharing with much younger women than herself. She's not happy. Not only are the women immature, party animals, Anna has had to board out her cat, Piedmont, as no pets are allowed.

She finds some solace in the park though. It's a fascinating place full of mystery. A native tribe known as the Anasazi had lived there and built wonderful cliff dwellings, despite the hostile environment and the difficulty of building such houses into a cliff.

Then, in the 13th. century, they suddenly disappeared without trace and no one has any idea what happened to them, although various theories abound.

Anna finds her new colleagues to be a mixed bunch. The one she feels closest to is Stacy, a male ranger who actually seems to be intelligent and thoughtful, something unusual in Anna's experience. He is married though, with a difficult homelife and he's not the only one, difficult marrital situations are two a penny in the park it seems.

When Stacy's dead body is discovered, neatly laid out in amongst the dwellings, Anna is devastated. Recovering from a drinking binge she decides to investigate herself. It seems there are mysterious goings on in the park. People have reported weird 'veil' sightings they can't explain. Anna discovers that there are an unusual number of medical rescues from a certain part of the park, all on the same day of the week. And then an asthmatic child dies as part of this anomaly and Anna realises she's on to something... but what? Nothing seems to add up or make sense and her own personal demons do not help the situation one little bit.

Well, this was another good book in this, in my view, quite unusual series. Unusual in that the mystery setting is not a huge city or a country house or whatever, but the national parks of America. I absolutely love this idea to bits and have really enjoyed the three areas I've been introduced to via these books. Saying that, I didn't find myself as fascinated by the Mesa Verde as I did the areas covered in the first two books. I don't know why, because the mystery of the disappearance of the Anasazi tribe is right up my street, and I've always been fascinated by the native American indians. Plus, Colorado is a state I've always fancied visiting but have never been fortunate enough to do so. Thus, I should have been in my element, but wasn't. But that's fine, I suspect this will be the case as I go through the books, some regions will grab me, others won't.

I think I'm rather addicted to these vintage American travel posters...

All that said, this was still a book I romped through with a great deal of pleasure. Anna is a great character, flawed, but a good ranger and always determined to get at the truth. I love her sister even though she's only ever been on the end of the phone. Hopefully we meet her in person one day. It can sometimes take a little while to get all the new characters straight - who they are, who they're married to, what their personal circumstances are, their hang-ups and so forth. But it's well worth the effort. These books are exciting, unusual, crime yarns and I'm so glad that several people recommended them and I gave them a go.

The next book in line is Firestorm, which I've heard is rather good, and it's on the shelf waiting for me for when I'm ready to read it. It's set here:

These sound rather good, and something a bit different. I've always been intrigued by the Anasazi, but I think I might like to start at the beginning (for a change!). The first seems to be available on Kindle, though not at the library, and I think it would really suit my mood right now.

I'm glad you are still enjoying visiting with Anna and our National Parks. I can't really remember my reaction to ILL WIND. I have visited Mesa Verde at least twice. I found it fascinating.

FIRESTORM is very good. Fires in California (a yearly occurance) in that one. My personal favorite - BLIND DESCENT - set in Carlsbad Caverns in New Mexico. Enjoy, Cath!

Never heard of these before...you're adding to my list again :0)

I read FIRESTORM shortly after the firefighter credited with saving the town of Show Low, Arizona from the Rodeo-Chedeski wildfire was fatally burned in another fire. Reading one particular scene in Barr's book and knowing what happened to Rick never fails to bring tears to my eyes. I've never thought of the term "shake and bake" in the same way ever again.

ok.. so... it's safe to say you know more of american than I do! lol.. meanwhile I keep reading murder and mysteries in England.. hmmmmmm....are we odd or what? lol

This author is still on my reading list, along with so many others, however I am pleased that you are still continuing to enjoy this series of books.

Like yourself, I also love to look at old posters an advertising literature and visiting 'The Robert Opie' museum, when it was based in Gloucester Docks, was such an interesting experience.

By coincidence, in the charity shop where I volunteer, we had donated on Saturday, a book containing nothing but illustrated plates of American advertising campaigns from 1900-1916. It was so interesting that I nearly bought it, but it is also very large and I could foresee trouble brewing at home, if I turned up with it!!

Geranium Cat: Library-wise I found the Anna Pigeon books quite hard to get hold of. Mine has 4 or 5 in the series, scattered around Devon, but I had to buy the first one for my Kindle. I've bought 2 from AM and will get the rest from wherever is easiest as they're not too expensive. I hope you like them if you do give them a go.

Kay:Very impressed that you've actually been to Mesa Verde! Yes, I've heard that Blind Descent is quite good. I'm really looking forward to quite a few more to be honest.

Val: Sorry. ;-) The posters are like our Railway posters, which is why I like them I think.

Cathy: That's an incident I haven't heard about but it sounds tragic. We owe such a lot to our firefighters.

Pat: Well... *maybe* but you certainly know more of Victorian London that me, so I reckon we're quits. ;-)

Yvonne: I know how it is... so many authors and not enough time, so I understand completely.

Oooh... I'll put that museum on my 'plan to visit one day' list. I hadn't heard of it before. We've never been to the Gloucester Docks area but I've heard it's an excellent place to visit.

The book sounds wonderful but I understand why you had to resist temptation!

I love seeing all your poster pins on Pinterest. Wish we could find the real thing to collect! I have not read Nevada Barr. I thought she set her books in the southwest which is not a setting I like. I do love the National Parks though and have been to many of them. I will have to put her on the radar for the new year.

I read Ill Wind and can't really recall it either. It's not the one where they end up in the cavern - that book haunts me to this day, as do several in the series. Fire Storm is quite good too. I am up to Winter Study in this series, which reminds me, I haven't read an Anna Pidgeon mystery this year yet! can I fit it in by Christmas???

I'm glad you are really enjoying this series, they are different, with her being a park ranger, and the settings, which I find I really respond to. I think I'd secretly like to be a park ranger too!

Another mystery series for you to love and read! See, you do like mysteries very much after all! :-D

PS just read Kay's comment - yes, Blind Descent is the one I meant that haunts me to this day. Can't wait til you get to it!

Peggy: I'm quite obsessed with putting the American travel posters on Pinterest. Keep finding more and more and all so beautiful!

The Anna Pigeon books are set all over the USA. The first was Texas, (loved it), the second was Lake Superior (loved it too) and the third was Colorado. I think the series is well worth trying.

Susan: Yes... you can fit an Anna book in before Christmas! LOL. Once I start one I can't put it down.

It's a pity there isn't a similar series set in Canada as I would *love* that!

*Laughs* Believe it or not I think crime stories and mysteries are now my favourite kinds of books to read.

Can't wait to get to Blind Descent as I love books set underground in caves and tunnels. Especially anything a bit scary.

Glad that you are enjoying the Anna Pigeon books.
They aren't that easy to get over here but at least with the internet, you can find the American editions.
I was glad that I didn't read Blind Descent before I had to go pot-holing for a work assignment or I would have been even more terrified than I actually was!

Liz: Yes, I bought the last two from Amazon Marketplace fairly cheaply so am happy to keep doing that, although Devon libraries does have several.

Pot-holing must have been an interesting experience!