I Know Why the Caged Bird Sings

Part of the reason I signed up for The Southern Literature Reading Challenge, which is being hosted by The Introverted Reader, is because I'd just started I Know Why the Caged Bird Sings by Maya Angelou, and I realised I wanted to read more books in this vein. This challenge would present the perfect opportunity to do just that, not that I couldn't do it off my own bat but it's always good to have an incentive. I'm now really pleased I signed up for it because if Caged Bird is typical of some of the books I might discover then I think I'm in for a real treat. 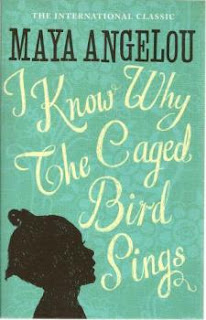 Maya Angelou was born in 1928 in St. Louis, Missouri. Her parents' marriage fell apart when she was three and her brother, Bailey, four and her father sent her and her brother off to Stamps, Arkansas to live with his mother. Maya's grandmother came to be called 'Momma' by both the children, neither of them able to remember their real mother and father at all as they grew. 'Momma' ran a grocery store in the black area of the town, so although the family were not by any means rich, they were not as poorly off as many of their neighbours whose main employment was cotton picking and who existed at subsistence level.

Maya and Bailey are reasonably happy living with their grandmother and Uncle Willie, who is disabled. Bailey is Maya's rock and they face the world together, finding humour in various situations, and trying to understand the difference between them and the white folk. It seems even the poorest of the whites are better than them and it's quite permissable for their children to stand in the store and mock Maya's grandmother and none of them can do anything about it.

A few years later - Maya is eight - their father arrives out of the blue. The children soon realise that he's going to take them away with him and they will at last meet their mother, though she does not now live with their father. They live with her for about a year; their stay comes to an abrupt end when something traumatic happens to Maya and she stops speaking. Back they go to their grandmother. Maya will only speak to Bailey - this lasts for years - until a woman called Mrs. Flowers comes into her life and introduces her to poetry and literature. Maya has always been a keen reader but now she has focus in her life and something to retreat into when things get unbearable.

The children do eventually return to live with their mother. By then they're teenagers and things are very different. For a start they are now living in San Francisco and although blacks are still second class citizens, there is in California a lot more room for manouevre than there was in Stamps, Arkansas.

Hard for me to know what to say about a book which is probably one of the most iconic pieces of literature to come out of the southern states of the USA. And such an author! This about sums it up: 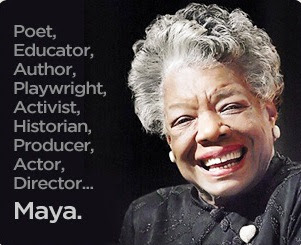 I suppose the first thing to admit is that as a white person, this book made me feel very uncomfortable. I know this was the 1930s and things were very different back then, but injustice is injustice and just because it was eighty years ago doesn't mean I was able to think, 'It's history, it doesn't matter any more'. Several episodes stick in my memory. The white kids mocking 'Momma' and Maya feeling completely helpless; the awful thing that happened to Maya, which I won't into as I don't want to spoil it for other readers; what happened when Maya needed dental work; the Graduation when Maya was twelve and a white dignitary made a speech basically telling these black kids that it didn't matter how well they did at school, all they were good for for waiting table or being servants in white people's houses or, if they were really lucky, they might become sports stars. A lot of it made me feel quite murderous to be honest.

The other thing that sticks in my mind is Maya herself. Her determination not to be cowed by the circumstances of her childhood, her strength, her dignity, her belief that she was as good as anyone else whether her skin was black, white or something inbetween. She became the first black person ever to be a streetcar conductor in San Francisco for instance. They didn't want to employ her but she kept at them and eventually they hired her. I love that kind of bloodyminded persistance, to my mind it's the only way to bring change about and I admire her so much for that.

The book ends when Maya is fifteen or sixteen. I'm not going to say what life-changing thing has happened, you'll have to read the book... though I suspect most people already have. There are five autobiographical volumes altogether - or maybe six - and I hope to get to all of them this year. This is the only one I'll use for this challenge though as I want to vary what I read for it. I will however be adding this to my own 'Read around America' personal challenge.

wow.. that's a good start ! Can't say I ever heard of a "series" being a biography! wow. Overcoming is so very hard. No matter what it is you manage to overcome it is life altering.

I just read the first 15 pages on Clara Bow (silent movie actress) it was things she had to face as a child that drew me in immediately! we have it so "easy" in comparison and yet people don't seem satisfied/ content/ or happy.

Pat: No, I never heard of a series of biographies either... *although*... didn't Dirk Bogarde write a whole load of them? So it's not unknown.

We have so much compared to what they had back then. I need to read stuff like this to remind me of that.

I have read "I Know Why the Caged Bird Sings', Cath, many moons ago, and remember it so well. I admire Maya Angel Angelou; her perseverance, fortitude, dignity, grace . . . much more to be admired for that I can say here. You might want to read more of her in time.

I read this book long ago and it made a strong impression ...when I read it I could hear her distinctive voice in my head (I can still here it now)

Her interview with James Naughtie can still be found here (if you haven't heard it before)
http://www.listenersguide.org.uk/bbc/podcast/list/?programme=bc

It is embarrassing how long this book has been on my TBR pile!

Penny: I certainly plan to read the rest of her autobiographies and may look into her other writings as well.

Val: Noooo, I haven't heard that interview. I'll listen to it later. Thanks for the heads-up.

Kelly: I have hundreds of books I'm embarrassed about too. LOL!

I haven't come across this book before, however it does sound like an emotional and yes, probably uncomfortable read!

I can always remember watching the television adaptation of 'Roots', as a child and feeling uncomfortable about some of the images, even back then in the 1970's, when the world still hadn't completely changed its perspectives about colour and creed.

Perhaps I shouldn't say this, but we have noticed that in certain Southern US States, racial injustices, still exist and so close to the surface, as to be palpable and yes, it still makes for those uncomfortable feelings I remember from childhood.

I would be interested in your thoughts on any of the subsequent volumes in the series, should you decide to read them, just to get the sense of when Mary feels that attitudes started to change for her and just how far she still thinks things have to go.

Hope that you are safe and warm in this sudden snowy spell ... 4 inches in as many hours, here in Somerset, although it seems to be easing off now!

I have not read Maya Angelou at all. But this post makes me want to. I was born in the north but I grew up in the southern US. There is still so much underlying racism there, more I think than anywhere else in the states. I detest it. It's one of the reasons I don't have any desire to live in the south again. I know people who still fly the Rebel flag and hate blacks and say they are Christians. The two just can't exist together. Boggles my mind!

I'm glad you liked it! Maya Angelou is coming to my town to speak for a Martin Luther King Day observance. It would have been so amazing to see her. My husband tried to get tickets through his job, but it just didn't pan out. Good luck reading the rest of her autobiographies! I intend to get to them someday...

Yvonne: Roots was such a fantastic series; Desliy did a post about it only a couple of weeks ago funnily enough. And yes, very thought provoking even in the 70s when attitudes were still rather entrenched.

I've only visited a few southern states, Virginia and West Virginia, Tennessee, North Carolina etc. and wasn't in one place long enough to see how things really were. My main observation about those states was how polite everyone was to two wandering English people... though I would also say that was the case wherever we went in the States... just *extra* in the south.

We haven't had any new snow but it's still a couple of inches deep all over the garden. Hope you can get around where you are.

Peggy Ann: You seem to bear out what Yvonne says about attitudes not changing all that much even now. I too am not sure how anyone can say they are Christian and then hold views that indicate they think they are somehow better than other humans who just happen to be a different colour. To me that's just twisted.

Jen: Oh gosh, I would kill to see Maya Angelou speak and really feel for you that you can't. :-( Hopefully I can get to at least a couple more of her books this year.

Many years since I read this but I remember that I was moved by it. I've since read every volume of Angelou's autobiography but this is the best.

Wonderful review, Cath. I haven't read this one yet, though it is on my list to read one day.

Nicola: I definitely plan to read the rest, though perhaps not all in one go.

Susan: It's really worth trying at some stage. I was surprised at how much I loved it and how easy it was to read.