Carl's Once Upon a Time VII challenge is a week or two short of halfway through now, and I've just finished my third book. It's not brilliant progress but good enough and I'm quite a happy bunny - three out of five is not bad at all. There are other things I want to read so mixing those up with some good fantasy works for me.

Anyway, my book three is Moon Over Soho by Ben Aaronovitch. 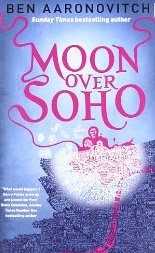 Detective Constable Peter Grant is the first new wizard apprentice in many years. His boss, Thomas Nightingale, wizard, and also a police detective, was injured in the events of the first book and is still recovering. As is Peter's friend and colleague, Lesley, only her injuries were much worse than Nightingale's in that her face was almost destroyed.

Peter is on the way back from visiting Lesley when he recieves a call from Dr. Walid to come to the hospital and examine a body. Cyrus Wilkinson was a jazz player, as was Peter's father, and Walid suspects suspects that there is something magical and therefore wrong about his death. It doesn't take Peter long to sense a vestiga, an imprint that magic leaves on physical objects, and then he hears a saxophone solo of an old 1930s song coming from the body. It's Body and Soul, a jazz classic and well known to Peter, a bit of a jazz expert. It's not his kind of music but he knows a lot about it having been force-fed it since childhood by his jazz playing father.

The problem is, has someone murdered Cyrus *with* magic or was Cyrus a magic practitioner who accidently killed himself? Peter is also called to join another investigation whereby men are being killed in rather explicit sexual situations. Peter wonders if there might be some connection between the two cases. It's not long before two more jazz players are killed in mysterious circumstances and Peter has to call on his father for help. He has also not been able to avoid getting involved with Cyrus Wilkinson's girlfriend, Simone. He knows he shouldn't be doing it but for some reason is unable to resist. It seems there are monsters stalking Soho and Peter is about to be very deeply involved in some very dubious goings on indeed and stretched to the very limit of his capabilities.

Well, this is only my second book in Ben Aaronovitch's 'Rivers of London' series, but it felt like returning to an old friend. I'm not sure why. I don't feel any particular connection to his hero, Peter Grant, who is young and, to be honest, a trifle shallow. But that's easily made up for by other things. Firstly, the London setting. The author clearly knows the city very well indeed; I don't, but know it well enough to be able to really enjoy the bits I do recognise. It's fun following Peter's footsteps and thinking, 'Ah yes, I can picture that road or that bridge or that landmark'. It greatly adds to the enjoyment.

The humour is also a big plus, the author is a talented comedic writer - Terry Pratchett springs to mind - and I found myself laughing quite a lot. It's great that the book doesn't take itself at all seriously... there's a scene where Peter thinks Nightingale is going to give him a hug but they both remember, just in time, that they're English... small scenarios like this are so perfect and underline the very Englishness of these books. They're full of references to English culture too and I like that a lot.

Aside from this there is a good imagination at work here. I like the introduction of magical beings, some of them rather bizarre, others quite sinister. The sinister aspect seemed to come to the fore towards the end of the book and I wondered if this is the direction in which the books are heading. I hope so, though I still want them to make me laugh of course.

The theme of this book is jazz, something that really doesn't interest me much, but it didn't matter in the slightest. I wanted to continue reading regardless of how little I knew about that type of music and, for me, that's the mark of a good author, if he or she can make you read about something that might normally turn you right off.

I'm going to add just one little warning. These books are not for children or even really young adults. Older teens yes, fine, but not younger ones. There are scenes of a sexual nature, as they say on the TV, nothing offensive if you're an adult, but I wouldn't give them to a child to read.

I'm truly looking forward to the next book in the series, Whispers Underground. I have it on my library pile and will be reading it later in the month for this same challenge.

you write really good reviews Cath. my brain doesn't retain enough to do that sort of review lol.. (which is why I use Amazons). Anyway.. it must be a good book for you to like it even though you are not thrilled with the main character or the theme of jazz! interesting that you found a connection to Terry Pratchetts humor in the book.

I hope your next book is as enjoyable be it for OUaT or not! :o)

I know just what you mean about returning to an old friend and how it's surprising because the books don't really reflect your interest. I don't like jazz and agree with you about Peter. But I like Nightingale and Molly lots, and I really enjoy the places. The next one is good too :-)

Sounds very inviting ...thanks for the audience warning (appreciated)

This is not the type of fantasy I normally read, but it's interesting getting to find out about a new series.

Thanks, Pat. I find I need to do the review quite quickly after I finish the book, or like you, my brain doesn't retain the info and I forget what I wanted to say. LOL

I'm now reading Casting Spells by Barbara Bretton. I wasn't planning to read it for OUaT as I thought it was more crime/horror but in fact it's a kind of cozy mystery with romance, knitting, and magical beings like the fae and vampires, so I reckon I can have it for OUaT.

Geranium Cat: Odd isn't it? I'm glad it's not just me. I like Nightingale and Molly too and Lesley. And I suspect Peter is just *young* and will grow up a bit and will interest me more as he does so. Yes, I rather think the next one might suit me down to the ground.

Val: My pleasure. I too like to know these things so that I can rec suitable books to my grand-daughter.

Alyce: It is interesting hearing about various series. In my case so that I can rec them to my family, even if I'm not that interested in them myself.

I would probably not pick this book off a bookshelf because of the magic element but your review makes it sound very intriguing indeed, Cath!

Peggy Ann: Perhaps you might enjoy the crime element of these books rather than the magical.

Geranium Cat: You were right, book 3 is good too. I started it yesterday and finished it today. Unputdownable.

I'm not sure exactly why but this website is loading extremely slow for me. Is anyone else having this issue or is it a problem on my end? I'll check back later on
and see if the problem still exists.

Here is my webpage; car Insurance 2013