It's been a while since I read anything for the Southern Literature Reading Challenge which is being hosted by The Introverted Reader, March in fact, so it was time to read my third of four books. When I first mentioned on here that I was doing this challenge I had a number of suggestions and one was from my friend, Pat, at Here There and Everywhere. She suggested Crooked Letter, Crooked Letter by Tom Franklin as a book she had read and enjoyed. Oddly, a few days later I was telling my husband and youngest daughter about this challenge and they both come up with that very same book! When three people whose opinions you respect come up with the same book you need to read it... trust me on this. :-) 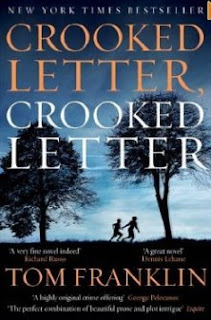 In a town in rural Mississippi a girl has gone missing. It seems this exactly mirrors an event some 25 years ago when another girl, Cindy Walker, also went missing. The man who was suspected of abducting and probably murdering this girl was Larry Ott, at the time aged sixteen. But he was never tried, for lack of any real evidence aside from the fact that he was the last person to see her alive. The town has tried him in their own minds though, found him guilty and ostracised him for all these years.

It seems fairly obvious to one and all that once again Larry Ott has abducted a young girl. One of the town policemen is Silas Jones. He and Larry Ott were childhood friends back at the time Cindy disappeared, an unusual thing then as Larry is white and Silas black. It was at the time when the schools were being desegregated and the school had mainly black kids with a few white. Larry was not popular, not really because of his colour but because he was different, a reader of Stephen King novels, not particularly sporty, a bit awkward, and so on.

In the present day, a man comes to Larry's house and shoots him, leaving him for dead. But he doesn't die: he lies in hospital in a coma. Silas, who has not himself been friends with Larry since boyhood sets about investigating the shooting, soon realising that it ties in with the recent girl's disappearance and the one twenty five years ago. The whole situation is difficult, complicatd by the guilt Silas feels at not contacting or helping his former friend. But perhaps he can now start to put things right? Easier said than done with so many secrets and unknowns still to be discovered...

What surprised me, when I realised it, is that of the almost fifty books I've read since the start of the year, three of the very best are the three I've read so far for this Southern Lit. challenge. Now why's that? It's odd. I can't decide whether it turns out this subject of the history of black Americans is something which fascinates me so much that any book about it can't fail. *Or* the standard of writing by southern authors or authors who tackle the subject is particularly high. I just don't know. All I can say is that Crooked Letter, Crooked Letter is an amazing, fantastic book.

It's not at all a sensationalised book. It doesn't scream hysterically from the rooftops how terrible things were twenty five years ago, it just tells you in its own quiet way that there was ingrained prejudice and that things happened which shouldn't have. But there is another story, that of a white boy, loved by his mother but otherwise not wanted by anyone, even his own father, and who people mentally tried and convicted even though there was no evidence that he'd done anything. People can be devastatingly cruel... people of all colours and creeds.

I loved the fact that the story was told from two different points of view. Larry's sad life was heart-breaking, Silas was more complicated, it was quite clear he had things he didn't want to think about and was being driven by guilt. The story is also told in flash-backs. I'm not a huge fan of that style of writing but it works superbly here and doesn't half give the reader a history lesson! It reminded me a bit of Kathryn Stockett's The Help, another book where you're told matter-of-factly about a very unpleasant period of history and the author gives the reader credit for having the intelligence to draw conclusions for her or himself without whacking you around the head with sensational facts.

This is a crime book but it's almost as though the crime takes a back seat to the retelling of the history of the lives of the two main characters. It's always there in the background, the reason the story is being told, and yes I wanted to know what had happened to the two girls. But I was much more interested in the human story being recounted and I'm sure this is why this book worked so well for me. I'm not surprised Pat, my husband, and youngest daughter liked the book so much. It was clever, humorous, informative, absorbing, heart-breaking. Loved it to bits and am sure it will make my top ten for this year.

Sounds really interesting Cath! I will see if I can get a hold of a copy!

I got this book from Pixel of Ink over a year ago because I loved the title. Guess it's time to read it.

Now I have to read this! Brilliant review, Cath! You have a real way of doing it. I've just read the Charlie Parker short story in Nocturnes by John Connolly because of your review last year. It was also very good, creepy, and haunting. Now to see if I can find Crooked Letter, Crooked Letter here :-)

I absolutely loved this book! I think your like of books from the south because there is a lot of history there, and I know how you like history..but this book I just liked, history or not.

ps I thought you'd wait for RIP to read the next Flaiva book!..now you have me wanting to read it! (its resting on my shelf!)

Peggy: Mine was a library book, so you could try your library if you're a member.

Booklogged: Well, I can certainly recommend it as a very good read.

Susan: Yes! You do have to read it! LOL. Oooh, that Charlie Parker short story introduced The Collector if I remember correctly. Terrific character, very creepy. Can I encourage you to read one of the novels for RIP? :-)

Chris: If Pat sent you her copy then you have no excuses! LOL!!

Pat: You're probably right about the history aspect. And I've also discovered that I specifically like reading about The South's history. Funny how when you say 'The South' people always know you mean the southern United States, not the south here in England or South Australia or whatever. lol

You know, I brought the new Flavia home from the library last week. I looked at the title and thought, 'Oh heck I should read this for RIP'. Ahem. I've already finished it. I'd better say nothing if you're keeping yours for RIP... but er... I think you'll like it.

lol go ahead and review Flavia! lol that never stops me from reading a book ! quite often the spoilers are what makes me read the book all the sooner! lol

I have thought back over the books I have read and quite honestly can only come up with one or two which were set in 'The South', so this looks like a great opportunity to remedy that.

We have visited Florida and gone over the border into Georgia many times and I can vouch from firsthand observations, that racial tensions and race issues, are still very much alive and present (notwithstanding recent news reports about the shooting in Florida)

I have read a couple of books recently about race issues amongst a countries ethnic groups, however these have centred around Eastern European countries and Australia, so I am guessing that what is highlighted in all these individual and disparate stories, is in fact a common theme, prevelant and relevant all over the modern world.

This was a great review, which really sold me on the premise of the book and the poignant writing of the author.

Very interesting comments on this book. I have a different reaction to some Southern literature, because I grew up in the South. I had a hard time reading and enjoying To Kill a Mockingbird, which just made me feel like I was a child in the South again. A wonderful book but disturbing to me.

I do want to read this book but not rushing to do it for the same reason.

Pat: I'll probably do the new Flavia book in a 2 or 3 book post, hopefully later this week or early next week.

Yvonne: It must have been fascinating, not only to go to Florida (we've never been but plan to within the next few years), but to cross the border into Georgia. We came close when we crossed Tennessee a few years ago and I wish we'd done it now. The border can't have been much more than 20 miles away. It seems amazing that these issues still exist but I'm sure you're right.

It seems the human race still has a long way to go where race issues are concerned, not just race but issues of sexuality, gender and age. It's a sad sad shame we can't all accept each, other for what we are and treat others with respect.

I'm glad you enjoyed the review.

TracyK: I completely understand why you might feel reluctant to read this one having been brought up down there. I've seen the movie of To Kill a Mockingbird but, shamefully, have not read the book. I will put that right as it's pointless reading about the US if I don't read that iconic book.

I've not read this one but it sounds really good. Great review! :)