I haven't reviewed anything in a while so today we have three short reviews in one post.

First up is Shards of Honour by Lois McMaster Bujold. 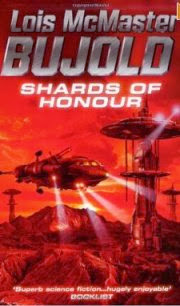 Captain Cordelia Naismith is exploring a new planet for the Betan Astronomical Society when her ship is attacked by Barrayarans. The race is a warlike one whose ethics revolve around honour and battle. Cordelia finds herself stranded with the leader of the Barrayarans, Captain Aral Vorkosigan, and has to make her way to a supply cache with him and an injured colleague. It's a struggle lasting days and when it's over Cordelia and Aral are much closer than she would have expected. She's dismayed therefore to be treated as a prisoner when they arrive at their destination and thence on one of the Barrayaran ships. But things are not as they seem, there is clearly politics and scheming involved, and Cordelia has no idea whether Aral and herself are on opposite sides in the ensuing war, or the same.

This is the second book by Lois McMaster Bujold that I've read recently, the first being The Warrior's Apprentice which is the first book about Miles Vorkosigan, Cordelia and Aral's son. Shards of Honour tells the story of how his parents met and is continued in Barrayar. This was altogether an excellent read. Cordelia is the sort of strong, resourceful female character I like to read about... every bit Aral Vorkosigan's equal and complementing him well with her more thoughtful approach to problems. There're quite a few plot twists, as the book progresses you can never quite guess what's going to happen and that for me was the joy of the book. I plan to read Barrayar next as I believe this deals with the problems of Miles's birth, plus the aftermath of a huge plot twist at the end of Shards of Honour. The series is about 16 books long and I'm hoping to get through quite a few of those this year.

Shards of Honour is my 5th. book for Carl's Sci-Fi Experience and my 3rd. book for Bev's 2014 Mount TBR Challenge.

Next, Darke by Angie Sage. 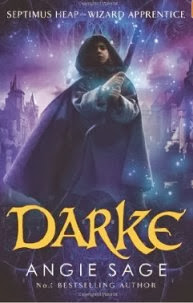 There's something strange, a dark presence, in the palace attic and Jenna, the princess in waiting, thinks it needs looking at. She approaches her friend, Septimus Heap, the Extraordinary Wizard's Apprentice, hoping he will look into it. But Septimus is about to enter Darke Week, a dangerous stage in his apprenticeship and, preoccupied, he dismisses Jenna's fears as unfounded. She's annoyed. They're both to be 14 soon and it seems to her that their former friendship is wearing thin - they're drifting apart. Unfortunately for Septimus, Jenna is right, there is something dangerous in the attic and before long it causes a Darke Domaine to swallow the whole castle. For the time being the Wizard's Tower is protected by magic but it won't hold forever. It's up to Septimus, his friends and family to do something to stop the entire magical world from being consumed. The answer is for Septimus to undertake one of his most dangerous missions ever.

This is my grand-daughter's book, she's a big fan of the Septimus Heap books and owns them all. I've been borrowing them from her over the last few years and have read them all except the last two, books 6 and 7. I find it odd that this excellent series by Angie Sage doesn't get more publicity than it does. It's a terrific series, has a lot of imagination, a lot of humour, a lot of 'soul', and a really convincing world has been created. The early books are aimed at readers of around 9 to 12 but these later books, because Septimus and Jenna are now older, are longer with more depth and can be enjoyed by anyone. I thought this one was terrific and am sorry I now only have one book left to read. Of course the answer is to go back and read them all again and that idea appeals a lot. In the meantime, if you have kids and they like YA fantasy and haven't tried this series... well a treat is being well and truly missed. 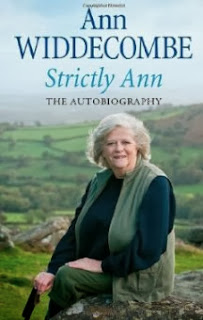 Ann Widdecombe is well known in the UK as a former Conservative MP and Cabinet Minister, though these days she's probably just as well known for being a contestant on Strictly Come Dancing in 2010. Her autobiography charts her early childhood - as the daughter of a high-ranking naval officer she spent several years in Singapore, then back to England to be convent educated, though the family were not Roman Catholic. She then went on to Birmingham university and subsequently Oxford where she was active in political debating circles etc . All Ann ever wanted to do was be an MP but it doesn't happen overnight and she spent many years working at normal jobs before eventually getting nominations to be various constituent's conservative candidates, eventually winning Maidstone in Kent in 1987.

I enjoyed much of this book but found it dragging slightly from time to time. Her childhood was interesting, unlike many you read about it was happy and unblighted by anything nasty. I enjoyed descriptions of her life in Singapore and of her school-life in the convent. Where it dragged a bit was in the amount of politcal detail. I knew it would be there because, after all, if you're going to read a book about a political animal that's what you're going to get! So it was fine and much of time also quite revealing. Things are never as they seem and Ann often gives famous events a different slant, which makes you realise that reporting in newspapers and on TV often gives the reader or viewer an entirely wrong impression about what is going on. A little alarming sometimes. I don't always agree with her opinions (she was anti female priests for instance) but I like her forthrightness in expressing them. My favourite chapter, shallow as I am, is the last one where she tells of her experiences on Strictly Come Dancing. She clearly had huge fun and gave a lot of people a lot of pleasure. All in all, not a bad autobiography at all.

Barrayar was really good! I just finished it a couple weeks ago. :)

I have got to read some of my Lois McMaster Bujold soon! I know I have some of the Miles series. You make it sound like so much fun. I don't know why I haven't tried them yet. I am not in a sci-fi mood right now, so I'm hoping sometimes this winter it will hit, the sci fi bug.

I will look into that fantasy series, it sounds like fun and just what my daughter would enjoy too. Thanks for the reviews, Cath!

I read Strictly Ann too - well I scan read some of it, the political bits weren't that interesting to me. I don't agree with all her opinions either. And yes, the Strictly chapter is good. A while ago she was on one of those celebrity lose weight and get fit type programmes - that was good, she's definitely a rebel and not afraid to speak her mind - I like that.

You're doing well with the sci-fi - I'm still dabbling round the edges with my ancient sci-fi books, just thinking of reading one first published in 1958, The Joyous Invasion, which looks interesting.

Kelly: So pleased to hear that. I think I liked Shards better than the first Miles book.

Susan: I think you will enjoy Bujold once you get to her. I hope the sci-fi bug hits you soon, but OUaT is fast approaching so maybe after that? LOL.

The Septimus Heap stories are a real joy. :-)

Margaret: I think I should have scan read some of it too instead of ploughing through every word. It's very refreshing these days to have politicians who speak their mind even if you think they're talking rubbhish. Of course she's now retired and there are few in parliament like her these days.

Yes, I'm pleased with my reading for Carl's Sci-Fi Experience this year. Five books is better than I expected *and* they were all mine. I rather like the ancient sci-fis, to be honest and look forward to hearing about the one you're thinking of starting.

so strange about the Septimus Heap books... I read the first 5 quite some time ago and I guess because it took long for the next book I lost interest but they were enjoyable up until then.. it's been so very long I don't know that I'd remember enough just to begin with the last 2 or not..hmmmm...

Pat: I think you would pick the gist of them up very quickly. I had quite a long gap between some of the books and it all clicked quite soon into the next ones.