I seem to be doing quite well with Carl's Once Upon a Time IX challenge so far. I didn't think I was in the mood for fantasy but perhaps I was wrong as Seraphina by Rachel Hartman is my book 4 for it and the challenge still has quite a long way to go. 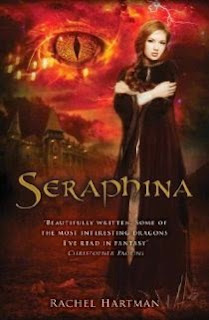 Seraphina is a court musician and an important one as she is deputy to the court composer, Viridius, and handles much of the teaching of the younger musicians. Music is in her blood but to a certain extent she has to hide some of her vast talent because she has a huge secret. Her father of course knows that secret and is insistent that she keep a low profile. Easier said than done when Seraphina is in charge of Princess Glisselda's music lessons.

The princess is the Queen's grand-daughter, the queen who made peace with the dragons some forty years ago after a long war. The peace is popular with some and not with others. Dragons have learned how to take human form and are now teachers in the university, one of them, Orma, is a mentor to Seraphina and he too knows her secret.

The peace is fragile and becomes even more so when a royal prince, Rufus, is murdered. His head has been bitten off and suspicion falls upon dragonkind as this is one of their methods of killing. Seraphina does not believe they are responsible and because Princess Glisselda always listens to her, finds herself investigating the murder along with Glisselda's fiance, Prince Lucian Kiggs, Captain of the Queen's Guards. It's a poisoned chalice sort of a task. She must at all costs keep her secret, but Lucian is an intuitive sort of person and soon realises that Seraphina is not what she seems. Lies have become a way of life for Seraphina. How she will find a murderer and still keep her secret will be one of the most difficult tasks of her young life.

You know how some books start slow and you get to about page 50 and you still don't know what all the fuss is about with regard to certain books? And then you get to around page 100 and you think, 'Ah... now I get it.' Well that's how this book was for me. I'm not even sure what kept me reading to be honest. Dragons perhaps? Seraphina herself? A hint of romance? The mystery of who killed the prince? All those things perhaps. Whatever it was I'm glad I did as I ended up enjoying it so much I gave it 5 stars on Goodreads.

Seraphina herself is a fascinating protaganist. Conflicted, full of guilt for something that wasn't her fault, dangerously ambivilent in nature, life is hard for this poor girl. I liked her determination to make a good life for herself, despite these drawbacks, and spent the entire book cheering her on. She alone makes this book worth reading.

It's quite a complicated world that Rachel Hartman has created here. Dragons and humans have one of the most uneasy truces you can imagine and as with all situations like this there is no black and white. The Humans are good and bad and so are the dragons. The conflict this creates makes for a good novel and although I'm not really a 'court intrigue' sort of a person I still enjoyed this aspect of the book. I'm also a bit of a sucker for any hint of romance and this was another instance where you had to feel very sorry for Seraphina. Hopefully that will resolve itself in future books but I actually don't mind a bit of drawn-out angsty romance.

All in all I think it was the mix of all kinds of threads and situations which eventually sucked me, hook line and sinker, into this book. I ended up loving it and am now after book 2, Shadow Scale, which came out last month.

ohhh I read this one!.. not sure why I didn't go any farther with the series other then $$ and the 130 or so books sitting on shelves here. (which of course doesn't ALWAYS stop me lol..

Believe it or not I had a difficult time with Gaudy Night..similiar to how you described Seraphina.. took a while to get into it.. but liked it.

I'm not at all sure what it was about Seraphina that grabbed me from the outset - maybe the cover helped! - but I did love it. Dragons are always a hook.

Pat, you probably didn't go any further with the series because book 2 was not available until last month. lol! My problem atm is that I want to read book 2 but, because it's just out, it's still pricey.

Geranium Cat: Dragons are definitely a hook. And I seem to be having a 'dragon' sort of Once Upon a Time this year.

I am not doing so well on the challenge, so far. I have only read one fantasy book, and haven't reviewed it yet. I hope to pick up in that area in May.

As you know, the world of fantasy is not one of my favourite genres, so although your review and the books premise and cover are very alluring, this probably isn't one for me.

About the closest I have to a fantasy book in my TBR pile right now, is a book called the 'Faerie Tree', which sounds quite tame by comparison to 'Seraphina', but is probably about as much as I can manage in the fantasy stakes!

We haven't chatted for a while, however you seem to have read quite a few fantasy books just lately. Is this a genre which is really interesting you right now, or is it just the way your review pile has worked out?

Have a good week and I hope that all is well with you.

Tracy: Well you still have over seven weeks to pick up some fantasy books so I'm sure you'll be fine.

Yvonne: Yes, I know you're not into fantasy so don't imagine this would be your kind of book.

The reason I'm reading so much fantasy is because I'm doing Carl's Once Upon a Time fantasy reading challenge. But to be honest I think I'm much more of a crime reader these days. I love vintage crime stories and like to discover newer series to try too.

All is well thanks, working hard in the garden now so not so much reading getting done. Hope all is well at your end.