The Wrath of Angels

My first book for August is The Wrath of Angels by John Connolly. It's book eleven in his well known 'Charlie Parker' series, about a private detective based in the state of Maine in the USA. 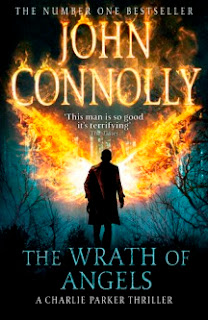 Some years ago hunting friends Harlan Vetters and Paul Scollay came across the wreckage of a plane somewhere deep in the Great North Woods of Maine. They found inside evidence that it had been carrying a prisoner and that that prisoner might have survived. No other bodies were evident. They also found money - lots of it - and a long list of names. They took the money and Harlan also took one sheet from the list of names, leaving the rest behind. Both men have now died of old age. Harlan's daughter, Marielle, comes to see private detective, Charlie Parker, along with Paul Scollay's brother, because she knows he investigates this sort of thing. Her father had told her the whole story on his death-bed. She gives him the list her father had, clearly glad to get rid of it and the knowledge she never wanted.

Charlie begins to investigate and discovers that some very odd people have also been searching for the wreckage of a plane that was never reported missing. People begin to die, among them a prominent female lawyer known to be working with Parker's enemies. He begins to wonder if his name is also on the missing list when the fact is confirmed by Epstein, a man that Charlie has worked with in his fight against the enemy they all face. Who is the beautiful woman and frightening young child who're connected to the quest for the plane and the murders? What secrets is the plane wreck hiding? And what else is loose in the Great North Woods that's scaring the locals to the point where no one will go near that area? Naturally, it's Parker's task to find some answers.

Oh, Charlie Parker, how do I love thee? Let me count the ways... LOL! Seriously though this is my absolute favourite series of all time. Such a flawed man is Parker, he's firmly on the side of right but sometimes the things he has to do make you - and people in the stories - wonder. His sidekicks, gay couple Louis and Angel, are another reason I love this series so much. Like Parker they're also ambivilent personalities, very violent, assassins if the truth be known... but they too do what they do for the right reasons. Plus they inject humour - the dialogue is sometimes laugh out loud funny - into what are often very dark doings as these books come firmly into the 'horror' genre, even though they're also very much crime yarns. Make no mistake, these books are not for the faint hearted... not fun books to read at bedtime. They're seriously scary. People die horribly!

The other thing author, John Connolly, is seriously brilliant at is creating a sense of place. He's Irish so how he ever manages to transport the reader so firmly to Maine I have no idea. In this book the sense and atmosphere of The Great North Woods is palpable. I've had a fascination for it since watching The Last of the Mohicans on TV as a teen... even though I realise they never left British soil to film the thing... the 'idea' was there and that was enough. So a book set there is right up my alley and with additional extreme creepiness thrown in, well it was nigh on perfect.

I won't go into the background to the series too much. You really need to start at the beginning as it's very much an ongoing plot that progresses with each book as you find out more about Parker and the people opposing him. It's compulsive stuff to be honest. For those who enjoy horror mixed with crime and a damn good background story I can't recommend these books highly enough. But don't read them alone on a dark and stormy night...

lol.. hmmm you're in Maine and I'm in London hmmmm lol
to me the best part is always the personalities of the characters they use. But you are so right about the author making you feel you are "right there" in the same space. (like Peter May) Glad you have a (another) series you are enjoying so much!

Not so sure this series is for me! But I'll be sure to have a look if I see the books.

I completely agree about personalities. That's makes the book, imo. I'm such an armchair traveller though that I like a foreign setting a *lot*. LOL

Margaret: It probably isn't becuase of the violence, but on the other hand I also think the background story would really intrigue you.

Oh, I might have to check this series out!

Peggy: The series is maybe not for everyone but I really love it.