I have no idea where November went. In fact, I have no idea where this whole year has gone. To be honest I find it more than a little scary. So I shall not dwell on it and move swiftly on. Books read during the month gone by numbered five, which is getting to be the average monthly total for me and I'm quite happy with that. I've enjoyed a nice relaxing reading year to be honest and plan to do exactly the same next year.

OK, on to the books:

53. The Mountains of Majipoor by Robert Silverberg

54. The Churchill Factor by Boris Johnson

56. The Murder at the Vicarage by Agatha Christie. 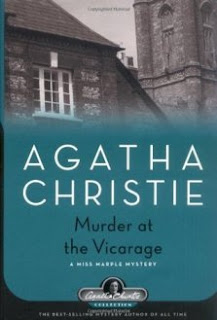 Reverand Clement, the vicar of St. Mary Mead, finds the dead body of Colonel Protheroe in his study in the vicarage. He's been shot through the head by persons unknown. The problem is that the colonel was an unpopular man and the suspects are numerous. Even the vicar was heard to say that anyone who murdered the man would be doing the world a service. Inspector Slack is brought in to solve the murder but he too is universally disliked and no one wants to talk to him. So it falls to the vicar and Miss Jane Marple to solve the puzzle of who shot Protheroe. Slack thinks it's all over when the prime suspect confesses. But is it? Miss marple is far from convinced, but if the main suspect hasn't done the deed, who has?

This was Agatha Christie's first Miss Marple story and also the first I've read. I don't know how, in all my years of reading, I've managed never to read a Miss Marple crime yarn, but there you go, it's a fact. And I really did enjoy The Murder at the Vicarage so it's a shame I've not tried them before. I thought I remembered seeing the Joan Hickson version of this and that I remembered who'd done it. Rubbish! It wasn't that person at all. LOL! I enjoyed the convoluted plot, the humour, Miss Marple's observations on the behaviour of people... I could read a whole book of those to be honest, so fascinated was I. All in all, great stuff and I plan to read more Agatha Christie next year.

Murder at the Vicarage is my book 23 for Bev's Mount TBR 2015 challenge.

So, that's my November reading. Two good non-fictions, a sci-fi that didn't really come up to scratch, and two very good vintage crime yarns. Favourite book? The Churchill Factor by Boris Johnson because it was a stonking good read and has awakened my interest in probably our most famous politician from history. Planning to read a *lot* more about him.

Churchill wanted his power back after the war so badly that even having bad health issues he wouldn't stop! Retirement was not a word he ever wanted to utter!

I don't know where this year went either - Christmas is nearly here!!!

The Churchill Factor is waiting in the library for me to collect tomorrow!

Pat: Not just me then? lol Seriously, if you see a cheap one in a thrift shop grab it as I think you would like them.

I can't get over how interesting and complicated Churchill was. And there are so many books about him. I see a new interest looming. lol

Oh now, you could be right. I may be remembering a Geraldine McEwan or Julia Mackenzie version because they *did* play around with the culprits and so on. I suspect the Joan Hickson ones were more accurate as they didn't tend to go in for making the plots more pc back then.

How lovely to have lots of Agatha Christie's to look forward to!
A neighbor who moved into the hamlet where I grew up introduced me to my first Agatha Christie ..I was... I'm guessing 12 or 13 and I was hooked :o)
I think "A Murder is Announced" is one of my favourites (It's a Miss M) but I certainly enjoyed Murder at the Vicarage.
I think I'll reread "The Sittaford Mystery" this month as it's delightfully snowy story. I've just reread The Adventure of the Christmas Pudding (short stories) which is a fun one (both these are HP) I'd recommend.

I also like very much "A Murder is Announced"! It is full of such unexpected twist I could not stand the temptation to read the book to the very end in one evening! She is also unsurpassed at different genres!!! We here essay4money.com are totally addicted of her novels!

Val: Yes, although I have managed to get around to a few over the last couple of years, I still have *loads* left.

I'll keep an eye out for Murder is Announced. I loved The Sittaford Mystery when I read it last year! Partly for the Dartmoor setting but also for the lovely twist at the end. And yes... wonderfully snowy. Thanks for all the recs. Much appreciated.

BellBeast: I'll definitely look out A Murder is Announced. Have you read her non-fiction? I really enjoyed her autobiography and Come, Tell Me How You Live.

I'll check out your link later. Thankyou for popping in to comment. :-)