Several years ago I read the very first Kate Shugak novel by Dana Stabenow, A Cold Day for Murder. I'll be honest, I was a bit underwhelmed and wondered why the series was so popular. I didn't dislike it, but neither did I love it to bits. But things change. My son-in-law has been working his way through the series and his enthusiasm has made me think about the series again, so that when I saw book two, A Fatal Thaw, in the library last week, I grabbed it to see if I might be a bit more impressed this time around. 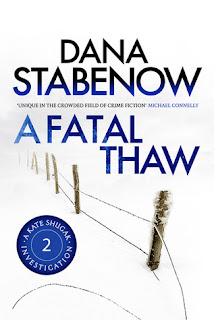 Spring is just beginning in Alaska, the thaw has started, and Kate Shugak is spring-cleaning after the long winter. Twenty miles away a mass murderer sets out on a killing spree and by the time he has finished nine people lie, shot dead, in the snow. His insanity, for that's what it is, shocks the entire local population but more shocks are to come. Ballistics reveal that one of the dead, Lisa Getty, was killed by a bullet that was different to the rest. The mass murderer did not kill Lisa, someone else did.

Having narrowly escaped being killed by the killer herself and being the one to eventually capture him, Kate feels this personally. She's a resident of the state park and thus the perfect person to investigate Lisa's murder, albeit rather reluctantly.

The big problem is that rather a lot of people had reason to do away with Lisa. She had slept with so many married or attached men that most of the women in the park are not at all upset about her death. It also turns out that Lisa was involved in some shady dealings and may have been killed in connection with those. It's a can of worms. When someone tries to kill Kate herself, and another body turns up, things turn even more ugly and it's a race against time to bring the culprit to justice or he/she could well escape forever.

Well, well, who'd have thought that my thinking on this series would have undergone such a radical transformation. I'd didn't dislike the first book at all, I was just a bit 'meh' about it, as Americans would say. But this was a different matter entirely, a truly excellent read. In truth, I whizzed through it, quite unable to put it down.

Of course it did no harm at all that it was set in the state of Alaska. I'm so fascinated by that place that I'll watch any documentary about it (Ben Fogle was there a few weeks back) or read anything set there. And Alaska is so beautifully portrayed in this book... unsurprisingly as I believe the author is from the state. A long scene towards the end appealed greatly to my love of mountains too and I thought that bit in particular was very well written and put over. It certainly thrilled my mountain-loving little heart. To be honest the whole book was beautifully written. This quote particularly struck me:

There is nothing tentative or uncertain about the coming of spring in the Arctic; it does not creep in unannounced. It marches in at the head of an invading army, all flags flying, brass band playing, soldiers at present arms and knee-deep in ticker tape and cheers.

I also the enjoyed the murder mystery aspect of the story. I had some idea of who had done the deed but wasn't sure. There were quite a few different characters who could've done it, all quirky and so well described that I found most of them easy to picture. Kate herself is an excellent main 'detective' character. Her Indian heritage makes for some fascinating insights and scenes that wouldn't appear in your run of the mill detective yarn! I like the romantic aspect, which never overwhelms the plot but fits in nicely, and am wondering where that's going... nowhere obvious I suspect.

It won't take a genius to guess that I now plan to read on in this series. Book 3, Dead in the Water, is already on my library pile (along with 10 other 'must read' books) and I honestly can't wait to read it.

LOL we, so easily, get hooked! LOL... glad you enjoyed this one. at this rate you will way outdo yourself by the end of the year! lol love it when we can really enjoy a book so much we can't get enough of it!

I thought the same about A Cold Day for Murder and although I've seen A Fatal Thaw on the library shelves I haven't bothered to have a look at it, thinking it would be more of the same - but I will now.

Hi, Cath--
I rather liked A Cold Day for Murder, but like you, it did not wow me enough to pursue the second book in the series. Now, after reading your review, I definitely will read the second. I really enjoy the climate, the weather, and the landscape in her books. Thanks for the heads up,
Judith (Reader in the Wilderness)

Excellent review.
Would you recommend reading A Cold Day for a Murder first, in spite of it being just a so-so read?

I am glad that things got better with this series!

I'm so glad you decided to try the second book in the series, Cath. I think it gets better as you go along. It's been a long time since I read this one, but Kate Shugak is one of my favorite characters. And the setting is amazing, right?

OK, here's a tip - my post about Dana Stabenow will be up this Friday. I postponed it because she was attending the Left Coast Crime convention in Phoenix and happily, so was I. I hoped to get to glimpse her or listen to her on a panel. Well, I did more than that. I got to talk to her. Yes, I was a fangirl. Check in Friday to hear more. How's that for teaser? LOL

Pat: I got totally absorbed in this one. I'm the same about books set in the USA as you are about Victorian London. LOL!

Margaret: I found it quite different, which I think is very odd but there you go.

Judith: Oh... interesting that several of us had the same reaction to book one, so much so that none of us moved on with the series. I think you'll find that book two is worth picking up.

Penny: Yes, I think so... just so that you can get used to the characters. *Although* I had forgotten all of them and it made no difference.

Kelly: Yep... it's always nice when that happens.

Kay: My son-in-law said that too and it was for that reason that I picked them up again. Oh gosh yes, the setting is just fab.

Oh, brilliant. Thanks for the heads up, I'll definitely keep an eye out for that post. I saw on Facebook that Cathy had been to the Left Coast Crime con with you. Can't wait to hear all about it.