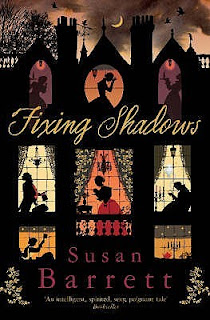 The Duchess of Fainhope has just given birth to a son but sadly the child is stillborn. Downstairs, unbeknown to all, her children's governess is doing the same thing, but her son is alive and healthy. The duchess needs an heir, her husband having recently died. If she doesn't produce an heir the estate goes to her brother-in-law's eldest son and she will be turfed out of her own home.

She goes down to Miss Mantilla, the governess, and basically demands to swap the babies for the sake of them both. Miss Mantilla agrees. A bond is formed between the two women, never to be broken. The governess won't say who her child's father is and the duchess does not press her. She's not really interested, her only desire is to pass George off as her own. And this she succeeds in doing despite the machinations of the sly doctor who is also a sexual predator. He 'ruins' the nursery maid, Lucy, who ends up in London, thus losing poor, unintelligent, George, the only person who is kind and treats him as a person.

That's basically the plot of this Victorian melodrama type of tale. It follows the lives and adventures of several groups of people... the Duchess of Fainhope, Miss Mantilla and George, Lucy in London, pregnant and alone, Miss Mantilla's two sisters and father who also live in London. These three groups of people form the basis of the story, and their tales intertwine, but many more characters enter, occupy centre-stage for a while, and then disappear off.

It's a very broad story indeed. Convoluted, full of coincidences and a tiny bit tragic in many ways. It underlines very clearly the plight of women in Victorian times, whether they were upper class and there just to provide the heir, middle-class and quite often in straightened circumstances and having to make a living governessing or being fake mediums, or just plain poor and in danger of ending up in the workhouse. It's depressing to be honest but it wasn't really a depressing book. That's why I called the book 'odd'. The author has a writing style that is hard to describe, you might call it flippant perhaps, but there's humour there and that relieves a lot of the sadness. It felt a bit like Anthony Trollope's writing... 'These sad things are happening here but it's all right, bear with me, watch and listen, and we'll see how it all works out'... very much that kind of thing.

To be honest, although I happily read to the end, the book never really properly engaged me. I don't think I was completely happy with the writing style even though I like Trollope. And perhaps another reason for my reticence is that very few of the characters were all that likeable, apart from Lucy and poor old George. That said, I suspect it was quite hard to be a nice, benevolent sort of person in the Victorian era, times being so tough and wretched for so many... if you didn't look after yourself no one else was going to, that's for sure.

So, an interesting, if not entirely successful book for me. It's been on my bookshelves for nearly ten years so it's about time it got read, thus it's my book ten for Bev's Mount TBR 2016 challenge.

ohhh!!! so I am not the only one with books on the shelves for many years!! LOL..we are SO MUCH sisters! lol lol
I am glad the book was at least enjoyable enough not to be set aside. It must be time for one that we can't put down!

It does sound different but I'll probably not bother looking out for it. And I'm another one who has books sitting on my shelves for many years - it's satisfying to read them at long last!

Pat, Nooo, nooo... This one's been there 10 years and I'm pretty sure I've had some longer than that. LOL

Yeah, it wasn't too bad and if it had been a hardback I'd probably post it on to you... it being a Victorian setting and so forth... but the print was almost too small for me, let alone you.

Margaret: It was very different but not one to rush over to Amazon to buy at all costs.

It is quite satisfying to read these oldies at long last. Makes me think I might even read another quite soon. :-D