A Life in Questions

A quickish sort of review today... mainly because, while I enjoy them very much, I always find biographical, memoir type books hard to review.

Anyway, A Life in Questions by Jeremy Paxman. 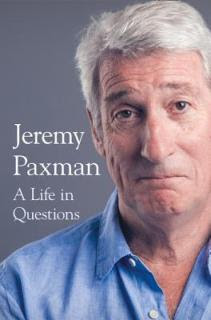 Jeremy Paxman, or 'Paxo' as he's more commonly referred to here, is a household name in the UK. Not only is he famous for his rather forthright interviewing of famous politicians but he's also the question master on University Challenge, a quiz show for students which is immensely popular. Add to that quite a few excellent TV documentary series on subjects such as the Victorians and their art, World War One, The EU, The British Empire (I can recommend all of these) and you have a long and varied career.

Firstly, the author's childhood is charted at - what he refers to - as a minor public school, Malvern College, then his years at St. Catharine's college, Cambridge and thus onto his first job at the BBC in 1972. He worked in Northern Ireland during The Troubles... in fact he was all over the world in various trouble spots such as The Middle East and The Balkans, until he finally decided enough was enough and went on to do various news presenting jobs... landing a position on Newsnight in 1989.

This book made for very interesting and entertaining reading. Paxman is hugely self-deprecating throughout, laughing at himself and admitting that much of his success is down to being in the right place at the right time. I've watched, probably, every one of his documentaries and read four or five of his highly entertaining books (I particularly recommend, On Royalty, The Political Animal and The English). So I suppose you could call me a bit of a fan. I like not only his irreverant writing style but also his irreverent attitude to the powers that be and people in high places who proclaim themselves to be better than the hoi polloi and then turn out not to be. I also like his intelligence and the fact that he's a very keen reader.

A Life in Questions is written in a very readable, but intelligent way. Paxman makes his readers laugh with his way with words and sense of humour and I'm a real sucker for that. This is, necessarily, quite an opinionated book. I don't always agree with him but he always states his case clearly and concisely and always make me think... which for me is one of the reasons I like reading this kind of thing. It's also quite fascinating to hear behind the scenes anecdotes about his experiences with some of the people he's met or worked with. Some he has a lot of respect for, others not so much. I'm still wondering who 'the news bunny' is. And Sylvia Nailvarnish...

Now of course I want to read the couple of books I have of his which I've not yet read, The Victorians and Empire both based on documentaries I've watched. I also need to get his book on World War One. Highly recommend this one to anyone interested in the lives of political journalists... I realise there probably aren't that many of us. LOL!

Glad you enjoyed the book! I am still working on De Quincey.. getting closer to the end.. it's a slow read for me as I am not the brightest bulb in the box! But finding out parts that are true from the other books is good.. sometimes I wonder how he got so famous! lol..

Thanks, Sis! :-) Looking forward to hearing about that De Quincey book when you've finished. Might have to get that. Also need to get back to that crime series he's in. Need to order book 2 from the library.

I really must get round to reading this very soon! So glad you enjoyed it. As I think I've said before we went to a talk of his a few months ago and as you would imagine he is a good and funny speaker - kept the audience laughing and clapping. I've enjoyed his documentaries too and found the one he did on the EU was really informative - not like most of the other stuff we got fed during the Referendum campaign. I can't think I'd go to a talk by any other political journalist, maybe Andrew Marr - I like him too, but most of them are just so annoying.

Margaret: His comments in the book on that EU doc. make for interesting reading. Like you I thought it was the best and most informative programme about the EU at the time. I would certainly go to see him speak, also Andrew Marr and probably Nick Robinson. Not a political editor... defense?... but I would also go and see Frank Gardner.

Cath - yes, I'd go to see both Nick Robinson and Frank Gardner speak. I think I saw a programme about Gardner - just checked and it was one of the 'Who Do You Think You Are?'family history ones.

Margaret: Frank Gardner has also been in a two part doc. this past two Sundays. He's always wanted to see a bird of paradise and went off to Papua New Guinea with a well known explorer (so well known I can't remember his name) to see if they could find one. Obviously with Frank being in a wheelchair this wasn't an easy trip. I saw him in WDYTYA? as well. He seems to be a very nice man.