As is often the case I'm a bit behind with book reviews so this is a 'catching up' post.

First up, L'Auberge by Julia Stagg 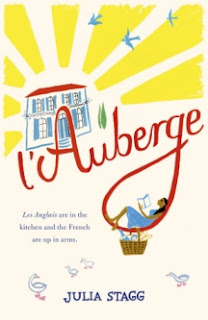 Gosh, what a hideous cover but that aside I rather enjoyed this light, fun read set in the French Pyrenees. An English couple, Lorna and Paul, have bought The Auberge (hostel, B&B type affair) in the mountain village of Fogas. The local mayor rather wanted his brother-in-law to have it and sets about making life very awkward for the couple in the hope that the business will fail and they'll have to sell it cheaply. All kinds of shenanigans ensue but along the way certain of the French villagers decide they don't like The Mayor's rum doings and set out to thwart him by helping the English couple out. Very nice sense of place in this one, nice descriptions of mountainous scenery and wintery conditions. My late sister-in-law lived in France for a while and also ran a B&B so this was quite familiar territory to me. I was quite aware of how much power French mayors wield, although hopefully most are not as corrupt as the one in this book. This is a series of five books, I'm not sure if I'll read any more, possibly if I happen to see any more in the library, but not otherwise.


Next, The Cloud Roads by Martha Wells. 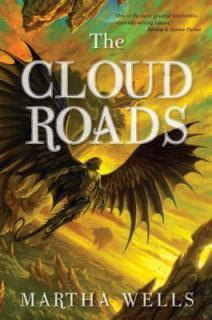 Moon has no idea what he is... he only knows that he can shape-shift at will into a winged, flying creature. As far as he is aware there is nothing else like him anywhere, his small family having been killed by The Fell, another race of flying beings - but vicious - when he was a small child. He has been nomadic since this happened, living for spells with groundlings, here and there throughout The Three Worlds, but they always find out about his shape-shifting eventually and banish him from their commmunities. Then one day, expelled from yet another village, Moon is astonished to encounter Stone, an individual exactly like himself, albeit much, much older. Stone explains a little about what he is and offers him sanctuary at his colony some way away. Used to being independent, Moon is reluctant but decides to go with Stone for the duration, having nowhere else to go. It's probably just as well that he has no idea of the challenges ahead and how much danger his life, and that of his new friends, will be in.

I've owned this for four years now, always meaning to get around to it but never actually managing to. I'm so glad I made the effort at last as it really was an excellent fantasy read... well written, amazing world-building and interesting characters. Martha Wells has packed this book full of beautifully imagined beings, especially the Raksura, of which race Moon is a member. The Fell, who seem to be trying to take over the world, are vicious and frightening... genuinely scary. I loved the travelling element, naturally, and I think this continues through the next books of which there are five altogether. Delighted and plan to read all of them as and when I can. Thrilled with this new to me fantasy series. This is my book 7 for Bev's Mount TBR 2017.


Lastly, On the Shores of the Mediterranean by Eric newby. 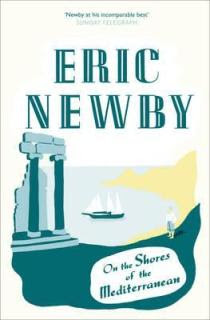 Oh, how I wish I'd enjoyed this as much as I hoped to. I quite like Eric Newby's travel writing and this book about his trip to most of the countries surrounding The Mediterranean sea, with his wife, Wanda, should have been right up my street. And parts of it were. Where he concentrated on what they got up to it was fine, although I don't think I really needed quite so many names of streets in Naples. Where I got bogged down was in the history. Which is very odd because I like history, really like it, but it was all so dry and he didn't make any of it come alive. Carol Drinkwater's, The Olive Route, also about The Med, knocked spots off it quite frankly. A real shame, but there you go... you can't win 'em all. This was my book 8 for Bev's Mount TBR 2017.

I read The Cloud Roads and I think book two, but never did get to book 3. I will have to refresh my memory and read on because I did enjoy what I read.

Nice informative reviews ..Thanks!
Question do you think should I consider the Cloud Roads for the teenage daughters ? What do you think? it sounds promising...

It's odd isn't it how some books are puzzlingly disappointing whilst others are pleasantly surprising ...it can be quite difficult to explain why..sometimes our expectations are not met others our preconception smushed . I suppose we just sigh or occasionally celebrate and we move on. But I do understand that feeling especially the books we read rather like we would ride a promising pony..lots of encouragement and hope and we don't give up but darn it all for nought. We just have to be philosophical and better luck next time.

I had a period where I loved books about people who bought houses abroad - mainly Italy - so both the Stagg and Newby books interest me - shame that Newby's history lesson was so dry - a bit like some history lessons at school (and I love history, too).

I used to love fantasy too, but these days I've found some of them hard to get into - if you know what I mean. Glad you enjoyed Cloud Roads - it does sound as though it builds a very different world. And there is something so satisfying reading a book you've had for years and enjoying it so much!

Kelly: I will definitely read on as it has the potential to be an excellent series.

Val: Yes, I think The Cloud Roads would be ok for your teenage daughters. Nothing in it to offend as far as I remember. They are written for adults but do have a certain YA feel about them. Three YA books by Anne McCaffrey would also be good, Dragonsong, Dragonsinger and Dragondrums. My girls adored those as teens and me too even though they weren't written when I was teen so I had to read them as an adult. Of course those might lead them on to all the adult Pern books too. :-) Have they read Garth Nix's Old Kingdom books? The first three are excellent... I haven't read the rest. They go, Sabriel, Lirael & Abhorsen and feature female protagonists which always gets the thumbs up from me. My daughter brought our grand-daughter up on all these books... she's 16 now and book mad. Her favs at the moment are the the Study books by Maria Snyder and anything by Cassandra Clare. It does depend slightly on how old your girls are but I hope this helps. This is probably more of an answer than you wanted. LOL!

I think the problem is mainly our expectations when it comes to books being disappointing. You think you know an author's writing then find you don't necessarily....

I don't read half as much fantasy as I used to but still enjoy it if I can find the right books and authors. There's a *heck* of a lot of dross around these days.