I don't seem to be in the mood for long reviews of books at the moment. I'm even contemplating a blogging break for the summer, but have not definitely decided. In the meantime a couple of short reviews of crime yarns.

First up, The Sait-Fiacre Affair by Georges Simenon.

When an ominous note predicting the time and place of a death finds its way to Maigret's desk in Paris, his investigation brings him to Saint-Faicre, the place of his birth. It isn't long before a darkness descends on Maigret and the town, as the prediction becomes a brutal reality and the Inspector discovers he is not welcome in the place he once called home. (Synopsis from Goodreads.)

I've read quite a few Maigrets over the past two or three years and mostly enjoyed them. I haven't given any a two star rating on Goodreads as far as I remember but I did this one. Why? Well I found myself bored by it. I'm in the minority, there're loads of four stars on GR, which leads me to wonder what I missed. I certainly 'missed' the usual excellent French atmosphere to these books. Simenon's Maigret yarns are normally steeped in it but I got nothing. Nor did I care who did away with the countess or why... or about 'anyone' in the entire book to be frank. A shame really but I have a few more promising Maigret titles on my Nook to try (this was a library book) and will certainly do so. I recently really enjoyed ITV's adaption of one of the books, Night at the Crossroads, with Rowan Atkinson. I wasn't sure at first but his portrayal is growing on me quite nicely. Hope they make more.

Chief of Police in the town of St. Denis in the Perigord region of SW France is Captain Bruno Courréges. An ex-military man he has settled in the area and is very content with his life... he has good friends, a nice house, good food, good wine. There is little crime in the area, one of the main preoccupations is to try and stop EU inspectors from swooping on the local markets and enforcing their hygiene rules. Bruno is complicit in these shenanigans. Then the rural idyll is shattered when the body of a very elderly North African man is discovered. He's head of a family of immigrants who have settled in the area. Many forces come into play. The body was marked with a swastika so is this the work of Le Front National? A young man is arrested but Bruno is convinced there's more to it than meets the eye. The old man was a veteran of several wars so could there be a connection there?

I thought I would absolutely love this and there were elements I enjoyed, for instance I thought the town itself and its surroundings sounded lovely. I liked the quirky people and it seemed to me the author had got French quirkiness spot on, from what I remember from when my late sister-in-law lived in France... not all that far from this region funnily enough. And there was a good mix of characters even including some interesting Brits. Rather surprisingly I think it was Bruno himself I was was a bit 'bleugh' about. And I think it was because he seemed a bit too good to be true, to the point of blandness. I kept thinking that the author had written Bruno, not a as a 'real person', but specifically to appeal to women. The author's idea of what women want in a man. But what's wrong with that? I honestly don't know but it just didn't feel right to me. Comparing him to Martin O'Brien's Daniel Jacquot there's absolutely no contest. Jacquot feels real (and no less attractive) whereas Bruno, for me, does not. I have a feeling this is just me. Goodreads has many positive reviews and I did give it three stars as I didn't *not* enjoy it, I'm just fairly certain I won't seek out out any more in the series. Which is a shame, but there you go.

I've liked quite a few books in the Bruno series. Funny, I haven't thought of him as 'perfect.' I wonder if you might like him better if you try another couple books in the series. I feel like I haven't written a good book report since the grandchildren came along! And I don't even do monthly short ones. I walk around with blog entries in my head but just don't have the time or energy to sit down and write them. It will all change (too) soon when they are older, but for now my blog is about easier things to jot down in a blog entry.

I haven't read this Maigret book, but it is sitting on the shelves waiting to be read. It's odd isn't it how some readers rave about books that others find boring - I wonder what my reaction will be? It's disappointing when books aren't as good as you think they're going to be. I haven't read any of the Bruno books so can't comment, except that it seems opinion is divided about them too.

I know what you mean about a summer blogging break - there are just so many other things to do that 'get in the way' and I sometimes wonder why I carry on when I enjoy the reading more than writing reviews. I've stopped doing the monthly round up type posts and I think that I'll not attempt detailed reviews but just make a few notes instead.

I am not in the mood to blog period, but trying to at least visit!! Hi! lol

Nan: I suspect you might be right, that if I read more in the Bruno series I might like him better. I'll keep an eye out for more as I do like the particular French setting.

Grandchildren do hold things up somewhat. LOL But that's ok, they're only little once and there to be enjoyed.

Margaret: Yes, it is odd that some rave about a book that others find boring. This one possibly suffered from me comparing it to a couple of other very good French detective series and was found wanting. I also fancy that people say the very early Maigrets are the best.

I'm with you on enjoying the reading more than the blogging. The mental exercise of getting my thoughts down is good but I do find it harder to do in the summer than the winter. I've stopped the monthly round-ups too, for the moment anyway.

Kelly: Hello! Nice to see you here. :-) And I can totally understand not being in the mood to blog. 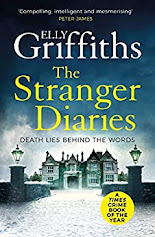