A quick catching up post today, two books to review... I was going to say, 'very different' but there is actually a connection: both books take place in the 1930s (the first one goes on into the 1940s too of course) and very much reflect those very difficult times.

First up, Gardens of Stone: My Boyhood in the French Resistance by Stephen Grady and Michael Wright. 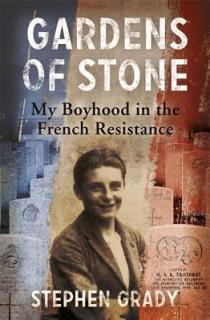 Stephen Grady was born in 1925 in Northern France, very close to the Belgian border. His father was English, his mother French - they had met during the First World War. Mother and father, four children, grandma and an aunt all lived together in a two bedroomed house in the village of Nieppe. Stephen's father worked for the Imperial War Graves Commission tending several WW1 cemetaries in the area. Stephen is 13 when war breaks out... the evacuation of Dunkirk affects the family badly and when the Germans invade France Stephen's father, being English, has to go into hiding. Stephen is rather adventurous and wild and because of a prank with another boy ends up in the notorious Loos prison, sharing a cell with three adults. Surviving this he joins the Resistance in 1941 and begins a very dangerous existance of secrets and sabotage which sets him apart from his family.

When I started reading about France three months ago I didn't think that my reading would lead me to books about the French Resistance. I got here via a couple of crime books, but principally Jacquot and the Angel by Martin O'Brien which dealt quite a lot with the French Resistance in the south of France during World War Two. It piqued my interest. I saw mention of Gardens of Stone on Goodreads and decided to order it from Amazon. So glad I did. I usually take longer to read non-fiction and thought this would be no different. Wrong. I whizzed through it, partly because the writing was so accessible (author, Michael Wright, actually wrote the book I believe) but also it really was absolutely fascinating. I'm not really a war story sort of a person but this gripped me from the start and didn't let go. The author recounts his wartime experiences in a very matter of fact way, given he was only a teenager at the time, the triumphs, the tragedies, the fear, it's all there. Some of it makes for difficult reading, betrayal to the Germans by neighbours was rife, but also it was incredibly uplifting to read what very ordinary people were capable on in the way of bravery. Stephen's resistance 'job' was to test allied airmen stranded in France to make sure they were not German spies, because English was his first language. But he also took part in sabotage missions, doing things that no young person should ever have to do. One particular event scarred him for life. An amazing book, one I would wholeheartedly recommend to anyone with an interest in the history of the second world war.

Lastly, The 12.30 From Croydon by Freeman Wills Crofts. 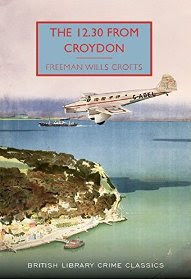 It's the late 1930s and Britain is right in the middle of what people are calling The Slump. It's affecting all, but particularly businesses. Charles Swinburn has taken over his engineering business from a rich uncle who built it up from scratch along with Charles's father. Lack of orders, partly caused by him not obtaining up to date machines for the factory, has put the business into dire financial straits and Charles needs to find some money - fast. He goes the usual routes, banks and so forth with no luck. The last resort is to apply to his uncle, but Uncle Andrew is an unpleasant individual with a cruel streak whose ill health makes him even crabbier. He gives Charles some money but it's not enough and Charles needs a better plan; which is when he decides to murder his rich uncle...

So here we have a murder mystery written, not from the point of view of the police officers who investigate the murder, but from the viewpoint of the man who does the deed. I don't think I've read one like this before, it was absolutely fascinating. We get the whole plan from start to finish and it's very strange because although Charles is really not a very likeable person you do find yourself 'almost' hoping he gets away with it. Note that I'm not saying whether or not he does... The tendancy is to think Charles is every bit as clever as he thinks he is, forgetting all the other crime books you've read where the police are not as stupid as the perpetrator assumes. Very clever stuff and I enjoyed this one very much. My only misgiving is a personal one, I don't care for court room dramas and for the last 100 pgs or so that's what this book becomes, so it lost a bit of its interest then for me. *But* another cracking BLCC book... which I highly recommend to lovers of Vintage Crime.

It's so strange how one book peaks your interest and leads to others about the same topic/ place etc. I am 3/4ths through a Susan Hill Mystery..

I must write a post on my Summer reading as I actually did some!
Love your reviews both these books sound good, the first especially catches my interest. Have you read Nancy Wake by Russell Braddon ? She was a member of SOE in France during WW2 and it is a riveting story.
I have just finished Dunkirk by Walter Lord..another really interesting read. I looked it out on belatedly realising that my Dad was almost certainly there.

Val: Yes! to a summer eading post from you.

Honestly, if we were neighbours I would foist Gardens of Stone onto you without a second thought. It is *so* excellent and readable. Oddly enough I've come across mention of Nancy Wake on Goodreads while investigating French war books. I shall add it to my WW2 list on there in a mo. Are you on Goodreads by the way? I'll also look into Dunkirk. There's such a wealth of literature on this subject.

Pat: I'm finding that this summer, more than normal one book is leading me to another and then another. Love it when that happens.

It sounds as though Val has mentioned another couple of books to add to your natural progression reading schedule. I wonder if you were to carry on linking books in this way, where it would eventually lead? - An interesting and intriguing notion!

Me, I'll stick to the crime / mystery side of the reading equation. So many of you have mentioned the 'British Library Crime Classics' just recently, that I am determined to collect these as a series. I can appreciate and enjoy both modern crime writing styles, alongside the slightly more formulaic style and staid use of language of the classics.

Thanks for a great couple of features and I hope that August's reading continues to throw up some new reading challenges for you :)

Yvonne: One year I might just do that... go from one book to another by allowing myself to be lead by various links in the books. I used to do it quite a lot years ago.

The BLCC series of books are excellent. I feel sure you would enjoy some of them at least... they do vary a little.

Thankyou, so far August has been yet another interesting reading month. Just reading my first Wexford book by Ruth Rendall... excellent.