I see I haven't posted since the beginning of the month, that's because I'm jigsaw puzzling again and when that happens my reading gets slower. Anyway, two crime titles today, two very different books but both top-notch writing and enjoyable.

First up, Sleep No More by P.D. James which is, I believe, the last anthology of crime stories the author wrote. There are six stories in this volume.

1. The Yo-yo. An old man finds a red yo-yo in a box of things which need sorting out. He remembers the Christmas it came into his possession when, as a young boy, he was driven to his grandmother's home instead of taking the train as per usual. In the car, one of his teachers, a man despised by all the boys at the private school. Something happens on the way there... An excellent story this, P.D. James gets nicely into the head of a boy with a strong sense of his own superiority.

2. The Victim. An assistant librarian marries an extremely pretty shopgirl. Before long she gets a new job, falls for her boss and leaves him. The librarian sets out to get revenge. Nicely told story with a good twist at the end.

3. The Murder of Santa Claus. Another schoolboy story with a Christmas theme. The boy concerned, Charlie, is sixteen this time and sent to spend Christmas with a step-uncle. Various people are present, strangers, so he's not comfortable at all and his uncle's oddness adds to the boy's unease. It seems the uncle like to dress up as Santa and visit his guest's rooms at one in the morning. But more than one person is abroad in the dead of night and when the uncle is found dead the next morning there are quite a few suspects... Another good story with quite a creepy atmosphere. I liked the 'anyone could have done this' aspect and had no idea who'd done it until the end.

4. The Girl Who Loved Graveyards. A ten year old girl is taken to live with her aunt and uncle after some kind of trauma but she seems to have blanked it from her mind so the reader has no idea what it is. Next to the house is a graveyard and the girl becomes obsessed with it. As she grows up she also becomes obsessed with finding her father's grave and sets about this task when her aunt and uncle emigrate to Australia. I think this was the best story in the book. It's nicely written and recounted, beautiful detail and a nice twist at the end.

5. A Very Desirable Residence. Harold Vinsom is on trial for attempting to murder his wife, Emily. The narrator of the story is a fellow teacher who is one of the few friends the married couple have. He observes that he hadn't known them very long before he realised that Harold was a sadist, subjecting his timid wife to constant verbal and mental abuse. So it came as no surprise when he learnt of the attempt on her life by her husband. Nice twisted little story this, very good observations of a marriage turned sour.

6. Mr. Millcroft's Birthday. A brother and sister, Rodney and Mildred Millcroft, are driving down to spend some time with their father on his birthday. He lives in a retirement home but is not happy there - he wants to move to another, more luxurious and relaxed place. There's plenty of money, he's given his fortune to these children, but they're being mean and keeping him in the cheaper, more regimented, place. During a picnic lunch Mr. Millcroft suddenly announces that he killed his brother who was about to change his will, leaving the famly fortune elsewhere. But is he telling the truth? Nice vein of humour running through this story. I like the vengeful father getting his own back on his selfish adult children.

This small volume of crime based short stories is excellent. Each one is very individual, very well told, and a joy to read. The writing is absolutely superb. I liked it so much I bought another of P.D. James' Christmas short story collections, The Mistletoe Murder and other stories.


The Distant Echo by Val McDermid, my book 4 for Peggy's Read Scotland 2017 challenge. 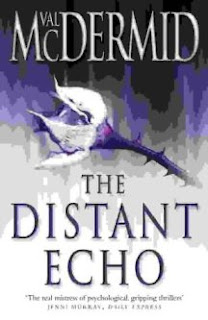 It's the late seventies and four male students from the university of St. Andrews are making their drunken way home in the early hours of the morning. One of them, Alex Gilbey, falls into an ancient Pictish burial site and discovers the body of Rosie Duff, a local girl who works in a popular bar. The boys are immediately prime suspects for the murder, but the police can find no real proof, despite the boys' movements that night being a bit suspicious. Mud sticks and twenty five years later this one accidental discovery has basically ruined their lives in one way or another. And then one of them dies in a house fire followed by another dying in suspicious circumstances. The police reopen this cold-case but Alex fears that if he doesn't surrepticiously help, then the remaining two of the original four will also die.

Margaret at Booksplease has been reading this Val McDermid series and inspired by her I thought I would try this, book one, of her 'Karen Pirie' series which are, I believe, all based on cold-cases. The surprise for me was that Karen Pirie was not in this book a lot, the centre of attention all the way through was the four boys. I'm thinking this is perhaps an introduction sort of a book and perhaps she'll feature more in future books of this series. Anyway, regardless of that, this was an excellent read. Quite complicated, quite a lot of people to keep tabs on and a lot of history of the original case to get through before it was brought up to date for the reopening of the case. I must confess here that I guessed the culprit quite early on. Of course, I didn't know if I was right so the books was not spoilt... to be honest it's so well written and so much in it that it couldn't be spoilt anyway. Possibly this book is not for everyone. The exploits of four uni students in the seventies are a bit eye-rolling and, if I'm honest, none of them were really likeable, not awful, but not terribly sympathetic characters. But I didn't mind that, I got very involved in the mystery aspect and the deatils of the investigation, and enjoyed the book very much indeed.

Some of those PD James stories sound good. To bad they are short stories. So, now you have yet "another" series?!! lol

I am having a super bad year at reading. Too much depression and anxiety I guess. I have become very lethargic. Hopefully things will change!

Both sound excellent and I’d like to read them both, Cath.

To be honest, they really do work as short stories, though one, The Girl Who Loved Graveyards would've made a fab novel.

Sorry to hear of your ongoing problems, Sis. Crossing my fingers that 2018 might be a better year for you.

Peggy: The second one has the added bonus that it's set in Scotland, so you would like that I think.

OK I have to read the PD James .....even if it means a stroll to the library in the freezing cold (-16C today) your description sent me to amazon and I read the first bit and now HAVE to know the end ...... bit pricey to buy so library it is!

The McDermid I've already read..I find her books very readable but a bit too graphic at times ...makes for a mix of feelings.

Ok off to the library I go!

I just bought Sleep No More. Thank you!!!

Val: Sorry to make you go out in the freezing cold! I feel bery guilty. ;-) Yes, best to get it at the library though as it's not a very big book.

I think this is the VMc series I will probably like. Not so sure about the other, I've heard, as you said, that they're a bit graphic but we'll see... I'm game for most things.

Did you get the P.D. James?

Nan: Well done, I hope you enjoy it as much as I did. Would make a good Christmas read.

I'm catching up reading posts as I've been away (we went to Wales with friends). I must look out for the PG James book. I don't think I've read any of her short stories! I'm glad you liked The Distant Echo, which as I've read the next two in the series I think is better than the next two! I'm still not sure I want to read any of her other books - they may be too graphic for me!

I enjoy reading anything by both of your featured authors this week, although I have only read Val's early books and have rather neglected her of late. I do know for a fact that I have your featured book on my shelf somewhere, so now I have the incentive to try and find it and add it to my current reading pile, especially as it is the first book in a new series!

P.D. James is another author whose books I can't refuse any opportunity to read. In fact I read one of her stand alone novels 'The Children Of Men' some time ago now and have just realised that the review is still sat in my Wordpress 'pending' file, so I need to get that tidied up and posted!

Thanks for sharing, I hope that hubbies knee operation is all healed now and a distant memory, so that you can look forward to some great days out in 2018 :)

Margaret: Hope Wales was as lovely as usual. The P.D. James is well worth looking out for, I have two volumes of her short stories now. I wonder why my tbr pile is not getting any smaller...

I shall read book 2 of VMcD's KP series and then see what I fancy doing. I'm not really sure I want to read her other series, but we'll see. Some authors you love all their work, others you don't.

Yvonne: They're both good authors but very different writers. This was my first Val McDermid, I shall read more, just not sure how many.

I'll have to try The Children of Men at some stage. I was a massive fan of her Adam Dalgliesh series, books and TV series, years ago. I thought Roy Marsden was wonderful in the part.

Yes thanks, Hubby's knee is almost healed. He's still using a stick a bit but that's nothing. I'm so pleased that the operation is now behind us and, as you say, we can hopefully get out and about a bit more in 2018. Which is almost upon us!