I just knew Judith's new meme, Bookshelf Travelling for Insane Times would increase my tbr pile. I like the sound of this, that she recommended:

A book of letters by Arthur Conan Doyle. I'm not buying physical books at the moment, obviously, but it's available on Kindle for £9.99. Which is not terrible but I tend not to pay much more than £5 for Kindle books so I'll think on that (and likely as not cave in sooner rather than later.)

And this I saw mention of on Tracy's blog.

Iron Lake by William Kent Krueger is book one in a crime series (she talks about book two) set in the northern woods of Minnesota. This I did buy as it was only £2.99 and who can resist such a setting?!

I really need another new crime series to start... LOL

I finished a couple of books which I haven't reviewed so I'll give them a quick mention.

Firstly, Dashing for the Post a book of letters by Patrick Leigh Fermor, this is my 3rd. book for Bev's Mount TBR read challenge, 2020

The author is of course one of the most famous travel writers of the 20th. century having walked across Europe as a young man in the late 1930s. He knew all kinds of people and kept up a prolific correspondence with all of them. People like Debo Devonshire, the youngest Mitford girl and the person responsible for bringing Chatsworth House back into the public domain. Ann Fleming who was married to Ian Fleming, the author, and was apparently a fascinating woman. Ditto Lady Diana Cooper, a famous socialite and wife of politician and diplomat, 'Duff' Cooper. Leigh Cooper liked women very much and was very attractive to them and attracted 'to' them despite being in a long term relationship with eventual wife, Joan. He also knew and wrote to authors such as John Betjeman, Lawrence Durrell and John Julius Norwich. This was a fascinating insight into the author's life, his writing, relationships and the various times he lived through.

Next, The Mapping of Love and Death by Jacqueline Winspear.

This, book six, of the Maisie Dobbs series has her dealing with the fate of a young cartographer during WW1. His parents in America knew he had probably died but his body has just been found and there is a suspicion that he was murdered before the dug-out was destroyed by a shell. They also think there was a woman in his life and they want Maisie to find her. Another excellent instalment of a series that never fails to fascinate me. Jacqueline Winspear never fails to find yet another aspect of the conflict that I hadn't really thought about and thus knew nothing about. This one is one of those 'milestone' books in the series, lot going on and a lot of surprises at the end. I've managed to secure the next two to read before lockdown started so am quite chuffed about that.

Progress on the scarf also continues apace. (Click on the photo for a much better look at it.) 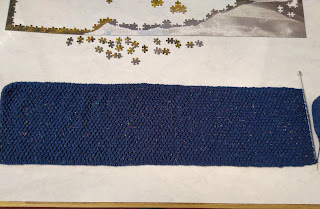 It's now 3ft in length but will probably need to be 5 or 6 by the time it's finished. Quite pleased with how it looks and am thoroughly enjoying knitting again after so many years.

I want to know how you have managed to put more hours in a day to do all that!!! Love you.

Lovely and tempting book reviews I see !
Absolutely love the scarf
wishing you and yours well xxxx

That's the dangerous thing about reading other people's book blogs: your own TBR pile grows and grows! :D

I am glad to see you found new books to pursue, and hope that you like Iron Lake. I love the yarn in your scarf. The most ambitious thing I am doing, other than reading and blogging, is weeding. Not necessarily fun, but I like the results.

Patrick Leigh Fermor knew some very interesting people. That is a fascinating way to learn some history.

I'll write a post for Judith's meme on Friday - it's a good idea. Although I don't need any more books to read - I reckon that I've already got enough to keep me going for several years :)

Cath, I think you'll like Iron Lake. It's a really well done series. Wish I could knit, but I've tried and it just made me more nervous. I used to do cross-stitch, but I don't have any materials any more and the craft store is closed. Ah well. On a happy note, I did start a new book on my Kindle today and it's going well. My reading has been very 'messed up'. Hope this is a fresh start. Take care!

Hi Cath,
I'm well into Iron Lake and am loving it! Ken has it on his Kindle as well and he'll be starting it shortly.
And I'm so glad you're enjoying your knitting. It's the perfect craft for these times, don't you think?
And I've got to get back to good ol' Maisie Dobbs.
My favorite time of day is my afternoons now. I wake early, walk the dog the requisite mileage, clean up, and then remove myself from the world with my book-reading to be followed by knitting to an audiobook. That's my most serene time of day.

Pat: I must admit it isn't easy to find time for all the things I like to do so not all of them get done every day. The jigsaw I've just finished has been on the board for several weeks for instance. *Sends a big hug*

Val: Thank you. It's many years since I've done any knitting - I've been thinking about starting again for over a year and about a month ago finally decided to do something about it. Loving it.

Nice to see you around again, Val!

Sam: To be honest these are things I normally fill my day with so not much has changed. Boredom has never been an issue for me, partly due to a childhood where I had to occupy myself as my mother had her hands full with my disabled brother. Plus, I just think I was a kid who wanted to do things and that hasn't changed.

Lark: You are *so* right. I reckon half my tbr pile is down to other bloggers! LOL

Tracy: I'm sure I will enjoy Iron Lake, it sounds exactly my thing.

Thank you re: the wool, I love the colour blue. Yes, we'll be out doing the garden soon, something do outside in these strange times.

Margaret: Lovely to hear that you're going to have a go at Judith's meme. It's a nice flexible one. Yes, finding something to read during this crisis is not a problem for the likes of us. LOL!

Kay: I think I will like Iron Lake too. And I see there are quite a few in the series when I want to read more.

I feel the same way about crochet as you feel about knitting, so I know what you mean. I used to x-stitch an awful lot and still have all my 'stash'. Who knows, perhaps I'll be taking that up again as well.

Good luck with your new book.

Judith: Yes I saw your post about Iron Lake before I realised you'd commented here. Can't wait to try it now.

Yes, I agree that knitting is the perfect craft for these times. As long as you have some wool stashed away and some needles you're fit to go.

I love spreading my various hobbies out over the day, deciding what to do next or which recorded TV programme I'll watch to knit by, is such fun. I record stuff that Peter isn't interested in, often a travel doc. or something with bones, and watch it late afternoon. I have reading hours, and jigsaw hours and so on. 'Serene' is a good word, I love the serenity of it. 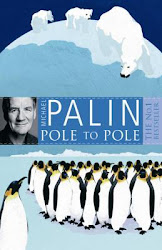