My first two books of February I haven't reviewed. This is because some months ago I decided not to try and review every single book I read, not because I haven't liked the books but really it's to do with time and a sore neck and shoulders when I spend hours typing away on the computer. So now I review books that have had a real impact on me and do 'mentions' of the others.

So today I will 'mention' Fall of a Philanderer by Carola Dunn. It's book 14 in the author's 'Daisy Dalrymple' series and is set in a seaside village in Devon. I have to say, it's absolutely one of my favourites of the entire series, probably because of the setting but also her husband, Alec, a police inspector, is in it a lot and that suits me just fine. I'll also 'mention' A Book of Frank Herbert by, of course, Frank Herbert. Not sure why this book of science fiction short stories is so oddly titled, but there you go. As with all books of short stories, some I liked and some were a bit so-so. Frank Herbert was never one of my favourite science fiction authors, unlike my husband, Dune did nothing for me at all, had no idea what all the fuss was about to be honest. But such is life, it would be boring if we all liked the same thing. This was not a bad book and one or two stories were excellent, but it's now sitting in the charity shop box ready to be donated.

So, an actual review and it's a book I saw mentioned on Pinterest of all places... I say 'of all places'... Pinterest is actually awash with bookish folk and libraries... wonderful. And the book is, Down the Nile: Alone in a Fisherman's Skiff by Rosemary Mahoney. 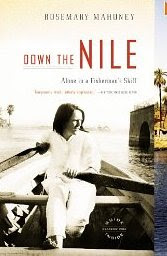 Author, Rosemary Mahoney (I think she's written a clutch of non-fiction, mainly travel books) is an American who lives in the state of Maine. She's been rowing for about 10 years I gather and took it up because she lives on a small island and needed a way to get to the mainland. She does most of her rowing in Narragansett Bay - I love trying to get my tongue around these names, I presume it's a Native American word. I Googled it as I hadn't heard of it and it seems it's the bay that surrounds Rhode Island... it looks *so* beautiful.

Anyway, the author develops a yearning to row a boat down The Nile from Aswan to the coast on The Med. This was after a normal trip to Egypt where she did the usual tourist thing with a tour boat and guides. She knows this is not going to be easy, not because it's physically difficult, she's sure it won't be, but because she'll be a woman in a country where women have no status whatsoever and no power. Buying the boat in Egypt was likely to be the hardest thing, as women never buy boats, and so it proved to be. Mahoney kicked her heals in Aswan for weeks, approaching boat owners and being laughed at and ridiculed.

What tourists normally do in Aswan is hire a felucca... 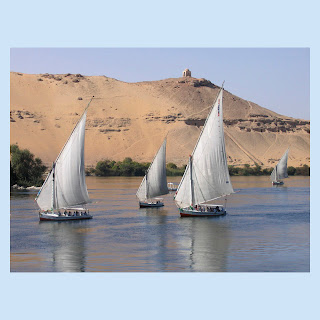 ... of which there are many, with a small crew, and see the sights that way. Luckily for her she eventually meets Amr, the only local captain of a felucca who has any sensitivity and understanding, a gentle man who treats her as an equal. She meets his family, mother and sister, and gradually gets to trust him enough to tell him what she wants to do. He suggests she find a boat and he will follow her in his felucca for part of the way, a female friend of the author, working in Cairo, also joins them and this is how Rosemary eventually sets out on her journey.

Goodness, what an eye opener this book was for me. I'll be honest, Egypt is not a country I give an awful lot of thought to... bar its history which of course is quite fascinating. This book was written in 2009, just before The Arab Spring and Hosni Mubarak was still in power. I bet the author never imagined he would be gone within a couple of years. What had happened of course was that 62 members of a tour group had been hacked to death at Luxor in 1997 and tourism had never fully recovered. This lack of recovery, for me, was the shocking thing. I suppose I knew it, but unless you read a book like this, the effect it had on thousands of inhabitants of a very poor country never really hits home. Egypt relied entirely on tourists for income and that went with the massacre and now with more troubles in the country, presumably the situation is still dire.

Mahoney describes in great detail the way the people live, the extreme poverty, how women are treated - by that I mean local women and white women. I found it profoundly disturbing. Egyptian women are basically kitchen slaves and the men have absolutely no respect for them whatsoever. The men's attitude to white women is unprintable, mind... some of the behaviour of European women who holiday in the country is also unprintable. I told you this book was an eye opener for me...

The actual rowing bit of the book is sort of secondary to the social side. Nevertheless it is interesting and there are descriptive passages which are stunning, I really 'got' Egypt and the feel of it from the book. I daresay I will never go there but at least now I have much more of an understanding of the country than I ever had before.

Another side to the book was also excellent and that's the way the author used trips by famous people from Victorian times to illustrate how the country was then and is now. Shockingly, not a lot has changed! Principally she used writings from Florence Nightingale's Letters from Egypt: A Journey on the Nile and Gustave Flaubert's Flaubert in Egypt, a Sensibilty on Tour and compares their attitudes to what they found in the country. That was amusing. Flaubert was overly emotional and sensitve and loved prostitutes, Nightingale was a very down-to-earth Victorian woman who skipped up the pyramids ahead of her guides! Winston Churchill also apparently went down the Nile, his book My African Journey is available on Amazon. I'd love to read them all to be honest.

This is a book that's so worth reading. It illustrates perfectly how you can be completely ignorant of the way a country is, read a book, and then *not* be quite so ignorant any more. I love how that can happen simply by picking up a book in the library. This will definitely be one of my non-fiction reads of the year. I simply loved it and am hoping to find more books by Rosemary Mahoney, a really terrific author.

ok, you convinced me.. i won't visit Egypt. (does the fact I never wanted to mean anything? lol)
we have been reading total opposites.. you with enslaved woman and me with Eleanor Roosevelt fighting for all sorts of rights for women and the poor! I think this is my year of biographies ..can't hurt, except for my wrists because the books are so dang big!

Pat: I don't think I've ever really wanted to go to Egypt. I think it might have been a much nicer thing to do in Victorian times, not so commercial. Reading biographies can't hurt (apart from your wrists) and I feel that way about travel writing. It's all knowledge and interesting stuff.

I've decided not to review all the books I read too, mainly because sometimes I just can't think what to write or I run out of time and am busy reading another book. I did like Frank Herbert's Dune books - as did my husband. But I didn't like the film!

Down the Nile does sound very good! I'd like to see the pyramids, otherwise Egypt doesn't appeal. But when I watched Karl Pilkington on An Idiot Abroad at the pyramids I went off that too!

Margaret: It suddenly became too much of a committment to write about everything. Also when you're reading book 14 of a series it becomes a bit silly to write about every book in the series. My husband loved the Dune books and has read every one. Why they didn't appeal to me is a mystery.

It's rather silly but I almost feel guilty for not wanting to go to Egypt now, after reading about how much the population depends on tourism. Heaven knows what they're doing now. It's so sad.

This sounds absolutely fascinating. I've always dreamed of visiting Egypt but the situation is just too unstable at the moment - I will have to make do with travel books for now!

oh wow Cath...me too with the Dune books! My brother couldn't get enough of them and I couldn't get into reading them..but unlike Margaret I loved the movie and the later version on television also.

Sam: Yes, I too shall be making do with travel books of the area. I can't see me ever making it to the actual country.

Pat: I liked the movie a bit better. Wasn't Patrick Stewart in it or is my memory completely deceiving me...