Last week was rather busy, so over the past couple of weeks I've only read a couple of books. Both were crime books and both were new series for me. The first of those was Cold Dark House by Christopher Fowler. I'm not going to review it properly, it was a good book, possibly a trifle overlong and too much theatre detail, but it was quirky and fun. I'm just not certain that it was all I expected it to be. I'll read the other two books I own in the series but not sure if I'll read further than that. The better of the two by far was The Cold Dish by Craig Johnson. 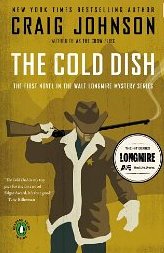 Walt Longmire has been sheriff of Absaroka county in Wyoming for 24 years. He's coming up to retirement but after losing his wife four years ago his job is all he's got. Truthfully he has yet to come to terms properly with her death, the house they were building together is still uncompleted and a bit of a wreck, he's drinking too much, and his friends and family are worried about him. Walt's dreams of retirement are shattered when the body of Cody Pritchard is found in the mountains. Cody was one of four teenage boys accused of raping a Cheyenne girl. They got off with light sentences and although Walt wonders if the death was an accident it somehow doesn't seem likely. He sets about investigating with the help of his best friend, Henry Standing Bear, a Cheyenne, and his staff who're nothing if not a varied bunch. It seems the weapon used to kill the boy was an old-fashioned Sharpe's rifle and that only a few people would be capable of making such a shot at long range. It had to be murder, so are the other three boys' lives now in danger? Walt has to find a way to protect them while being alive to the sensitivities of the local Native Americans. No easy task. And then another of the boys is found murdered...

It took me several chapters to get into this one and I was probably about halfway through before I realised that I really was enjoying it. By the end, I loved it. Why? Well it was certainly a good mystery, so that helps. I had no idea who had done the deed until close to the end which is always fun. More than that though I found the characters got under my skin. Longmire himself is an excellent main character, flawed, very human, just doing his best in difficult circumstances. His relationship with Henry Standing Bear is wonderfully poignant, full of humour, their exchanges are sometimes hilarious. Henry himself is also a fantastic character, and there are several other Native Americans who are also interesting as well as Vic, Walt's female deputy. I love the way they all try to engineer a date for Walt and the awkward way Walt feels on the date after so many years out of the dating scene. Wonderful.

The other big plus for me with this book was the setting. I had heard of The Bighorn Mountains in Wyoming of course but knew very little about them. 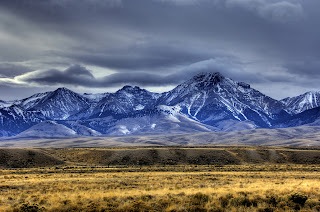 From this book I got an excellent idea of how it is to live in the shadow of these iconic mountains, the beauty, the bleakness, the isolation, the weather. One long scene has Walt having to facilitate a rescue in a snow-storm in the mountains and I'm not exaggerating when I say it's one of the best scenes of that nature I've ever read. Fantastic... both in the description but also in the spiritual aspects the author injects into the story. I'm not always that keen on that kind of thing but the way in which it was handled here was skilful and it worked wonderfully for me. It's a long time since I've read a book that had more of a sense of place than this.

To tell the truth I'm still thinking about this book and its characters and I'm having trouble starting something new. I have book 2 and have ordered 3 and 4 from Amazon but wanted to read something else before I carry on with the series. I shall be going back to Absaroka county very soon though.

I read this book as part of my What's in a Name challenge which is being hosted by Beth Fish Reads. It covers the category of 'something you would find in your kitchen'. It also qualifies very well for my own USA challenge for the state of Wyoming.

ahha! I figured it was for your "read every state" that you challenged yourself to lol.. Good to hear that you eventually loved the book..sometimes it's not easy to love a book but it always feels really good when you do!

I did awful this month ...only 2 books (about 1400 pgs) way below last month... my anxiety /stress etc got in the way oh well at least I finished this one!

I'm so glad you enjoyed your first Walt Longmire read. I love this series and it's one that both my husband and myself enjoy. You have lots of good reading ahead. :-)

Like Kay, I am *so* pleased that you enjoyed this book. I fell into it much quicker than you did. When Denis asked for book suggestions, Craig Johnson was the first one out of my mouth. Now we're both waiting for the next in the series to be published in June.

There's now a TV series based on these books. Denis and I watched, and although we liked it, it's the "decaf" version of the books. Let's face it, these are politically correct times, and Johnson's characters aren't always politically correct! :-)

I do like books that have such a strong sense of place, so I'll look out for this book. Sometimes when I've read a book that has got into my mind as much as this one has into yours, I find it very difficult to settle to another book - maybe something completely different would be OK. That's one reason I like to vary my reading :)

By the way you seem to have got a few spam comments!

Pat: Yep, I now have an entry for Wyoming... I reckon I may have a lot more for that state before I finish. lol

1400 pages is the same as about 4 normal books, so I think you actually did well!

Kay: Yes, I've now handed this one over to my husband to read too, as I think he will like it as much as I did. He's quite addicted to American crime books, one of his favs is the James Lee Burke series which I can't now remember the name of, but he loves it.

Cathy: Something clicked about 100 pages in and I knew I would be paying a visit to Amazon. LOL.

Yes, I heard about the TV series and wondered if it was any good. Often they're ok but not the same. I gather the Rizzoli and Isles TV series and books are a typical example. I like Walt's non-pcness but you're right, some people would find it unacceptable on TV. Perhaps I'll read the books first.

Margaret: I vary my reading for the same reason. Plus, I like to vary my books for the sake of this blog, it's nice to have something different to write about. I've now started a non-fiction about a chap who walked the London Underground - *overground*. And a book of horror short stories. But Wyoming is still in my head...

I have this book, ordered because I liked the sound of it but yet to read so I am very glad to hear that you liked it!
Having grown up watching Westerns, I have an abiding love for the American West (even though I have never been closer than Cape Cod) so this series is perfect for me.
I'm currently reading the first

Kate Shugak mystery set in Alaska and thoroughly enjoying it!
Can't remember if you have discovered her yet or not!

I will be looking to read Craig Johnson. This sounds so interesting and, like others have said, hold a sense of place.

Liz: I grew up watching westerns on the TV too and also have a love of the American west. I never thought, all those years ago, that it would stay with me all these years! I hope you like The Cold Dish, my husband is now reading it and is also hooked.

Yes, I did read the first KS mystery. I liked it well enough but the problem for me is that my library doesn't have any of the books (if memory serves). As the series is 20 books long almost, I have to decide whether I liked it enough to buy all of those books, and I'm not at all sure about that.

Penny: I hope you love it as much as I did.

Cold dark house and Cold dish, I think you should find something warm to read next! I have been through the Big Horn Mountains, Cath and they are gorgeous! I'm going to look for Cold Dish for my brother, I think he will like it.

Peggy: I'd not noticed that, well spotted. LOL. Not sure whether my next read was warmer or not, it was Keeping the Dead by Tess Gerritsen and was pretty scary all told.

Wonderful that you've actually been through the Big Horn Mountains. Very envious.

Like yourself, I grew up with the 'westerns' on television, although I can't recall ever reading a 'western' book.

Craig Johnson seems to be a very prolific author and one which I wouldn't mind trying, especially after your great review of 'The Cold Dish'.

This will also be a good name for me to recommend to my dad, as I can always remember that after family visits to the library on a Saturday afternoon, he would always have used his ticket allocation for detective books or westerns!

Yvonne: I don't think I've ever read a western book either and probably still wouldn't, but this crime story hit exactly the right note. My husband read it after me and liked it as much as I did, so perhaps it would appeal to your dad. I hope so as this author is not well known in the UK and that's a real shame.