In the Bleak Midwinter

Summer has arrived here in Devon, too hot for me to be honest, but others love it so I am not complaining (much). Instead I'm reading books about winter! In the Bleak Midwinter by Julia Spencer-Fleming is book one in her Clare Ferguson/Russ Van Alstyne series, set in upper New York State. 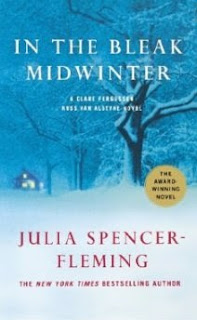 Clare Ferguson is St. Alban's new Episcopalian priest: it's quite a conservative area so she's not universally accepted. Clare is an ex-army pilot so is quite tough and not a delicate flower. A baby is left on the church steps and Clare finds it, a little boy named Cody. The unknown mother asks that the child be given to a couple who attend the church who have been wanting to adopt for years. They discover who the mother is eventually, a young student, Katie McWhorter, but before they can find her she turns up on the snowy banks of the river, dead. The case brings Clare into contact with Russ Van Alstyne, the local chief of police. He too is ex-army so they have a lot in common and immediately strike up a friendship, but Russ is married...

The case is complicated. The obvious suspect for the murder is the baby's father but who is it? There are many possibilities, her ex-boyfriend, the husband of the couple the girl wanted to have the baby, an 'unknown' new boyfriend... even her own father it seems. Clare gets very involved and Russ can't decide if this is a good thing or a bad thing. Then another body turns up and the repercussions bring Clare's own life into jeopardy in ways she could never have imagined.

Well, goodness, several people have recommended this series to me over the years. One of those cases where I've said to myself, 'Yeah, yeah... I'll get to it one day'. Now of course I wish I'd got to it a lot quicker!

For a start it has the most wonderful setting of upper New York State. We went there in 1996, stayed in a skiing lodge in the Adirondacks, headed across to Vermont and New Hampshire and then back via Albany and The Finger Lakes. It's a glorious, heart-breakingly beautiful region and this book took me back seventeen years to that particular US trip and made me want to go again. Not sure December would be the best time to go though, it sounds like a hard place to be at that time of year. Though the idea of hibernating through the winter in a log cabin in the forests and mountains with loads of books and a roaring fire does quite appeal.

I liked Clare very much indeed. She's a tough cookie who's known tragedy in her life and like many women had to adjust early to not being tradionally beautiful, so used her brains to make a life for herself. She's clearly attracted to Russ, and he to her, but she has morals and good for her. It'll be interesting to see how that pans out in subsequent books. I like Russ and I like the supporting cast, particularly the two secretaries, Harlene and Lois, who are the source of some nice humour in the book.

The mystery itself had me flummoxed most of the way through, I suppose it became clear who the culprit was when it was supposed to, so that means it worked very well. The book is well written, 'intelligently' written, which I like. There was no rushing through this, it took me several days to read and I would not describe it as a 'cozy', though it's not hard-nosed either. To be honest, for me, it was a perfect little book. After abandoning two books over the last week or so it was so nice to find a little gem to immerse myself in. I have book two on reserve from the library but that's all they have... I'm pretty sure I will be buying the rest.

glad the book was good too! lol..

I have this on my shelf already! Yaaay! and it is one I've been meaning to read. So it goes onto my ever-growing mystery pile. It does sound good, and I've heard lots of good things about this series. It's always fun when something lives up to expectation (or beyond), isn't it?

In return, can I interest you in Peter James, say, and the Roy Grace mystery series? So good that I have read two this spring, and have #4 lined up to read, and my parents have rushed out to buy several (there are 9 now in the series), they like him so much. :-D I'll be reviewing them shortly.....

It's hilarious isn't it, Pat? I'd like to see it all too. I said somewhere else (FB maybe) that the idea of hiring a camper van for a year and touring the USA and Canada really appeals. I'm reading a book right now where the author (Bruce Fogle) is doing just that, with his dog. Loving it.

Susan: It doesn't surprise me to hear that you already have this book. LOL. I love the fact that it was every bit as good as people say - you never quite know and sometimes the oddest things can put you off that don't bother others.

I went and had a look at Peter James on Fantastic Fiction last night and he does sound interesting. Look forward to your review. Nice to have you back with us, but I understand completely why you needed a break.

Have you read anything by Margaret Coel? I just got the first two books in her Wind River Reservation crime series, set in Wyoming. They sound very good.

Cath I have had this on my want to read list a long time and your review has made me decide to get to it soon! It is a lovely area as is Vermont and New Hampshire! Did you get to Mt. Washington in New Hampshire? We have done trips via motor home and camper across the states and it is fun. Hubby wants to sell house and do that permanently when he retires but I don't know about that.....

Hey! if you do this make sure that the camper will fit your sister! heh.

Peggy Ann: I was very enamoured of that whole region, mountainous and forested, my perfect landscape. No we didn't get to Mount Washington, not enough time. When we make it back there I will get some hints from you as to what to see and where to go.

My husband has also made similar suggestions about camper vans and N. America. Only half jokingly. If I had a more adventurous spirit I have a feeling we'd be off. I don't think I could be away from my daughters and grandkids that long, that's the problem.

LOL, Pat... yup I would certainly do that.

You know I am a sucker for a good murder / mystery, so this is another new author and series to add to my list, thanks to your rave review!

I see that 'Susan' also recommended Peter James books and I agree wholeheartedly with her. In the scheme of how many books he has written, I haven't read many, but they are always edge-of-the-seat stuff and I am sure you would enjoy them!

I do not enjoy this weather at all, I am strictly a spring and autumn girl!

We were down in Devon the other day, visiting 'Lydford Gorge', what a beautiful place, as is Salcombe, where we ended up afterwards.

We come down fairly often for the day, so we really should try and fix something up and get together for a coffee perhaps?

I began this series and read maybe three until the one that takes place in 24 hours. Somehow I was put off and never went back. But maybe I should!

A favorite region of the US for me, Cath, and it is beautiful in winter as well, but, Autumn is the best, best time. Now, I don't know this series/author, I am sorry to say. You have enticed me to change that, soon.

Nan: Oh, now I'm interested to read the 24 hour one, I saw it but don't remember the title or much about it.

Penny: Yes, I agree it's a stunning area. I bet Autumn is the best time... we were there in April/May. I hope you will try this author at some stage, it's well worth it.

Yvonne: I keep hearing about Peter James from all kinds of people, so yes I will definitely try him at some stage.

I hate this weather, literally hate it. My husband with his heart condition and diabetes also hates it. Can't wait for it to get cooler, like you I'm a spring and autumn person.

I haven't been to Lydford gorge in years, we really must make the effort this year as we used to love it.

A coffee if you're down this way and we're around would be super!