A reader's A to Z survey

I first spotted this meme on Susan's blog (You Can never Have Too Many Books) here. Although the meme originated at Jamie The Perpetual page Turner's blog. As I'm reading a long book and there won't be any reviews from me for a little while, I thought I'd give it a go. 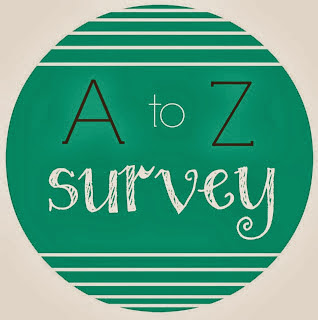 Author I've Read The Most Books From:
Hmm... I think the answer to that would have to be Terry Pratchett. I've no idea how many of his books I've read but it's almost all of them, I know. It's either him or Georgette Heyer. I know she wrote 50 or so books and again I know I've read nearly all of them, so it's a close-run thing between those two authors.

Best Sequel Ever:
Crikey, that's a tough one. And I'm not sure exactly what's meant by 'sequel'... a second book in a series or simply a sequel in a finite, two book series? Well I'm going for the 'book two in a series' option and choosing Dark Fire by C.J. Sansom. It's book two in his Matthew Shardlake series and I thought it was miles better than book one, Dissolution, and absolutely brilliant.

Currently Reading:
The Happy Isles of Oceania by Paul Theroux.

Drink of Choice While Reading:
That used to be Dr.Pepper or Coke but nowadays it's a cup of white tea.

E-Reader or Physical Book:
Both. I love real books but increasingly find small print hard to deal with. With my Kindle I can adjust the font to whatever size I want. Epic.

Fictional Character You Probably Would Have Dated in High School:
I can't think of anyone young that I read about in books at that age, to be honest. The immediate answer that springs to mind is Mr. Darcy. I was hooked from the moment I saw the 1940's Hollywood film at 16 years old. I then went on to read the book and have not stopped loving it, or the various dramatisations I've seen, since.

Glad You Gave This Book A Chance:
Harry Potter and the Philosopher's Stone.

Hidden Gem Book:
The Magic Apple Tree by Susan Hill. Non-fiction. A year in the author's life in a Cotswold village. Gorgeous.

Important Moment in Your Reading Life:
The Berlin wall came down in 1989 and suddenly I wanted to know about Mikhail Gorbachev. I went to the library and got a biography, read it and loved it. All of a sudden after quite a few years of reading very little I was back into books in a big way. At some stage I grabbed a biography of Jerome K. Jerome and in it was the retelling of a real-life ghost experience he had on the battlefields of WW1 (he was an ambulance driver for the French army). It fascinated me and I went looking for ghost stories - suddenly I was into Victorian and Edwardian ghost stories and real-life ghost books in a huge way... and all due to Mikhail Gorbachev!

Just Finished:
Turtles in Our Wake by Sandra Clayton - a travel book about sailing in The Med.

Kind of Books I Won't Read:
I'm drawing a blank here because I'll read most things. Which brings problems of its own of course, involving too much choice by far and not enough time to read everything I'd like to read!

Longest Book I've Read:
I can't think what the longest book I've 'ever' read is but the most recent has to be The Ship of Magic by Robin Hobb which was close to 900 pages. (And is brilliant by the way...)

Major Book Hangover Because:
Too many books, not enough time!

Number of Bookcases I own:
Three actual bookcases and three large stretches of wall that are covered in bookshelves.

One Book I have Read Multiple Times:
Sylvester by Georgette Heyer. Never tire of it.

Preferred Place to Read:
Either in the conservatory where the light's fantastic or in my favourite chair in the lounge.

Quote That Inspires You/Gives You All the Feels From a Book You've Read:

'Stories of imagination tend to upset those without one.' -- Terry Pratchett

Reading Regret:
When you become an adult I'm sure you don't quite feel the magic of certain books as you did when you were a child, and that's a shame.

Series You Started and Need To Finish (All the books are out in the series):
Robin Hobb's first three Liveship Trader books would do for a kick-off. There are others...

Three of Your All-Time Favourite Books:
Grass by Sheri Tepper. Down Under by Bill Bryson. Drood by Dan Simmons.

Very Excited For This Release More Than All The Others:
The Outcast Dead by Elly Griffiths, the new Ruth Galloway book, out in Feb. 2014.

Worst Bookish Habit:
The same as Susan... borrowing too many books from the library and not reading them all.

X Marks The Spot: Start at the Top Left of Your Shelf and pick the 27th Book:
Tigana by Guy Gavriel Kay. Not read.

ZZZ-Snatcher Book- Book That Kept You Up WAY Too Late:
Howard's End is on the Landing by Susan Hill. Read it twice now and planning to read again very soon.

Well that was huge fun! Anyone else care to do it?

oh wow! I may try this! a few questions seem very hard but overall this is a good meme!!

(glad Drood made the list! I see much books alike with Drood and Pern in there! lol)

Loved your answers! Sylvester's great, isn't it, I often read it in Devon because I left my copy there.

Might do this myself during the week, I'm trying to get back into the regular posting habit.

I did this, too. Which means I actually blogged! haha. Good answers, though. Fun reading. :)

Pat: Some of the questions are quite hard so I did it over a couple of days to give myself time to think about them. And was still changing stuff just before I posted. LOL.

I had to have Drood in there somewhere... it really is one of my favourite books ever and I'm certainly going to reread it at some stage.

Geranium Cat: My favourite Heyer always used to be Frederica and I still love that but Sylvester has taken over as my favourite for some reason.

I think it pays to do this over a couple of days as I reallly needed to think about some of the answers.

Imagine? Mikhail Gorbachev. I would have trouble coming up with one moment, Cath, though I know I learned to love books on my grandmother's lap. She would tell me stories, holding a book. Illiterate herself, she just made things up, but, I didn't know the difference and my fate was sealed. I've loved books since I was toddler.

I really have to read Drood, if you liked it so much, Cath! Between you and Pat.....I'm so glad you did this, I enjoyed doing it too. I like how Mikhail Gorbachev led you to ghost stories! And the sailing book in the Mediterranean you read sounds interesting.

New Elly Griffiths! I really enjoyed her latest - I thoroughly love this series - just have to review it. I own the second Peter May now too, and am afraid it won't be as good as Black House either. I'm up to book 4 of the Sansom series....I really enjoyed book 3, which is set in York, where I lived in England. I had fun imagining how the city looked then.

I love these memes when other people do them but I can never come up with answers. Although this one does seem more possible than most. Nice answers. I hope I like Terry Pratchett when I try his books.

Penny: My mother used to go to the library for my brother and I was so thrilled when she realised I needed a ticket too. I started with Noddy books by Enid Blyton (I would have been 5 or 6) and have never looked back.

Susan: Drood is so complicated and deep and kind of weird. It seems you either love it or hate it but I was just enthralled. Rarely do I enjoy a book like that or not want it to end.

Yeah, so weird about MG bringing me back into books.

I loved the latest RG too... I hadn't read one in a while and it felt like meeting up with old friends. I love Ruth.

Oh good... I shall try to read Sovereign soon then. I'm also thinking it's been a while since I visited Merrily Watkins. lol

Tracy: I have a problem thinking up answers too. For me the thing to do it compile it over a couple of days.

I really meant to comment on your post when I read it last week! But I liked it so much I decided to write one myself (as you know!).

I quite agree with your reading regret - there was a magic about reading as a child that I only rarely glimpse now, which is one reason I don't want to re-read the books I loved then - I was disappointed at my reaction to Little Women when I re-read it a while ago.

And I too take back books to the library unread - but I think that's not so bad because it keeps the library's issue numbers up and gives me the chance to look at books I'd never buy and decide whether or not I'd like them.

Margaret: So glad you decided to do this too.

It's so true that there's a special sort of magic to reading wonderful books when you're a child. I reread Minnow on the Say by Philippa Pearce a couple of years ago. It was delightful but really not the way I remembered when I was 13 or 14. I also tried rereading Little Women... sadly I didn't get beyond page 20 or so.

And you're so right about library books, which is one reason why I don't feel too terrible about not reading them all.