Goodness, is it really October already? Where has the year gone - it's scary. Certainly autumn is well and truly here (apologies to those of you who don't get autumn). I'm still picking and freezing produce, tomatoes and apples mainly, and my husband picked a load of squashes yesterday which are looking very merry drying in the greenhouse. But things are now easing off, which is lucky as our large chest freezer... which a friend has taken to calling The TARDIS... is practically full. Putting new stuff in now requires some major tactical manoeuvres on our part.

Apart from harvesting from the garden things have been rather quiet. I'm waiting on a hospital apt. to come through for an endoscopy - oh joy - and not feeling like going out galavanting much. The result of that is that I'm staying in and reading quite a lot. This month I read eight books and am very pleased with that number, in fact I think I passed last year's entire book total mid-Sept. which is something of a record for me as, speed-wise, I am only a slow to average reader.

Anyway, my books for September were:

60. The Woods by Harlen Coben. Not a bad read at all but not sure if I'll read more by the author.

61. One Man and His Bike by Mike Carter. Loved it.

62. John Silence: Psychic Investigator by Algernon Blackwood. One or two stories not as good as others but overall rather good.

65. I Shall Wear Midnight by Terry Pratchett. Completely wonderful. Excellent addition to the Tiffany Aching series.

67. Turtles in our Wake by Sandra Clayton. Nice travelogue involving sailing around The Med. Enjoyed it a lot.


As I said, a very good reading month. I liked everything I read and loved one or two books as well. Can't ask for more than that. Of the eight books read five were for Carl'sR.I.P. VIII challenge. To have five books read for that after only the first month makes me a happy bunny.

I'm also pleased that the other three books are all non-fiction. So far this year I've read seventeen non-fiction books, which is much better than normal but am hoping to make twenty to twenty five before the end of the year. We'll see.

My favourite book last month... difficult one as two were stand-outs. But I think the title has to go to a non-fiction travelogue: 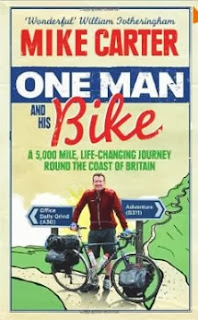 One Man and His Bike by Mike Carter. I defy anyone to read this and not want to pack their bags immediately and head off to Scotland. I will say though that a very close second to this book was I Shall Wear Midnight by Terry Pratchett.

So, I'm now over halfway through The Happy Isles of Oceania by Paul Theroux. It's good but lonnnng, and I need a break so I'm going to start something Victorian for the R.I.P. challenge. Probably The Dead Secret by Wilkie Collins. I know Pat at Here There and Everywhere will be very happy about that!

Holy Cow!! you've turned into a speed reader! lol.. that's fantastic Cath!.. but the best part is that you liked the books..

Well, I've read the Pratchett, but I'll have to see if the nice man on the mobile library can get me One Man and His Bike, as you liked it so much.

I'm being very sensible and not taking part in R.I.P. VIII because I've got loads of books I absolutely must post about, and they aren't the right kind! Missing it, but enjoying it vicariously by reading people's reviews - much will be added to my book list, no doubt.

You have had a successful month of reading, Cath, and you've given me more reads to add to my list. I'm particularly intrigued by "One Man and his Bike".

Good thoughts coming your way for the endoscopy.

I was going to say you have put me to shame but I just went and checked how many I read and it was 5 too! I feel much better now.

Pat: I think I'm a long way from being a speed reader. LOL

Geranium Cat: Good luck with getting One Man and His Bike via the mobile library.

It's a shame about RIP but sometimes you just can't do it all. Next year perhaps.

Penny: It was an extremely readable and interesting book. I believe I downloaded something similar for the USA some while back, must check that.

Thank you so much for your good thoughts about my prospective endoscopy. Much appreciated.

Peggy: 5 is an excellent total!