Two quick reviews today, both of them for Carl's R.I.P. VIII challenge, which I've suddenly realised is only a few days away from finishing. Can't believe how quickly that flew by.

Anyway, first up, Mayhem by Sarah Pinborough, which I read a couple of weeks ago so will have to try and jog my memory about the plot. I'm hopeless at remembering what books are about if I don't review them straight away. 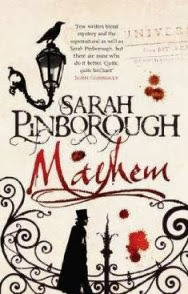 It's 1888 and Jack the Ripper's reign in Victorian London is underway. A serial killer is killing women and dumping body parts in the river Thames - Dr. Thomas Bond the police surgeon realises Jack is not the culprit and, if anything, that this is a far more deadly killer. It also seems as though the atmosphere in the city is strange - more violence in the air and in people's heads. Even Bond's own life is a mess, he's suffering insomnia and has been driven to the opium dens. One night he witnesses a strange man with a withered arm, walking among the opium users and studying them. Bond feels compelled to find out who this man is and if there is a link to the Thames Torso murders.

Interesting story this, reminding me ever so slightly of Drood by Dan Simmons, though it's not nearly as long or as complicated. Victorian London is well depicted in all its seediness and hypocrisy, warts and all, which is always fascinating to read about: I find it so anyway. The narrative jumps around a bit, which I found slightly confusing, but then I'm easily confused. I liked the supernatual element... something quite different, believe you me. Possibly the ravaged soul come opium thing was a bit over-played in Dr. Bond, but not so much that it annoyed me. In all rather a good read and I gather there's to be another book about Thomas Bond in 2015. I shall read it. 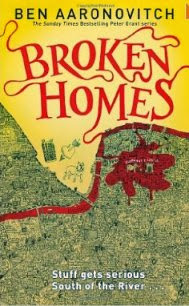 An unexplained suicide on the London Underground leads eventually to Peter Grant and his colleague Lesley moving into a flat in an iconic high-rise housing estate. It seems the designer was a German who moved here to escape the war and that he might have been a practioner of magic. Peter and Lesley need to find out if something not quite right is going on in the flats, and whether or not the designer had some ulterior motive in creating the building. The two of them and Nightingale believe The Faceless Man might be involved but the trick will be to find out 'how'.

This is now one of my favourite series. This particular one has quite a lot of police procedure in it and some might find that a bit dull. I didn't, though in other books I might. Somehow Aaronovitch makes it all very interesting, interspersing it as he does with loads of lovely little snippets of information about the city of London, or... well anything really, all subjects are covered. This is not the best of the four, plotwise, for me that would be the last book, Whispers Underground, but it comes close and has the most amazing plot-twist at the end which I didn't see coming. I feel that Aaronovitch has now hit his stride with this series, many authors take several books to do that and I feel a series is often all the better for it. I love the characters, the weirdness, the way he uses London and modern day British culture so effectively. Brilliant. Crossing my fingers and hoping for a new book next year.

Both sounds really good. I think I would really like Broken Homes!

The first one sounds pretty good. There seems to be no end of stories around or about Jack the Ripper! lol.. but so far all the ones I've read have been very good! Glad you enjoyed these!! Hope you and P are feeling better

Peggy: It's a very good series but best start at book one if you fancy reading them - Rivers of London.

Pat: LOL... yeah, another new series. Luckily the next book is a way off yet.

Yep, I think our fascination with Jack knows no bounds. Wonder if we'll ever know who he was.

Mayhem is on my reading list because of you, Cath! Bookmarked for January when it is finally out over here :-) I'll be getting it. I enjoyed your review very much.

I have the 2nd book in the Aaronovitch series still to read on my shelf. I didn't get to it in time for RIP. I did like the first, and knowing you love the series so much now makes me want to get to this series again.

Glad you enjoyed both so much, Cath!

Susan: I think you'll enjoy Mayhem and the idea behind it. I gather there's to be a new book in a couple of years and I hope she goes back to the same theme.

The Peter Grant books get better and better. I truly think BA hit his stride with Whispers Underground - book 3. My family all love the series and other online friends. I saw BA on TV a few weeks ago and loved hearing him talk about the series and Dr. Who which he has written for.