My first book for Carl's Once Upon a Time VIII challenge is Among Others by Jo Walton. 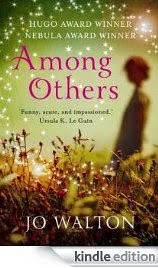 Morwenna Phelps is a 14 year old girl from The Valleys of South Wales. She's just met her father for the first time, he left the family when Morwenna and her twin sister, Morganna, were very young. Morwenna - or 'Mori' as she's known - is now an only child as her sister has died. Mori's father lives in Shropshire in a manor house with his three sisters, triplets, but it's clear from the start that they don't want Mori so she's packed off to boarding school. Of course, there's no way that a Welsh girl from The Valleys is going to have an easy time of it at a posh English boarding school and so it comes to pass. For Mori is of course 'different'. Not only is she disabled as a result of whatever happened to her sister, she can also see fairies. 'Magic' is something that really exists in Mori's world but as a young teen she has already learnt that magic is inherently dangerous. And one of the biggest dangers as far as she is concerned is her own mother. Mori's life is incredibly difficult, bullied at school, unwelcome at her father's home, as different from others as it's possible to be, the only thing Mori can find solace in is books. Science Fiction books to be exact. She wonders if her love of this genre of fiction can save her, and then thinks of a way to bring it about...

The first thing I'll say is that Mori is a delightful narrator for this book. The story is told via her diary and is thus written in first person, a form I love because it enables the reader to really get to know the narrator... *if* of course the author has the skill. I'm pleased to report that Jo Walton has the skill. In spades. Mori's personality jumps right off the page at you, she's incredibly brave; not the kind of person to bewail her fate she just gets on with life making the best of the poor hand she's been dealt. I love her Welshness, despite being thrown into an English boarding school she's fiercly loyal to her Welsh roots and her family and very upset when she realises the school has inadvertently changed her.

But of course, what I really loved the most about young Mori was her devotion to science fiction books and, to a lesser degree, fantasy. Samuel B. Delany, Robert Heinlein, Robert Silverberg, Anne McCaffrey, Ursula K. Le Guin, Tolkein, to whom she's devoted, ... way too many authors to list them all to be honest. This book is a science fiction fan's idea of heaven. Mori recounts the events that are happening in her life in a very matter-of-fact way and the books she reads form a very natural part of the telling of the story: it's quite clear they are part of the very fabric of her being. It's seamlessly done - really, really clever writing.

As with all clever stories information is fed to the reader in a slow drip-feed. How Morganna died, what the problem is with the mother, what Mori's former life in The Valleys was like and so on. We watch as she grows up, her struggles at school with other pupils, her struggle to find friends and how her life is slowly transformed towards the end of the book. Her ambiguity as regards doing magic and her dealings with the fairies is a real source of unease for her, she worries constantly about what kind of person she is. Is she good or evil? We know of course and it's quite heart-breaking to see her inward struggle to make sense of it all.

I feel incredibly lucky to have happened on Among Others as my first book for the Once Upon a Time challenge. I've had it on my Kindle for a year or so and not got around to it so now was the perfect time. The author, Jo Walton, is apparently a Welsh-Canadian, not sure which part of her nationality is prevalent but the writing just felt Welsh to me. Among Others won the 2011 Nebula award for best novel and the Hugo award in 2012 for the same. I'm not remotely surprised. I'm currently reading her new book of essays about rereading science fiction, What Makes This Book so Great. Already I know I'm going to want to own it (it's a library book) and plan to stick it on my birthday list in a few weeks time.

So that's my first book read for Once Upon a Time VIII, and Among Others also qualifies as my book 11 for Bev's Mount TBR challenge.

yes, this was a good book! I read it back whenever it was that Carl read it and raved about it. So glad you enjoyed it!

Wasn't it good, and original! I loved the exploration of books and discussions about them. I'd really like to read it again, though, because I kept getting interrupted and it would be a while each time before I got back to it, which wasn't fair on such a good book. I admire Jo Walton very much - her Tor.com posts on Name of the Wind ought to be required reading for Rothfuss fans (but not till after you've read the book!). I really want to read Tooth and Claw soon, but I can't get it from the library (much gnashing of my own teeth at that) and I keep buying books I shouldn't. Sigh :-(

It seems like everyone who reads this really loves Mori's love of books. I envy how many she gets through, so quickly!

Pat: I forgot that you had read it so I'll look for your review in a minute. Think I may have read my best book of the challenge first! lol

Geranium Cat: It was *very* good. Ah yes, that disjointed reading of books happens to me at times and it doesn't help you form a proper impression of the book.

Thanks for the tip, I'll read The Name of the Wind and then search our her post. My library has Tooth and Claw as an eBook so I could get that for my Nook. I'm really enjoying What Makes This Book so Great too - her knowledge of sci-fi books is encyclopedic.

Marveloustales: Yes, she's a lightening quick reader. I think Jo Walton herself is too.

A fascinating review, Cath. I'll look forward to this one.

I read Walton a few years ago and meant to read more but haven't managed to do so yet! It will be this one when I do!

Penny: Thank you... I'm not at all sure I did it justice to be honest but hope my love for the book came over.

Marg: I certainly plan to read more... Tooth and Claw is on my radar.

I have this one unread on my bookshelf so I was really pleased to see how much you enjoyed it, Cath. I've not read all of the sci-fi books you mention, so I'm sure that reading it will lead to reading many other books!

Cath: I'm so glad you enjoyed it so much. It was among my top 10 books last year (not that I've posted a list on my blog or anything! lol You described the book perfectly, too. She made me wish Morwenna was real and could be my friend. That takes a lot of talent and true story telling.

Now as the for the list of books and authors she talks about - it's such an impressive list, and I want to read so many of them now.

That's a great first book to read for the challenge, Cath.

How have I missed this book?? It appeals to me on so many levels - not least the Welshness (my mother was Welsh). I' really must read it.

Yes, it was the emphasis placed on books and reading that gave me the most pleasure in this one.

Susan: It will be amongst my top ten at the end of the year too. Amazing book.

I need somehow to make a list of all the books. I was hopeful that What Makes This Book so Great might have a list but I can't see one.

I see you've finished The Wood Wife, I'll go and read your post in a moment.

Margaret: I think this is a book that has managed to be very popular but also quite obscure at the same time. That's quite an accomplishment! LOL

Jenclair: Yes, the same applies to me although it had a lot of other things to recommend it too.

I have loved Jo Walton so far! Among Others was really good. :) I am glad you enjoyed it!

Kelly: I think she could easily end up being one of my favourite authors. I'm also really loving What Makes This Book so Great. :-)

I think I'm pretty much the only sci-fi fan in the world who sincerely did not like Among Others and rank it really low. Blasphemy, right? Besides the fact that the end of the book made me want to throw my eReader at the wall, I also felt like the writing style (and the method by which we grew to know Mori) was blog-like in a very bad way. I appreciated Walton's attempts to write Mori (and the ways in which Among Others really branches out), but truthfully, any time writers use the "diary" approach, a huge level of realism is lost. And I didn't feel like there really was a story. And the bit of story there was angered me incredibly.

So I'm the weird one here, I know. But I just honestly didn't like the book...

Biblibio: I'm absolutely certain you won't be the only one not liking it. In fact, I just checked Goodreads and although there are many 4 and 5 star reviews there is also a good smattering of 2s and 3s. You are not alone! LOL. I do agree with you about the lack of a proper story, but somehow it didn't bother me. Each to his own. I felt exactly the same way about The Time Traveler's Wife. Loads of people, including my husband and daughter, telling me how great the book was... and me struggling to finish it and not giving a damn what happened to Henry and Whatshername. It's what makes reading so interesting in my opinion... why some people love a book and others just don't.

I know I read your review and thought that I had commented. So here I am, back to comment. I am glad you enjoyed the book and I think I will like the same things that you did. Looking forward to reading it soon.

Tracy: I hope you enjoy it as much as I did.