My third book for the Read Scotland 2014 challenge which is being hosted by Peggy at Peggy Ann's Post is Sisters of Sinai: How Two Lady Adventurers Found the Hidden Gospels by Janet Soskice. 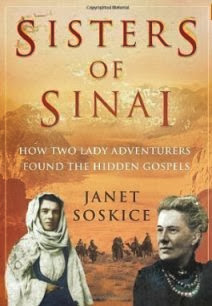 Twins, Agnes and Margaret Smith were born in Irvine, Scotland in 1843, Agnes being the older of the two by half an hour.Their parents were John and Margaret Smith, their father being a lawyer. Their mother died two weeks after their birth and John never mentioned his dead wife's name again. He concentrated instead in bringing his daughters up as God-fearing Scottish Presbyterians and, something unusual in those days, educating them to the best of his abilities. He discovered that the girls had a gift for languages and made a pact with them - that for each language they learned they would get to visit that country. Thus at quite a young age both girls spoke French, German, Spanish and Italian. When the twins were thirteen a distant relative left John Smith a huge amount of money and he became one of Scotland's richest men. The girls were sent to boarding school and then to finishing school. It was thought that like most young ladies at that time they would marry early and that would be that.

Sadly, John died in 1866. At the age of twenty three his daughters were unmarried still and very, very rich. Not to mention rather well educated. They set off on a trip down The Nile. It was to be the first of half a dozen trips to Egypt that the twins would make in their lifetime, and also rather a steep-learning curve in how to deal with the likes of the dragomans who basically controlled your trip. The one thing Agnes learnt from this trip was the necessity of speaking the language of the country you're visiting. The girls went home and learnt to speak Arabic.

On their next trip to Egypt Agnes and Margeret were heading for the Sinai desert. Mount Sinai to be exact and the ancient monastry of St. Catherines. Professor Rendal Harris, a friend of the twins, had suggested to them that an important biblical text might be hidden in a cupboard in the monastry and they were hoping to find it. And find it they did. It turned out to be palimpsest, a manuscript that has been overwritten by something less important. In this case the hidden text was one of the earliest copies of the four gospels, and might prove that the gospels had not been written, as had been suggested, 400 years after the death of Jesus, but instead much, much closer.

The twins took over 400 photographs of the pages and brought them back to Cambridge where they were now living. It took them some time to get the experts there to even look at the photos because of course they were just women so how could they know whether what they had was important? Once it was known what the manuscripts were though, a return journey was necessary with two experts in the language the manuscripts were written in: Syriac. Again Agnes was to realise the mistake of not knowing a language. The two professors tried to elbow them out of proceeedings and the expedition, though a success, soured relations within the group. Agnes's mission when she returned home again was to learn Syriac, thus being the one in charge of the sisters' exploring and academic lives and not have to rely on men whose main mission seemed to be to take the glory for themselves.

Anyone who knows me is probably wondering why I wanted to read this book. Is it ostensibly about two very religious women looking for proof of their beliefs. Being a non-believer this shouldn't really interest me at all. But I was watching a BBC docmentary called The Bible Hunters a few weeks ago and the author of this book, Janet Soskice, was one the contributors to the programme. Now I love tales of Victorian explorers (which was why I was watching in the first place) and mention was made of the book this author had written. Luckily, I discovered that Devon libraries had just one copy, in Exeter, and my son-in-law very obligingly grabbed it for me on one of his trips there. I have to say I was slightly daunted as it looked like quite an academic tome but I needn't have been concerned. It is quite academic, but if an ignoramus like me found it easily accessible, then anyone would.

Agnes and Margaret were nothing short of amazing. In a time when it was thought that a good education was not what women needed as their brains wouldn't cope, they were blazing the trail for female education. Only a few universities allowed women to study at them, and but they were not allowed to gain degrees. Cambridge was one of the last to allow that, even though Agnes and Margaret themselves founded a college there - Westminster - and it was foreign universities, German and Irish, who endowed them in the end with honorary degrees for their services to the academic world. And quite rightly so.

I found the retelling of the lives of these two women absolutely rivetting. Nothing is left out. If like me you enjoy reading about the travels of the Victorians then this will satisfy your leanings. Egypt in the 19th. century was a place heaving with excitement and life and I loved hearing about that. I'm not a bible person but still found all of those details fascinating too and not one bit of it was dry or uninteresting. This is surely down to the story-telling ability of the author, Janet Soskice. She's made what 'could' have been quite a dry tale, very readable indeed. Agnes and Margaret are there, warts and all, two very human ladies, and I almost feel as though I knew them personally. A wonderful book, an unusual choice probably, especially for me, but one I don't regret making at all. I wish the author had written other books like it but I don't think she has. Oddly enough someone in the book died reading The Antiquary by Sir Walter Scott, funny how these little things occur as I have that on my pile to read as my next book for the Read Scotland challenge. It's almost like a little message from across the years, if you believed in that kind of thing...

How amazing - what a life (lives)! I still haven't watched the programme - Dave recorded it I think!

Now I'm going to see if our library service can get me a copy of Sisters of Sinai!

It does sound excellent, Cath! Sorry I missed that show the bible hunters too.

In the blogging world you see the same books over and over again. It is always nice to see something different!

Margaret: I've only watched the first part of the doc. We have part 2 recorded hopefully. So pleased you were able to find a copy in your county library catalogue.

Peggy: The documentary might be shown on BBCAmerica at some stage. Keep an eye out.

Kelly: This is certainly different... even for me. LOL!

What an amazing story. I hope Margaret finds a copy in our library because then I can read it too :-)

Geranium Cat: I gather Margaret did find a copy (I think...) so you're in luck!