A Tiny Bit Marvellous by Dawn French was given to me a year or so ago by my youngest daughter who thought I might like it... me being a fan of the wonderful comedian, star of The Vicar of Dibley and one half of the comedy duo, French and Saunders. 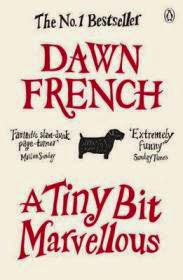 Mo Battle, a child psychologist, is fast approaching fifty years of age. Her life is all routine, family, job etc. but she's also trying to write a book about how to deal with children in their teenage years. Her own teenagers are Dora, almost eighteen and Peter, sixteen.

Dora is a pretty typical teenager. She's obsessed with her looks, with clothes, with fitting in, with friends. She thinks she's fat, has a best friend, Lottie, who she feels she would die for and she's not very academic. Dora also loathes her mother and they row constantly.

Peter is not your average sixteen year old boy. He idolises Oscar Wilde and demands that everyone call him 'Oscar'. He's very affected in his mannerisms, a bit of a dandy in the old-fashioned sense, and pretty much scathing about everyone.

In the background there's Dad, who doesn't like rows but behind the scenes, and reading between the lines, is pretty much the rock of the family.

Mo is with a small firm of psychologists, just her and her boss, George. Into the mix come Veronica and Noel, two junior psychologists who are to work with the firm as part of their college buddy scheme. Mo is assigned Noel, who is in his thirties, very good looking and from New Zealand. During a chance meeting Peter/Oscar falls madly in love with Noel. The problem with this is that Mo is also slowly finding herself very attracted to him. Noel is paying attention to her which is something she doesn't really have in her life at home. Will Mo take the ultimate step with Noel? And if she does, will the family manage to survive?

Each chapter in this book is written from the point of view of three of the characters, Mo, Dora and Peter. To do that it's crucial that the author gets the voice of each person distinct and individual: Dawn French manages this admirably. Mo, comes over very strongly as an over-controlling mother who doesn't realise that she is that way. Being a psychologist she over analyses everything, but you feel for her as basically she's just a mum trying to do her best for her family. You could slap Dora, quite frankly, but she too is vulnerable and scared a lot of the time. Teenagers are cruel and things happen which make you feel so sorry for her. When writing makes you infuriated with a character and sympathetic at the same time it must be pretty good.

The book is a bit slow starting in my opinion. This does allow time to really get to know the family but some might think it drags a bit and perhaps I did think so a little. I'm glad I persevered though as it takes off mid-way and becomes a bit of a page-turner. You can see the train-crash coming and after a while I couldn't put it down. What I didn't see coming was a brilliant little twist at the end.

A Tiny Bit Marvellous was Dawn French's first attempt at fiction after her autobiographical, Dear Fatty. I gather after writing that she realised she loved writing and didn't want to stop. My eldest daughter tells me that Dear Fatty is excellent, so I now have that on my library pile. My youngest says that her second book, Oh Dear, Sylvia is a terrific read too, so I'll be getting that at some stage. I'm so glad that Dawn made the decision to continue writing as she's very good at it. Having watched her for years on various TV shows her voice is very evident in her writing. But that's ok... she's a very funny lady and we need books that make us laugh, which this book does. But it also made me think a great deal, which gave the book a bit of an unexpected depth. I do hope she has something else in the pipeline as I think I'll be reading her entire output pretty quickly this year.

A Tiny Bit Marvellous is my second book for Bev's Mount TBR 2015 challenge. And that's two chunky books, so far, off this shelf: 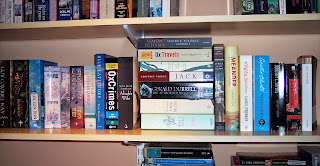 Overall, the reviews for this book have been pretty mixed to say the least. However I like that your review remained objective and thoughtful, whilst not too opinionated, leaving the next reader to decide on its merits for themselves.

I have to say that this isn't a book I have considered adding to my own shelves, but it really does sound rather good.

I have so many books that have been sat on my shelves for some length of time, that they are in danger of becoming obsolete classics before I get around to reading them. :)

I hope that you are both well.

wow 2 chunky books eh? I just finished a chunky one myself. It's funny how when they begin you keep noticing how big the book is and thinking "this better be good" lol...and with luck by the end of it you are sorry it wasn't longer!!! This certainly sounds like you found yet "another" author to go to! (oh hooray! lol lol)

You've made me think I'll have a look at Dawn French's books. One of my book group members has suggested we read Oh Dear, Sylvia, but so far it's not been high on our list (we all suggest books and then vote on the next book to read).

I certainly need books that make me laugh - the one I'm reading at the moment is so depressing (Susan Hill's The Betrayal of Trust). I'm going to see what the library has by Dawn French.

Yvonne: *Very* mixed reviews I'd say. And I can understand that completely.

Yes, I too have had some books on the tbr shelf so long that I end up being the last person in the world to get around to them. But I am slowly getting used to the idea that that's the way it is and it's impossible to read more than so many books in one year. Some will quite possibly never be read.

Pat: Yup, *two*! LOL!!! And the read bit of the book never seems to go down as you go along. And you start to wonder if you're going to be reading 'this thing' for months.

Margaret: My youngest daughter really liked Oh Dear, Sylvia. And as she was telling me about it, I have to say it did sound rather good. I shall definitely check the library to see if it's there.

Yes, Susan Hill can be a bit depressing, her ghost stories less so I find.

Awesome review, and I'm glad you said about the book starting out slow, since I picked it up to look at it, and the first chapter was a bit off-putting. I'll go back to it and keep reading it, as you say it gets better. And we love Dawn French in this house! Thanks for a super review, Cath.

Susan: The book is a creeper. I could easily have abandonded it several times early on as the family were driving me nuts. But about mid-way it took off and I'm glad I persevered.