My first non-fiction book for 2015 is under my belt at last. Untrodden Peaks and Unfrequented Valleys (a really snappy title that...) by Amelia Edwards is the kind of travel book I like... one where Victorian women troop off to explore pastures new and unexpected, thus defying expectations for women of that era - the 1870s. 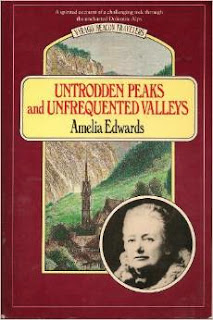 Amelia Edwards, born in 1831, was the daughter of a retired army officer and Irish mother. As such she was staunchly middle-class and money was not really an object. Never-the-less, unusually for those days, she had three seperate careers in her lifetime - that of a journalist, a novelist, and an archaeologist. She also became a very famous traveller, writing books about her journey up the Nile and, in this instance, a summer spent in the Dolomite mountains of northern Italy and southern Austria... popularly known as the Tyrol.

She was in her forties when she went - no spring chicken for those days - and it was in no way a relaxing holiday her and her friend had in mind. They intended to travel all over the mountains and valleys, which back then were pretty much inaccessible. Most places were reached by tracks through mountain passes that were difficult at the best of times. At worst, liable to flooding, landslides or impassable because of snow. This was one brave, indefatigable lady!

The two ladies used various villages as their base, staying in each one for a few days, sometimes longer, seeing what was to be seen in the area and then moving on. A primary interest seemed to be looking for paintings by Titian. It seems he was born in one of the villages, Pieve di Cadore near Belluno, and had done work in many of the churches before becoming famous: it was Amelia's opinion that not all of the paintings were genuine though.

Both ladies were enthusiastic walkers and did a huge amount of exploring that way. They were looked upon by the locals as objects of extreme curiosity, many of them not able to understand why they were there or even really the concept of a 'holiday' of that sort. Neither of the women were mountaineers but they did in fact climb one, the Fassa Thal, and that bit was particularly interesting.

There is, necessarily, a great deal of naming of mountains they saw. If you don't know the area, as I don't, then that becomes a bit tedious because the names mean nothing. That is more than made up for though by descriptive passages such as this:

At length when we have journeyed on and on for what seems an interminable distance, we come across a circular hollow in the midst of which nestles the Misurina lake - a green, transparent, tranquil tarn, fed as we are told by thirty springs, and rich in salmon trout and otters. The place is inconceivably still, beautiful and solitary. Dark rushes fringe the borders of the lake, and are doubled by reflection. Three cows stand drowsing in the water, motionless. Not a ripple disturbs its glassy surface. Not a sound stirs the air. Yonder, where the vista opens Northwards, appear the cloudy summits of the Drei Zinnen; here where the grassy lawn slopes down to the water's edge, the very sunshine seems asleep. The whole scene has a breathless unreality about it, as if it were a mirage, or a picture.

I defy anyone to read that and not be completely transported to that lake, at that time, in northern Italy: 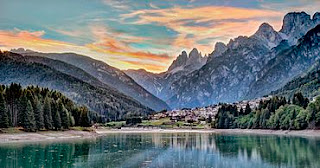 Amelia Edwards herself illustrated her travelogue. Sketches such as these:

This one is the Sasso di Ronch.

She was clearly a very talented artist and sketches like this are peppered throughout the book.

As can be surmised I really enjoyed this one. It gave me a real flavour of the Dolomites in the late 1800s... unspoilt, wild, quite primitive in the way of amenities, but utterly and stunningly beautiful. Amelia must have been an amazing lady, typical of the sort the British Empire produced in Victorian times I imagine. I'm definitely planning to read her book about Egypt, A thousand Miles up the Nile, sometime this year.

Those who have ereaders can find Amelia Edwards' three non-fiction travel and history books here on a website called A Celebration of Women Writers. I have a paperback copy, a Virago Travellers edition, that only cost me £2 and which I shall not be parting with any time soon.

Untrodden Peaks and Unfrequented Valleys is my first book for The Victorian Bingo challenge which is being hosted by Becky's Book Reviews. It covers the category 'A female author'. It's also my book three for Bev's 2015 Mount TBR challenge.

wow those drawings are fantastic!! I can imagine the freedom they must have felt...yet even today "explorers" get lost and die from lack of food and water...so they sure must have done something very right!! of a much more minor level I read a book once called: Remarkable Creatures: A Novel by Tracy Chevalier. It was "back in the day" and 2 woman find fossils by the sea when woman just didn't do those things.. loved the book

You find such interesting books! And as DesLily said those drawings are fantastic!

Those Victorian ladies had such stamina and courage.

Pat: Amazing drawings aren't they? Well they had one or two near misses but yeah. The book I'm reading at the moment, about mountaineering, goes into more detail about the people who did die on mountains... thousands of them.

Those two were women are mentioned in my current book funnily enough. I plan to read Remarkable Creatures at some stage as I like Tracy Chevalier's books. You might like her Falling Angels.

Margaret: I love trawling charity shops for something different.

Bev: This book is responsible for starting me on a 'books about mountains' binge. LOL!