Time to do brief reviews of what will probably be my last two completed books for this month - a fiction and a non-fiction.

First up, Tooth and Claw by Jo Walton.

Bon Agornin, the patriarch of a family of dragons, is dying and the family have gathered around his death-bed. The eldest son, Penn, a priest, hears his father's confession alone and against his better instincts, as confession is banned. He's shocked at what he hears. The old dragon dies. Tradition has it that the family get to eat the body as it brings nourishment and growth. Bon has let it be known that he wants his younger children to have the lion's share as they still have to make their way in the world. It's not in writing however and what happens is that his eldest daughter's husband, Daverak, decides to eat most of it, encouraging his own family to eat their fill as well. The rest of Bon's offspring are outraged but can do nothing. The two younger girls now have no home and to their despair are split up. Haner goes to live with her older sister and husband, Daverak, Selendra with Penn and his family. The only other offspring is Avan who lives in the city. He decides to sue Davarak after his outrageous behaviour but this will harm his sisters who are powerless now and have to conform in the households to which they're attached. There's no doubt that the lives of the two sisters have changed forever and they must both make the best of a bad situation.

What a curious world Jo Walton has created. I definitely think this will win the prize for the most 'different' book I've read come the end of the year. It's a world very similar in manners and customs to our Regency or Victorian period and it does read like a novel from Jane Austen or Anthony Trollope. Except of course that the characters are all dragons. And here's the thing: you forget that. They talk and behave like humans so you forget they're dragons... until a servant is eaten for making a mistake, or the runt of a litter is taken away and made a meal of, and you're brought up sharp and reminded that these are not humans. Very odd indeed. And it's a complicated world these dragons inhabit. Extremely hierarchical, hide-bound with traditions and rules, the women have very little power, servants have their wings bound... and hanging over all is the fear of being devoured alive by a stronger dragon who wants your job or because you're surplus to requirements or just plain 'weak'. It's all utterly fascinating and I loved it. Jo Walton is fast becoming one of my favourite authors.

Tooth and Claw is my book eight for Bev's 2015 Mount TBR challenge and my first book for Carl's Once Upon a Tine IX. 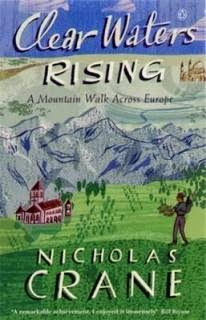 The author, Nicholas Crane, is a British TV presenter of documentary series such as the wonderful 'Coast', 'Town', 'Map Man' and 'Great British Journeys'. That's mainly been over the last 10 years... before that he was mostly a travel writer and explorer, travelling by bicycle and on foot around the world. Clear Waters Rising charts an epic 6,000 mile journey he undertook by foot across the mountains of Europe in the mid-1990s. Being a bit of a map person he apparently looked at the map of Europe one day and realised it was possible to walk the width of the continent by traversing only various mountain ranges. He started at Cape Finisterre, on the coast of Spain, and walked the length of that country along the Cantabrian range. Thence onto the Pyrenees which form Spain's border with France and from there to The Cévennes in France. Next, The Alps and through such countries as Switzerland, Italy, Germany and Austria. The Carpathian mountains followed, which I must admit I'd heard of but was not clear of their whereabouts. They actually go through such modern countries as Slovakia, Poland, Ukraine and Romania although the area abounds with ancient peoples who really don't feel part of the countries to which they've been asigned. Lastly, he traversed the Balkan range which took him through Romania and Bulgaria and into Turkey and thus to his final destination: Istanbul.

I think a map would help here:

I really enjoyed this travelogue. Nicholas Crane has a very engaging, self-deprecating writing style but also very nicely descriptive. Some of his adventures were amusing, some fascinating, some downright frightening... especially in the Balkans where he felt properly threatened for the first time on the whole trip. Mostly he came across kindness and friendliness and a willingness to talk. Hunters with dogs scared him rather. A weird, ghostly experience one night in The Alps also scared him. He did the walk not long after the Iron Curtain had come down and the situation in those countries was sometimes a bit hairy. He even decided not to go into Serbia as he was too worried for his own safety. But overall it seems he was amazed that he'd actually acheived his goal after 14 or 15 months of non-stop walking, and I have to stay I find it astonishing that he did. An excellent read and I'm pleased that I have another of his books on the TBR shelf: Two Degrees West, in which he walks the length of the UK along the Central Meridian.

ahhh I do remember this book from a number of years ago! you are rolling right along!

I began rereading Michael Scotts the Alchemyst. only have the first 70 pgs read but find myself enjoying it again!!

Oh golly gosh I have a Nicholas Crane from 1984 "Cycling in Europe" well read just before setting of on a trip Cycling in Europe that year...doesn't that seem a while ago. I hadn't realized that he had written more books ..now I shall have to look them out . I shall label your blog as Officially Dangerous to the tbr pile.... lol
(actually this is a good thing as when I'm stuck for what to read I know where to look!)

Two amazing books! One of my books I'm reading for Once Upon a Time also features dragons, so far not terrifying - but the ones in your book sound do sound terrifying!

Nicholas Crane's TV programs were very interesting and I think I'd like his books - I'll see if my library has any of them.

Pat: I thought the book would ring a bell once you read about it. lol

Val: Cycling Europe is one of his books they mention on Goodreads and that I'd like to get hold of at some stage.

I shall wear my 'Officially Dangerous' badge with pride.

Margaret: I know they sound terrifying but they're really not. I know how odd that sounds.

Yes, I too enjoy Nicholas Crane's TV programmes and he writes just the way he talks on TV.

Now I definitely have to try Tooth and Claw. On the surface, it does not sound like my kind of book but I do like Jo Walton's writing and your description makes it sound good.

Tracy: It's such an intriguing, 'different' kind of book. Definite shades of Anthony Trollope and so forth. What an imagination Jo Walton has.

I just read my first Jo Walton book (Among Others). This one sounds so very different, and I do think it shall be my next Walton! And I must admit, the travel book sounds quite fun too--think I'll be adding it to my list as well. :)

Debi: I just love Jo Walton's writing. Among Others blew me away. I found your review of it but am pushed for time at the moment so will read it properly later. Tooth and Claw was just great. So imaginative.