So sad to hear of the death of Sir Terry Pratchett today. I came late to his books... over the last 15 years or so... but the minute I started reading them he became a favourite author and I've probably read more of his books than any other author. He was without a doubt a genius with words and will be sadly missed. 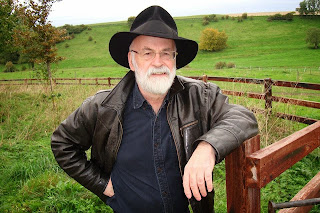 Regarding the very different (to us anyway) astronomical situation of the planet of Helliconia I shall quote from my own review of the first book:

... the most important thing to understand is the astromony of the system to which the planet of Helliconia belongs. It's one of several planets that revolve around the star, Batalix. All of these in turn revolve around a much bigger star, Freyr. Helliconia is a planet with two suns. What this means for this inhabited planet is that basically it has two years. One is around the same length as ours - slightly longer - and the other is over 1,800 years long. What prevails, climate-wise is the year that is 1,800 years long, which means that the seasons they get are each nearly 500 years in length.

Their winters are like an ice-age, their summers unbearably hot to the point of extinction of huge numbers of the population. In the space of one of these centuries long 'years', whole civilisations rise and then are brought to the edge of extinction again.

Each of the three books focuses on the changes that occur as one season becomes another. Specifically how it affects the human population and, to a lesser extent, other beings and animals on the planet. One character tends to take centre stage and in this autumn to winter instalment it's one, Luterin Shokerandit. Luterin has been born and brought up in the town of Kharnabar, which is in the far north of the northern continent of Sibornal. (Think northern Alaska.) His father is Keeper of the Wheel, an important relgious position on their world. Luterin expects to inherit the position but is shocked when his father sends him away to serve in the army.

The young man ends up fighting in a campaign on the southern continent of Campannlac. The Sibornal army is successful and would expect their return home to be a cause for huge celebration. But this is not what happens. Luterin, another officer, Fashnalgid, and a slave woman, Toress Lahl, end up on the run. But winter is fast approaching and the ruling Oligarchy is publishing edicts that are increasingly draconian, inhibiting the freedom of the people, ostensibly in an attempt to help them through the five hundred year long winter. But is that really what they're doing?

Of the three books I think this was probably the weakest. That's not to say it was bad in any way, shape or form, just not quite as strong. I enjoyed following the adventures and travels of Luterin and his band of misfits, particularly the various journeys... aboard ship, by sledge through the mountains to his home and so on. The characters are well drawn and, like real people, have many faults and foibles, behave both badly and honourably. I feel the author is better at writing men than women but there you go... that's often the case with male authors.

What didn't work for me is that in this instalment the author took to philosophising in regard to what was happening to humans back on Earth over several thousand years and also on the spaceship that has been filming events on Helliconia. I don't mind some reflection on the human condition... why we're aggressive and why so much war, etc. But it became rambling and quite frankly 'weird' and didn't work for me as it should have done.

Anyway, regardless of that this science fiction trilogy is very good. I like the gigantic scope of the work - everything is so well thought out and on such a massive scale that it's really quite astonishing. It's perhaps not 'alien' enough for my science fiction tastes but that's ok, there are plenty of other books that are and this one scores high on world building and astronomical data and ideas. Rarely can you have it all... unless you read Robin Hobb, Anne McCaffrey, John Connolly... I'm sure others have their own opinions on authors who supply it all.

It is a real shame about Terry Pratchett. I have so much still to read by him so I guess I better get cracking!

Even knowing that Terry Pratchett was ill and knew the outcome..it never makes it easier.

wow 7 books from the tbr pile! congrats! (of course by the same token I will bet more then 7 were added lol lol)

Kelly: Yes, loads of books to choose from.

Pat: To be honest I had no idea he was so close to passing away.