At last, a book review from me. I'm having rather a slow reading month... almost three weeks into April and I've only read three books. There are reasons - Easter, family stuff, the garden is getting underway now and things need tidying after the winter... seeds planting and so forth. All good fun and let's face it, my books are not going anywhere, they'll be here when I'm more free. Anyway, the book I've just finished is Un Lun Dun by China Miéville. 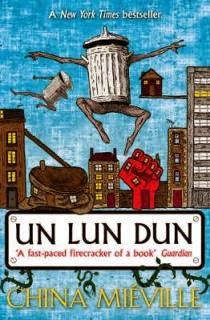 Twelve year olds Zanna and Deeba are best friends at school and at home. Deeba starts to notice that odd things are happening around Zanna, animals staring at her as though they recognise her for instance. One of their friends is nearly killed in a car accident caused by a very strange foglike substance. Then one night they look through the window, down into the street, and see a broken umbrella acting as though it's watching them - it then stumbles off. They go out into the night and follow it and end up in an underground tunnel turning a wheel that takes them to a place that seems wrong in every respect.

'Unlondon' is an alternative London where rubbish or abandoned things end up. The buildings are made of defunct items such as typewriters or old washing machines, one has a forest inside. The people aren't quite right either. One man is made of printed paper with a pincushion for a head, another wears a diving suit that hides his appearance. There's a stange individual called Brokenbroll who has control of all the broken umbrellas that 'come over' from London. And there are ghosts and a half-ghost boy, Hemi, who befriends them.

The two girls are told that Zanna is the chosen one, the 'Shwazzy' (from the French: choisi). Unlondon is being besieged by an evil Smog and it's been prophesised that a blonde-haired girl will come from London to save them. Zanna is the one. But is she? After a run-in with the Smog the girls return to their own London with Zanna's memory lost. And thus it's Deeba who worries about how things are in Unlondon and Deeba who finds a way to return. She's not the chosen one but must nevertheless find a way to defeat the Smog, not just for Unlondon's sake but for her own London's sake as well.

Ok, so this wasn't quite what I was expecting. I think I thought it was aimed at young adults of, say, 14 to 16 but I think it's more aimed at the 10 to 14 age group instead. Not that it matters as people of any age could read and enjoy it but it's nice to be aware. China Miéville's adult books are unusual I gather (I haven't read any) and possibly a bit challenging. Un Lun Dun is definitely 'unusual' but is not at all challenging to read... not for adults anyway. I think 10 year old children might find it so but also find it worth the effort as it's full of imagination with some very different, sometimes creepy, characters. All kinds of wierd things going on with every-day objects like umbrellas used as weapons, buses flying around the sky, a forest growing in a house, Westminster Abbey the centre of a spider's web that's full of portal type windows. Yes... it's that weird. But it works and is great fun.

Where it came up a bit short was in the characterisation. I never really felt much of a connection to Deeba. I admired her bravery and dogged determination to defeat the Smog but she didn't always feel like a real twelve year old girl. I think we may be back to my age-old complaint that most male authors just don't write girls or women very well. What I do admire is that the author did it at all. The fantasy genre is choc-a-bloc with books with young male protagonists so all power to China Miéville's elbow for being prepared to give us a strong 'girl'. It makes a refreshing change.

I'll be putting this one aside for my grandson to read in a year or two as I think he'll like its oddness and imagination. Although at the moment he's showing signs of being more of a non-fiction fan where books are concerned... with a definite liking for books full of facts about the natural world. To be honest, I'm just happy that I have two grandchildren who like to read.

I've heard of this book before and it never moved me...
I am a tad slow on one of your favorite books Gaudy Night. I have trouble remembering who's who! but enjoying the story.

This does sound an unusual book. I like the title and the concept of an alternative London. I'm wondering if my grandson would like it. He's 13 and likes jokey type books, so I'm not sure, but it may be more in my younger granddaughter's line (she's 10 this year).

The garden is taking up more of my time now - there's just so much to do. It's all so time-consuming!

I meant to add - DesLily, I had trouble remembering who was who in Gaudy Night too! Still enjoyed the book immensely.

Pat: The book was fine but not where I want to run around like a headless chicken forcing people to read it.

Yep, I had trouble remembering who was who too and so did Margaret, so it's obviously normal with this book. Glad you're enjoying the story.

Margaret: The concept of the book is fascinating, I'm just not sure it's the book I wanted it to be, but then it's not aimed at me.

Hard to say which age group would like this as it's a long read and it depends on the reader. My grand-daughter is coming on for 15 now and I probably would not recommend it to her as she might find it a little simplistic. Our grandson is 8 and although he could physically read it, I think the length would be a problem. He likes non-fiction he can dip in and out of or shortish 'jokey' type books like your grandson.

Here we are zipping through the year and I am having more than just an Off reading year, so I can sympathize! I like the *sound* of the story--the premise sounds like fun. Alternate histories can be really good sometimes! Hope all is well with you!

This one didn't work for me- but I handed it to my ten-year-old and she liked it. So much she was reading funny passages aloud to me, and asking what unfamiliar (British) words meant.


Nice detailed and informative review Thanks Cath haha my brain wouldn't cope with the complexity but One for the girls TBR pile ;o)
youngest has discovered John Flanagan and is reading and rereading at an incredible rate !

Sounds like a great fun read. April has been slow for me too in the reading department and I'm sure May won't be any better!

Danielle: I'm certainly having a much slower reading year than last year. Ten books less than this time last year. But that's fine, I intended that and have been really happy with quality over quantity this year.

Jeane: Yes, I really did think it would appeal to the ten year old age group and am pleased your daughter loved it. For me, it was OK but not wonderful.

Val: I definitely think your girls would enjoy it. I'll look up JF to see if the author might be suitable for my grandson.

Peggy: I'm hoping May might be a little better but with the garden in full swing I have my doubts.

My own reading has been slow moving right now as well, Cath. It will pick up, but, am feeling that void in my life right now. So it goes . . .

I'll keep this one in mind.