Two brief (well, I'll try...) reviews to catch up on today, a fiction and a non-fiction. First up, Angel With Two Faces by Nicola Upson which is my book two for Bev's Mount TBR 2016 challenge. 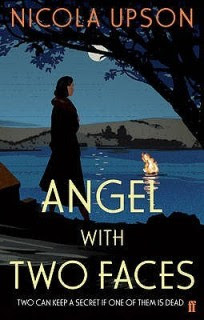 Josephine Tey needs to get some work done on her second Alan Grant Novel (it will eventually become A Shilling for Candles) so she accepts her policeman friend, Archie Penrose's, invitation to holiday in Cornwall at the home of his family. Archie comes from the area around Loe Pool near the village of Porthlevan, his uncle being the owner of a local private estate. He ends up having to go ahead of Josephine to attend a funeral. A young man, Harry Pinching, has drowned in the pool, a riding accident by all accounts. But was it? The man's sister, Morwenna, hints to Archie that she suspects her brother may have committed suicide. But why would a fun loving young man with a real zest for life do such a thing? As soon as Josephine arrives she becomes embroiled in the mystery. She's horrified to discover how many secrets are being harboured in such a small community. Very soon she doesn't know what she can say to whom and realises this could threaten her relationship with Archie. One thing is for certain, answers lie in the past... and it's about to catch up with them all.

Slightly torn by this one. On the one hand, I loved the setting: I've walked at Loe Pool (it's a lake separated from the sea by a sandbar) and it's just as beautiful as the author describes, so that was very evocative for me. Josephine was there for the bluebells and I too have been there at that time of year and it's stunning. It's quite clear the author, Nicola Upson, knows that area rather well. (But then she is a 'local' author as she attended a crime panel I went to at my town's literary festival last summer... which is where I bought this book.) So that aspect of the book I liked. What I found a wee bit tiresome was the fact that every single person in the book had a secret and, like poor Josephine, I got rather confused and lost in the detail. It all felt a bit melodramatic to be honest, a bit overdone. Some of the characters were a bit clichéd such as Morveth, a teacher who is also a bit of a healing woman and slightly batty (or so it seemed to me), and Morvenna's sister, Loveday who's a bit fey, and the evil vicar who's Up To No Good. It was a good enough story to keep me reading to the end though, a decent mystery, and I do like Josephine and Archie. But I don't own any more of the books and if I do decide to read more I'll probably get them from the library.

Lastly, Greece on my Wheels a non-fiction travelogue by Edward Enfield. This is my book three for Bev's Mount TBR 2016 challenge and my book one for Rose City Reader's 2016 European Reading Challenge.

Edward Enfield is the father of the well-known British comedian, Harry Enfield. He was pretty much unknown when he appeared on the BBC's consumer programme, Watchdog, representing the older person's point of view. He then wrote for the magazine, The Oldie, for many years. He's written several books about cycling in various parts of Europe and in Greece on my Wheels he does two journies, one around the Peloponnese and the other, Epiris and Acarnania... both in Greece of course. The style here was chatty and informative. You really get a taste of the Greek countryside, how mountainous it is, how beautiful, and also the heat. The author was 71 when he undertook this trip and you have to admire his stamina! He clearly enjoyed the food and the wine, and he often advises about where to stay and where to eat if you too are holidaying in these areas. Very useful. Edward Enfield wanted to do the journey as he's very keen on Greek literature and history and there's quite a bit of that included in the book, especially various conflicts between Greece, Albania and Turkey. Other countries - including Britain - also had their fingers in the pie too and not always in a good way, in fact, mostly not. He also followed in the footsteps of other travellers and he often includes excerpts from travelogues by Lord Byron, Edward Lear, Benjamin Disraeli and John Hobhouse. These I really enjoyed and would love to search out the original books and read those, particularly Byron's. I knew he was a bit of a hero in Greece for his role in their war of independence with the Ottoman Empire, but not quite how much... he did in fact die during the conflict. All very interesting and I feel as though I learnt quite a bit from reading this travelogue about Greece. I shall search out more by Edward Enfield - I think there's a book about cycling around Ireland and one where he follows the route of the Danube - as he manages to be both informative and entertaining in his writing.

Well speaking of off and running.. you sure are reading up a storm this year!! Other than A Walk in the Woods I can't say I've ever read a travelogue. You read quite a few "reality" books about different areas..
Today is going to be a stormy day so I guess I will get some reading done. I have to start a new book so it will take me time to choose it lol.. I find it so odd that all these books I have I read the flap or the back and said "oh yeah!" but when I go thru them now looking for something new I sometimes wonder why I picked them out in the first place!!!! go figure lol..

Hmmm...I think I may try the first book in the Tey series and see how I go. I'm interested in the series, but I'm not buying right now and not really supposed to be checking out from the library with the Triple Dog Dare. Ah well. We'll see if I can even find it. Maybe I'll just reread an old favorite, Bride of Pendorric by Vicoria Holt instead. For the Cornwall setting. The name Morvenna (or rather Morwenna in Bride) made me think of it.

I subscribed to The Oldie for a while and just loved it, but couldn't keep paying that overseas price! But oh, I did enjoy it. I looked up Enfield and he's written a gardening book we both might like. Growing to a Ripe Old Age: 50 Years in the Garden. 2012. I am interested in the Greece book, knowing almost nothing about this country and the area. It just may be that all I know comes from a Maeve Binchy book!

I've read a couple of Nicola Upson's books, but not this one. I think I prefer Josephine Tey's own books (I have A Shilling for Candles still to read). I thought the two books I read were interesting enough, but was confused by the quick introduction of too many characters and had difficulty in distinguishing who a lot of them were. I think you're right about borrowing any more rather than buying them.

I do like the Nicola Upson books, but I tried one based on Tey's foray into film with Hitchcock and it did nothing for me and I abandoned it. I have been put off a bit since. I did enjoy this one though.

Pat: Yeah, I thought I'd get a really good start on my Mount TBR challenge and so far this year I've read four for it with two more partly read. And yep, I do like a good travelogue telling me about places I'll probably never get to go to.

I *always* take ages to decide on a new book and like you often wonder why the heck I bought various ones. LOL!

Nan: Yes, I saw that he had written a gardening book. Well done on finding a copy. Look forward to hearing whether it's a good read. I suspect it will be if his writing style in the Greece book is anything to go by.

Margaret: Yes, I think I prefer JT's own books too. And something feels a bit odd when an author takes a real person and makes up stories about them. I can't decide where I stand on that to be honest. It makes me feel that I probably won't read more.

Jo: I definitely prefer the non-acting stories to the acting/theatre/film type ones. Although there is even a theatre production in this one, which was the least interesting part for me.