It's a bit disconcerting when the first fiction book you read at the beginning of a new year is stunningly good. You almost feel a bit twitchy about it... as though you have no right to come upon a terrific book in the first week of January. And there's also that uneasy feeling that it might be downhill all the way from here. Hence the twitchiness. Anyway, regardless of me and my peculiarities, the excellent first book is The Franchise Affair by Josephine Tey. 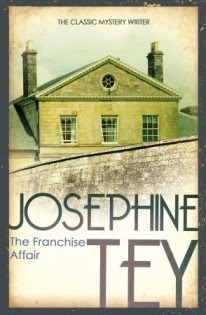 Middle-aged solicitor, Robert Blair, is about to leave his office to go home, late one afternoon when the phone rings. Five minutes later and he would've missed it and his very routine, his cozy life, would not have been changed forever by that call. On the line is Marion Sharpe. Miss Sharpe lives with her elderly mother in large house, The Franchise, on the edge of the sleepy town of Milford. The two are quite reclusive so are not well known in the town: Robert barely knows the woman.

Miss Sharpe tells Robert that the police are in her house accusing her and her mother of kidnapping a teenage girl, Betty Kane, locking her up in the attic for several weeks and trying to coerce her to work for them as a maid come cleaner. They deny all knowledge of this. Robert tries to convince Marion to phone a solicitor more experienced in criminal law, in all honesty he doesn't really want to touch the case. She refuses and he heads off to The Franchise.

It subsequently falls to Robert to investigate the girl's claims as the police are happy to let things drift until real evidence materialises. She knows all about the inside of the house and can describe the attic and its contents. The girl appears to be an innocent 15 year old, demurely recounting her tale of woe and the whole country is outraged at her treatment. But for some reason he can't fathom, Robert doesn't believe her. He hopes it's not because he's falling under the spell of Marion Sharpe. He needs cold, hard evidence of where this girl actually was when she said she was a prisoner of the Sharpes. It's a long and tedious road the solicitor is embarking upon. What he needs is one of his Aunt Lin's miracles...

I knew within 2 or 3 pages that I would love this book. Why? Well it's just so beautifully written. So much gorgeous observation of real people and their little quirks. The way routine can easily become so much of your day to day existence:

"At 3.50 exactly on every working day Miss Tuff bore into his office a lacquer tray covered with a fair white cloth and bearing a cup of tea in blue-patterned china, and, on a plate to match, two biscuits; petit-beurre Mondays, Wednesdays and Fridays, digestive Tuesdays, Thursdays and Saturdays."

This about Aunt Lin:

"Have you had a nice day dear?" Aunt Lin asked, opening her table napkin and arranging it across her plump lap.

This was a sentence that made sense but had no meaning. It was as much an overture to dinner as the spreading of her napkin, and the exploratory movement of her right foot as she located the footstool which compensated for her short legs. She expected no answer; or rather, being unaware that she had asked the question, she did not listen to his answer.

In a few short sentences you know everything you need to know about Aunt Lin. Josephine Tey was so honest in describing feather-brained women like this that it's almost cruel. If the author was a man you might actually say so, unfairly I think because people like this do exist and pretending they don't is dishonest.

One of the crucial things to know about this book is that although it's listed as book 3 in the Alan Grant series, it really isn't. Inspector Grant makes three or four appearances where he's not even a particularly sympathetic character... he's the one charged with investigating Betty Kane's claims but he really doesn't seem that fussed about discovering the truth. This book is about the solicitor, Robert Blair. And the odd thing is... I didn't mind at all. I'd go so far as to say that of the three Alan Grant books I've read so far, this is by far the strongest. And I'm a bit perplexed by this, him not actually being in the book very much. I'm wondering if it's because the first two were rather theatre/stagey and that isn't particularly my thing. Whereas a story about a small town solicitor dragged out of his comfort zone into the real world to investigate a nasty little case where everyone turns against the accused, was, for me, utterly rivetting. Plus, as I said before, so beautifully written. Sly observations of people's behaviour, Miss Marpleish in their pin-point accuracy, just make this book come alive and you end up chuckling to yourself, even when sometimes you probably shouldn't.

Interesting to observe too that although this is a 1940s book, their problems with tabloid newspapers and mobs outside the houses of people accused of crimes was exactly the same as ours in the 21st. century. Nothing changes it seems. Indeed, this didn't really feel like a 1940s book at all apart from one or two attitudes of the time. The whole nature of the story felt like it could have happened last week, not 70 years ago. It's quite an achievement to write such a timeless story. I can't wait to read more by Josephine Tey and am inclined to try her two standalones next, Miss Pym Disposes and Brat Farrar.

The Franchise Affair was my first book for Bev's Mount TBR 2016 challenge and also my first book for her Vintage Mystery Cover Scavenger Hunt challenge. I'm using it for the category of 'Spooky house or mansion'. I realise it doesn't look madly spooky but as it's described in the story as 'that dark silent house set down among endless fields', I think it pretty much qualifies.

great way to begin your reading year!! I hope the rest of the year brings us many "super good" books!

I have not ever read a Tey book and I think I've meant to. This one sounds lovely. But I don't own it at this point. Will keep it in mind for later. Have you read any of that mystery series by Nicola Upson (think that's the author) that has Josephine Tey as a character? I have not, but noticed a new entry is coming. Might be an interesting pairing.

It has been far too long since I read this. And Brat Farrar is fantastic so I hope you do read it!

Pat: That's the thing... We can't really expect lots of super books. The great ones are the exception but that makes us really appreciate them when we find them.

Kay: Yes, I've read the first in the Nicola Upson series, which wasn't bad. And your asking made me remember that I have book 2 so I've just started that. It's set in Cornwall so it's perfect for me. Last June I went to the Town Literary Festival and Nicola Upson was at the crime stories event with two other local crime authors. It was a very enjoyable afternoon... all three authors were very entertaining.

Kristen: Excellent! I will get to Brat Farrar this year, thanks for the rec.

It's a Cracker isn't it!
How fun to have a New author to look forward too! and I don't believe she wrote a duff book (but if you come across "Kif" it's is definitely not in the same vein Very powerful but also very sad)
When you've read Brat Farrar try The Ivy Tree by Mary Stewart...gosh I think I'll have to do some rereading!
The BBC did a fun radio version of Miss Pym disposes a while back if you want me to turn my wireless up let me know :o)

Val: A real cracker! I was so surprised, though I'm not sure why. OK... that's a Mary Stewart I don't think I've read, used to read a lot by her when I was in my 20s. Especially loved her Merlin trilogy.

Yes, turn your wireless up! ;-) I think my next JT will be that one in fact as I do like a school yarn.

This is the second time in the past few days that I've heard great things about The Franchise Affair. Looks like I'll need to move it to the top of my list! I find Josephine Tey very hit-or-miss...I loved Brat Farrar, was ambivalent about The Daughter of Time, and really didn't like The Man in the Queue.

Youbookmeallnightlong: I think you're right about JT's books being a bit hit and miss. I liked the first two books when I read them but since then have not found them madly memorable. The Franchise Affair is another matter, I liked it a lot, so I'm now interested to read more to see which ones I love and which I can take or leave.

I just finished it. What a good, good story!! You wrote a really wonderful review. Mine is very short and sweet. haha. Did you see this link? https://en.wikipedia.org/wiki/Elizabeth_Canning

Nan: Gosh, I did ramble on about this book didn't I? LOL Testament to how much I loved it I think. I shall definitely read this again at some stage. You have some treats in store for you with the rest of the Alan Grant books.. To Love and be Wise I thought was also very, very good, the Richard III one (title escapes me right now) was incredibly interesting. Miss Pym Disposes, a standalone set in a girl's school, was also delightful. So sad that she died so young.

I'm so pleased you took the time to write back. Not rambly! Just so very good. I do look forward to her other work and the biography. I was amazed that there was a real story this book was sort of based on.