Anyway, moving swiftly on, I read 9 books this month - same as last month oddly enough - perhaps I've moved on a bit from my average of 6. Maybe. Regardless, it was a good reading month quality-wise and that's what counts.

Basically, this is a super book about the author's move from Nottinghamshire to the South Hams of Devon where he takes up walking miles every day, particularly up onto Dartmoor. The book is about these walks, the wildlife he encounters, his animals, his neighbours, but also his childhood, family, and involves much cogitating and meandering from subject to subject. I was particularly taken with his father whose speech he quotes in capital letters and whose mantra is 'WATCH OUT FOR FOOKWITS AND LOONIES'. Hilarious.

Wonderful book, written with a lot of love I think.


44. Maigret and the Old People - Georges Simenon. Very underwhelmed by this one so did not review.

47. Perfume from Provence - Winifred Fortescue. Another book not reviewed because of lack of time.

The author and her husband move to Provence in the 1930s to start a new life away from depression Britain. War was rapidly approaching of course but they didn't know that and it doesn't intrude upon events in this charming book. Beautiful writing makes for a very strong sense of the south of France and I really enjoyed hearing about the vagueries of the neighbours, the maid, the gardener, the car, the weather, workmen and so on. Gardening features very heavily and it was interesting to hear about planting according to the cycle of the moon and so on. Also enjoyed the gardener's determination to have the garden as he wanted it rather than as Lady Fortescue wanted. Charming and delightful.

49. An Incomplete Revenge - Jacqueline Winspear. To be reviewed.


So 9 books, 2 non-fiction, 7 fiction, all of those murder mysteries. It was such a good reading month, with ony one dud, that it's too difficult to choose a favourite. All but one of the crime stories were excellent and written by my favourite crime writers of the moment. So lucky to have such a good pool of 'go to' authors such as Louise Penny, Martin Walker, Jacqueline Winspear, Freeman Wills Crofts, Dorothy L. Sayers, Elly Griffiths and others that I've just started reading and will probably add to the list soon, such as A.J. MacKenzie, Damien Boyd, Betty Webb, Michael Gilbert. My cup runneth over.

Black Roses by Jane Thynne is a 1930s crime story, the main character being an actress working in Germany during the rise of the Nazi party. Fascinating. Blue River, Black Sea by Andrew Eames is about the author's journey along the Danube by bike, so two books about Germany although the author of the latter has just crossed into Austria. I seem to be reading quite a lot about this area of Europe this year.

Not sure what the plan is, reading-wise, for August, some of these I suspect: 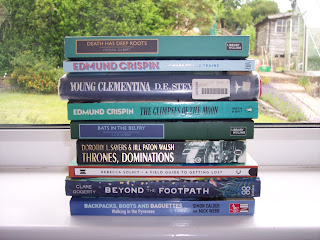 Reading nine books in one month, and having eight of them turn out to be winners, is a great reading month.

That Tom Cox book appeals to me, so I'll have to see if it's available in the U.S. Some of my fondest memories of the U.K. involve all those glorious walks I made on weekends with a friend of mine. We often had to ride the train back to London with cold, wet feet but I wouldn't trade those walks for anything. It's amazing what you can see from that pace.

Sam: I agree, it's better than a lot of months where 'average' is the norm.

The Tom Cox book was a joy to read quiet frankly. Possibly a lot of its appeal for me was the Devon aspect because I live there and know some of the places he mentions. But the people in it are wonderful too. I'm so pleased you have such fond memories of your time here.

Ummm 9 books?! Did you sleep during July??? lol ! That's incredible! You are a speed reader for sure!.. the good part is that you still enjoy them!!! I wish I could read like you.. it seems I did once.. but only once LOL...

Cath, I enjoyed looking through your list, and it reminded me to add some authors to my list.
Betty Webb for one, and A. J. Mackenzie.

I am having the same issue, the months are going so fast, reading-wise at least.

I am so behind with blogging I can't remember when I last wrote a monthly summary. But I am reading lots right now - 9 for me as well in July. I also have a copy of Black Roses, but it's still deep within my Kindle! And a paperback copy of The Winter Garden also by her sitting on my bookshelves, waiting to be read for the last four years.

Tracy: Yes, those two authors are excellent. The trouble is, there're quite a few excellent authors and it's quite difficult to get to them all.

This 'time going so fast' thing gets a bit scary as you get older.

Margaret: 21st. Century Yokel is one of those really lovely books.

So hard to keep up with blogging at the moment. It's summer so we're in gardening and grandchidren mode right now. Everything else has to take second place. Ah yes... the Kindle black hole. I know it so well. LOL