Desert Noir is the first book in the 'Lena Jones' mysteries by Betty Webb. Kay at Kay's Reading Life mentioned the series here and, intrigued, I thought I'd give them a go. Luckily my library catalogue had a copy of this first book. It qualifies for Bev's Calendar of Crime challenge under the June category of 'original publication month'. 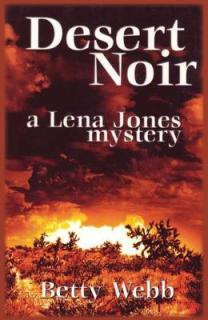 Lena Jones has left the police force in Scottsdale (or possibly Phoenix?), Arizona, after suffering a bad injury. She's set up her own private investigation bureau, employing Jimmy, a Pima Indian, as her computer expert. Lena has had a very rough upbringing. Shot by persons unknown when she was four years old and then passed from one foster home to another, Lena is a survivor, but a bruised one.

Her offices are on Scottsdale's main street just opposite various art galleries and shops. One of them is owned by a friend of Lena's, Clarice Kobe, who is from a wealthy but dysfunctional family. When Clarice is found beaten to death in her gallery, Lena feels she owes it to the woman to find out who did it as she was one of the few people locally who made overtures of friendship towards her.

Suspect number one is Clarice's ex-husband, Jay. While still married to him Clarice often bore the scars and bruises from the regular beatings he inflicted upon her... but it seems he has an alibi from his new girlfriend. No one is convinced by it though. But what about George Haozous, the Apache artist, who was constantly rowing with the dead woman over her keeping his violent and graphic work in her gallery? And the family of an elderly woman who died as a result of Clarice's involvement in a new property development? Lena slowly realises that she didn't know her friend as well as she thought she did. The woman clearly had a dark side and quite few people are not sorry she's dead. But who hated her enough to murder her?

Well, I rather fancy that this is not a series for all. Desert Noir is certainly not a 'cozy'. It delves into the darker side of life and pulls no punches about the urbanisation of the Arizona desert and how it's not always arrived at honestly, although it must be borne in mind that this is 'fiction'. Nevertheless, I was unaware of it so I certainly learnt a lot from reading this and found it all fascinating. Oddly enough, the book I've just finished, How the Light Gets In, an Armand Gamache story by Louise Penny, touches on the same thing, but in Quebec. Both reach the same conclusion, that there's not a lot of honesty in the construction industry.

So this not really a crime book to cheer you up. Lena herself is badly damaged. Shot in the street, aged four, by someone she was with but can't remember, she is scarred for life. Her search to find out who she is and who shot her is clearly going to be an ongoing theme and she makes some headway in this story. The mystery of who shot Clarice Kobe was well handled, I didn't guess who the culprit was and I usually do, so that's good.

To be honest the best thing about this book is its sense of place. The Arizona desert comes alive, one scene towards the end about survival out there was terrific. I also enjoyed the American Indian connection and learning new things about the tribes - Pima, Apache, Hopi etc. And I really liked Jimmy. I plan to read on in this series and hope these themes are enlarged upon in future books.

Glad you reported on this one, Cath. Yes, Betty Webb does expand on all the themes you mentioned. Lots of info about the area and the native peoples that live in the region plus the people that came later. Lena gradually finds out about her past over the course of the series. I love Jimmy too. As I've now finished the whole series (10 books), I can also repeat what you said about the stories being more than a bit dark at times. Lena has had rough time in life and as she discovers more about it, she stumbles over many bad people.

So glad you liked this one, Cath. I won't expand on what Kay said, but I thought I'd share a link to Betty's most recent appearance at The Poisoned Pen. It has information about how Desert Noir came to be, the inspiration for the gallery owner who's killed in the book, and other goodies.

In the mystery genre, there are two authors who give superb descriptions/information about the Phoenix metropolitan area, and Betty Webb is one of them. That scene you mention toward the end of the book that deals with survival out in the Sonoran Desert is one of the main reasons why I had to continue reading the series. So many times you see scenes on TV programs or in movies about people stranded out in the desert, and they're just ludicrous. Betty nails that scene. There's plenty of the "middle of nowhere" here, and the land is unforgiving. You do not want to be stranded out in it.

I've always been fascinated by America's native population, and I am always up for stories that explore their current culture. We have a reservation about 90 miles northeast of me that I've visited a few times with my grandchildren in tow, and it's good to see them doing so well. The reservation has been there since the mid-1800s when two tribes, one from Alabama and one from Tennessee, were forced to move to Texas and share the one reservation. The two tribes now consider themselves to be one. It is only in recent years, however, that they have started businesses along the highway that passes through the reservation to offer services to those passing through. I'm not sure where, or how they finally found the capital for construction and start-up, but they have been doing well for the last 10-15 years. Finally.

Kay: Very pleased to hear that all of the things I hoped would be in successive books actually are. Look forward to reading them. Annoyingly my library only has one more in the series and it's not book two. Never mind, AM will fill the gap.

Cathy: Thanks for the link, will check that out tomorrow. I see that desert scene towards the end gripped you too... I was blown away. I'm pleased to hear she nailed it, coming from England it's not something I would know anything about about, but now I feel I know at least a little bit about what such a thing would be like.

Sam: That's so good to know and thanks for your insight. As I said to Cathy, across the pond we know nothing of these things and that's a shame as I find it all absolutely fascinating. I remember reading one of Laura Ingalls Wilder's 'Little House on the Prairie' books several years ago where she described the beginning of one of the 'long marches', and how moving and tragic I found it. The info is out there if we care to look but it's not always easy to find.

There is often more truth and fact in fiction than there is in non-fiction, it is all a matter of working out which is which! I like that the story is set in a part of the US I haven't so far read too much about

Ratings and reviews for this one have been very mixed to say the least, with you obviously enjoying it much more than some!

I'm still not sure whether I want to get in on this particular story, however your well constructed and informative review was great in getting me up to speed with things.

I can 't wait to see where you are going to take us on your next journey :)

Kay has a wide reach! I just picked this one up from the library on her recommendation. I haven't started it yet, but I'm excited that it's set in Arizona, where I live. It's a state that doesn't show up all that often in fiction, surprisingly.

Yvonne: I absolutely agree with you there. Plus, some subjects like history can often be more interesting fiction books than in no-fiction as a clever author can weave facts, ways of life, into the narrative without the reader realising she is learning something.

I liked the book but freely admit it's not for all. Cosy crime readers might not like it but I know you read a very wide variety of fiction so you would, I think, be fine with it.

Susan: Kay does indeed have a wide reach. :-)

I just checked my 'Arizona' page for my personal USA states challenge and I have 3 books read: Desert Noir, Dog on It by Spencer Quinn, and These is my Words by Nancy Turner. I expect you know of and have maybe read all of those.