Rather busy at the moment, what with harvesting fruit and veg from the garden every day, and tomorrow our grand-daughter arrives for a five day visit. I'm reading but not having much time to write about what I'm reading so blogging has to take a back seat for the duration. But it's a warm afternoon so rather than burn up in the garden I thought I'd nip in here and post a few more photos of our recent trip to Cardiff, in Wales. This is Caerphilly castle, built in the 1270s, and situated about 15 miles north of Cardiff. 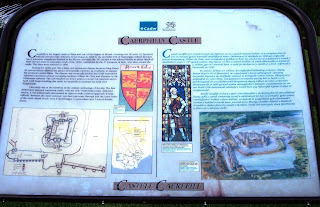 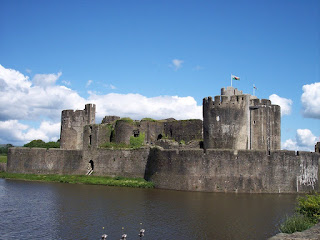 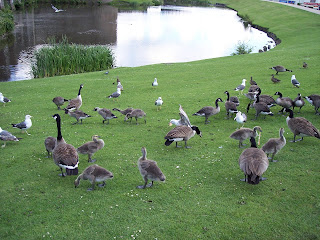 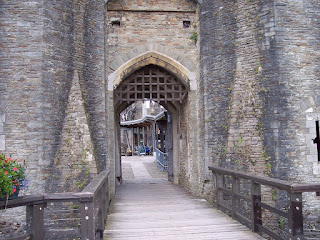 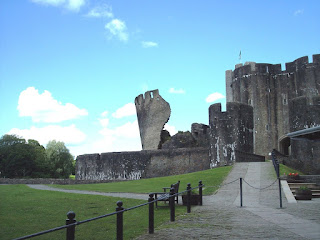 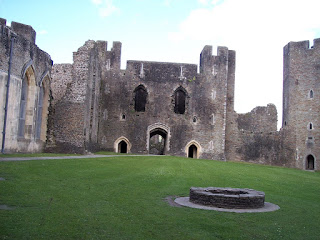 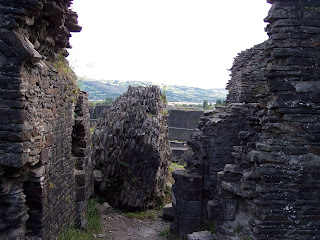 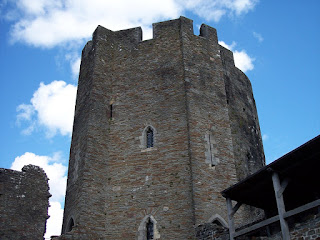 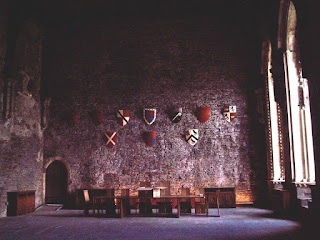 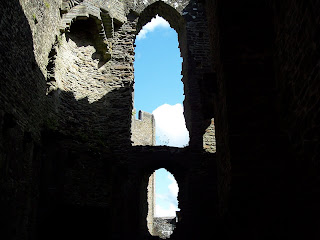 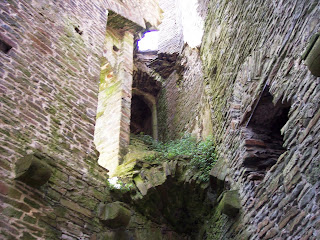 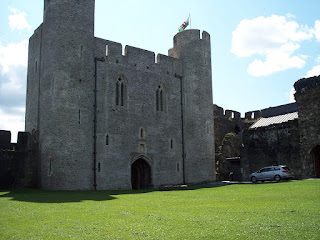 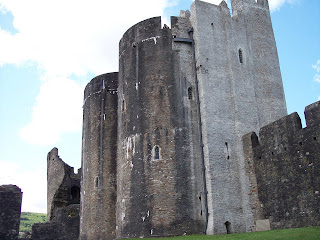 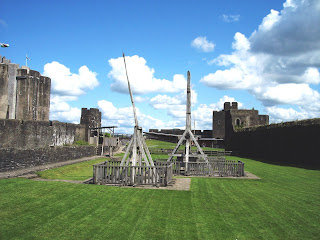 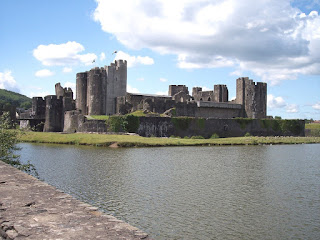 I feel as though I've been on a bit of an unofficial blogging break this past few weeks, and I suppose it's true. Partly it's because of some real life issues going on, but also I seem to have wanted to read without the added responsibility of blogging. I should also say that what I've been reading have been continuations of various series and I tend to think it's a bit unnecessary to blog about every book in a series. 'Spoilers' tend to be an issue for a start.

Anyway, to end my blogging silence I thought I would review Dark Fire by C.J. Sansom. It *is* part of a series (book 2) but I also feel that it's a book which easily stands alone. It's also far too good not to be blogged about!

It's the summer of 1540 and it's one of the hottest on record. Matthew Shardlake is a lawyer, and a hunchback in a time when disfigurments are looked upon as something evil, God's retribution, or something similar.

After the events of Dissolution Matthew is living quietly, keeping his head down and avoiding, if possible, Thomas Cromwell, Henry VIII's first minister, a reformer, and heavily involved in the previous story.

Matthew is approached by Joseph Wentworth to help him with a case. His neice, Elizabeth, stands accused of murdering her young cousin, Ralph, by pushing him down a well. Joseph is convinced that Elizabeth is innocent but she won't plead and could thus find herself being 'pressed' to death. In fact she won't talk at all and no one knows why. Matthew suspects some trauma within the family and is about to start investigating when he's summoned by Cromwell.

Cromwell is falling out of favour with King Henry. Henry wants to divorce Anne of Cleeves and marry Catherine Howard which would bring the Howard family to the fore, specifically The Earl of Norfolk who, people suspect, would return the country to the papists. Cromwell has heard tell of a weapon, known as Greek or 'Dark' Fire, which might, if he could find it, put him back in favour with Henry. The weapon shoots fire over a wide range and is deadly but the formula for making it has been lost. Or has it? Cromwell has been approached by two brothers who say they have some and can also make more. The First Minister instructs the extremely reluctant Shardlake to find this Greek Fire and gives him one of his assistants, Jack Barak, to help.

The two men have exactly two weeks, not only to find this weapon but also to investigate the problem of Elizabeth Wentworth. Both cases turn out to be incredibly complex and very dangerous to boot. Shardlake's inquiries into Greek Fire make him the target of two assassins who seem always to be one step ahead and are killing anyone who might be able help. Not only that, can he really trust Barak? The man is a rough diamond and ruthless as they come and Matthew has no idea whether the man is strictly on his side. But time is against him and the formula must be found or the consequences will be dire, not just for Matthew but possibly for the whole country.

This is one of those books that I didn't want to end. That's a rare thing for me to say because usually I'm quite content when a story reaches its conclusion. Dark Fire however has so much going for it, is so rich in detail and so satisfyingly complex in its plotting that I was really sad when I reached the end.

Matthew Shardlake is a brilliant main character. Being disabled he is the butt of much spite and vindictiveness but he carries on regardless. He's vastly intelligent and intuitive and most of all 'honest' in a time when that was very rare. In Tudor times the rich were rich and planned to stay that way and the poor... well they had to fend for themselves and very few of the wealthy bothered to help them. Historical detail is the backbone of this series... it's almost as if they are historicals first and crime stories second. The reader is transported back to a 16th. century which is corrupt, foul smelling, unhealthy and most of all, dangerous. It took very little to end up in Newgate prison where your fate depended on how much money your relatives were prepared to shell out to bribe the gaolers.

Dark Fire is book two in C.J. Sansom's Matthew Shardlake series. I actually think it's better than the first book, Dissolution, which at times confused me... I found it hard to tell one monk from another. This second book did not confuse me at all. The characters were clearly defined and I loved the addition of Jack Barak whom Shardlake is forced to work with despite serious misgivings. Their relationship, I felt, really added to the suspense and to the telling of what I felt was a very strong story. Truthfully, I can't praise this book highly enough. It is so *so* good - twists and turns galore, rich in historical detail, beautifully written, and good enough to keep even my husband happy. He generally avoids historical crime like the plague but makes an exception for this series. The only problem I can see is that the excellence of these books sort of ruins you for other less accomplished historical crime novels.

In my last post I promised (threatened) a few photos of my trip to Cardiff last week. As I'm not going to have any books to review for a few days (reading several at once) I thought I would put a few up today. And then I realised it was the 4th. of July. So... Happy Independence Day to all in the USA! Even if many will not be here to read the greeting...

Anyway. One of the places we revisted on our trip was The Museum of Welsh Life. 'Revisited' because last year we only saw half of it - it was huge and it was a very hot day, so we decided to return this year to see the other half... the other half being the gardens. 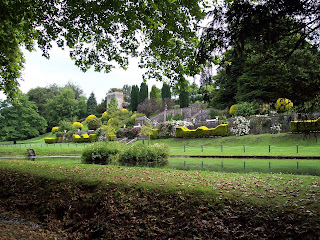 It turned out to be a very nice surprise because this is the view you get as you walk down the path. 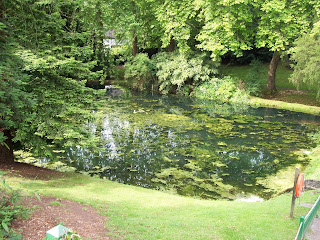 Looking down on one of the three small lakes. 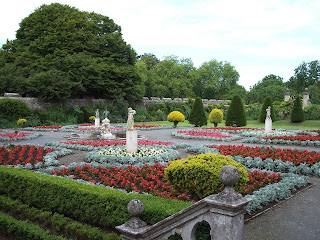 Formal gardens in the top part of the gardens. 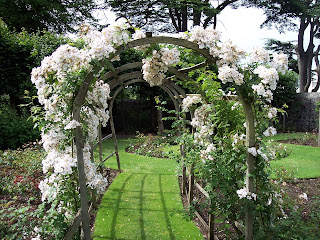 Roses! The scent was wonderful. 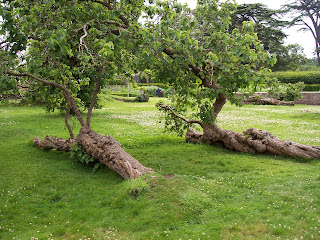 I was fascinated by these fruit trees that had fallen over and then sprouted from the trunk. Never seen that before. 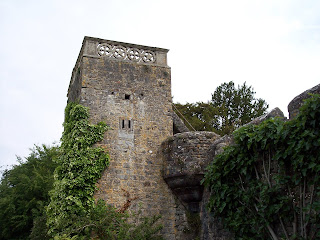 Bit of an Italian theme going on here I think. 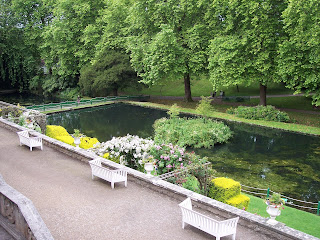 Can't you just imagine sitting in this gorgeous spot with a good book? 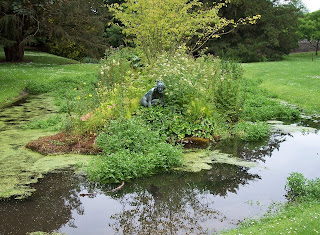 I must admit I thought this was a fairy lurking in the undergrowth. On closer inspection, I don't actually think it is... LOL! Hmm. 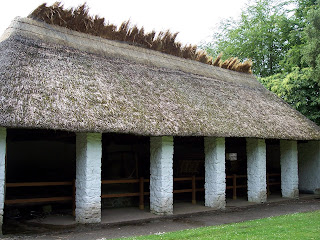 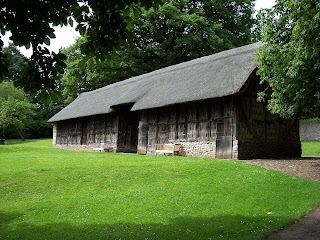 The Museum of Welsh Life is well known for its outdoor reconstructions of houses through the ages, most of which are in the other half of the grounds. Just these two in the garden half, the first barn being used as a demo of roof thatching and the second a very old barn, beautifully constructed. 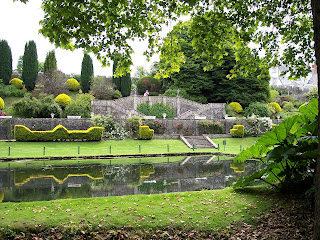 Full circle and nearly back at the beginning. We were very impressed with the beauty and tranquility of these gardens, they're well maintained with thoughtful planting and delightful aspects from many vantage points. Worth a visit if you're in the Cardiff area.
~~~oOo~~~
Posted by Cath at 11:39 9 comments: