We had a few days in Wales a month ago, staying in Llanelli which we used as a base to tour around a bit. I didn't take heaps of photos but we did spend one day in Tenby, which both my husband and myself fell for, and I did take photos there so I thought I would share them here. 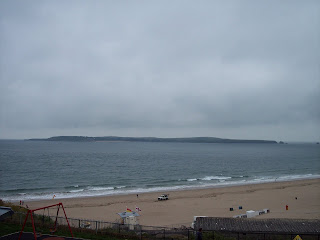 The view from the car park! This is Caldy Island. As will be seen the weather was grey and showery - I like it like that but it doesn't make for bright, summery type photos, so be warned. 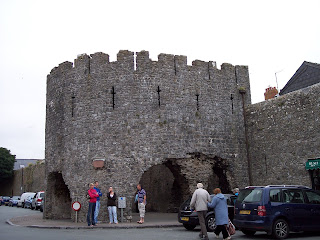 Part of the medieval stone wall that still surrounds the old part of the town. 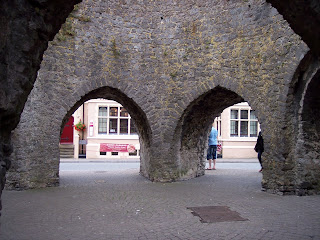 From the inside of that bit. 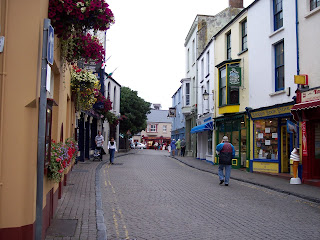 Typical of the streets in the old town, narrow, winding, pretty. 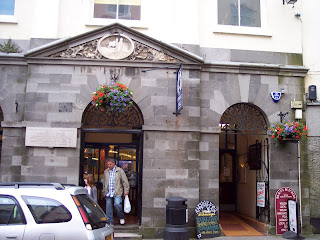 A muriel (as Mr. Titchmarsh would say) inside the market hall. Click a couple of times for better detail - it really is beautiful. 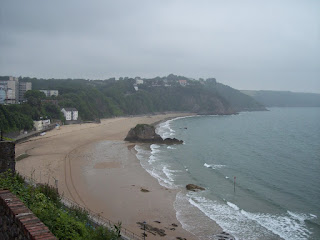 The beach on the other side of town. Tenby is built on a headland so it's surrounded by sea and beaches. 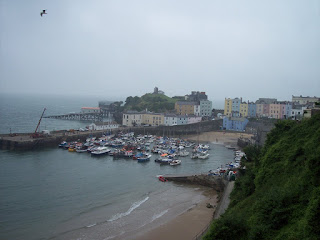 Looking the other way at the harbour. 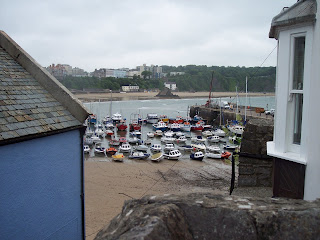 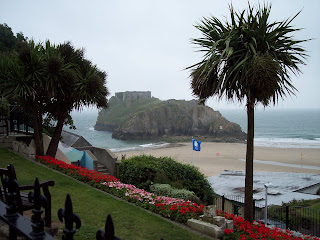 The view walking up to the museum which is right on the headland. 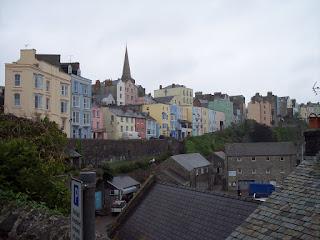 Looking up at where I took the distant harbour photo from. Tenby is such a colourful town, not sure if this is voluntary or town policy. 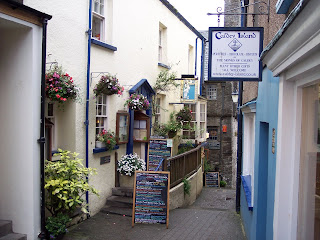 Where we had lunch. It turned out to be a bit posher and more expensive than we expected but as it was Hubby's birthday that day, it didn't matter - I treated him. 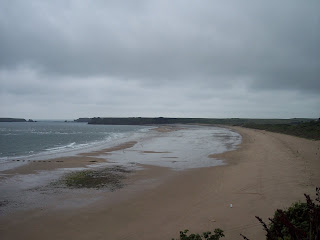 Another beachy scene back at the car park and... 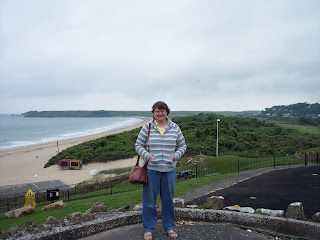 Yours truly looking a bit windswept. Not to mention... 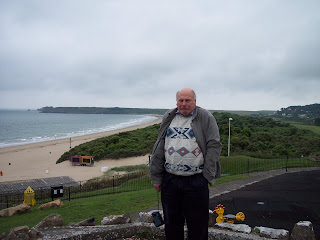 Hubby - feeling the cold on a typical British July summer day...
Posted by Cath at 11:21 13 comments:

I can't believe I haven't posted here since May. But it's true - I haven't. I took an unannounced blog break, partly due to my father dying... we were, sadly, not close, but it was still a shock... and partly because of various other things going on. I also have not been reading as much, though I am back with it now. What I thought I would do is a quick run-down of a few books I've enjoyed over the past three months and then try to get back to normal blogging. Mostly, I have to admit, I've been reading undemanding books so if serious is what you're after... stop reading now. :-) 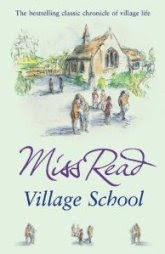 From Amazon: Fairacre is a village of cottages, a church and the school - and at the heart of the school, its head mistress, Miss Read. Through her discerning eye, we meet the villagers of Fairacre and see their trials and tribulations, from the irascible school cleaner Mrs Pringle, to the young school children, with their scraped knees, hopeful faces and inevitable mischief. Miss Read takes us through the school year, beginning with the Christmas term, when the bitterly cold weather challenges the school's ancient heating system, right through to the hot summer day when school is over for another year. Full of Miss Read's unique, acerbic wit, and wry observations, VILLAGE SCHOOL is an intriguing glimpse into a forgotten world, and has become a true classic. Very enjoyable this little book. It's actually the first of the Fairacre books, easy reading, bed-time type fare, but none the worse for that with a surprising wit and social commentary. The third or fourth book I've read by Miss Read this year, I especially enjoyed her autobiography. 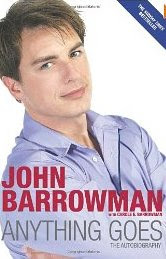 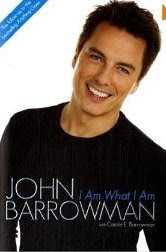 I read these two back to back. Both were actually written by Carole Barrowman who is John Barrowman's sister. He apparently dictated them into an MP3 player and she, a professor of English at a Wisconsin university, created order from chaos. The first book, Anything Goes charts the actor, stage musical performer, and TV personality's life from childhood to around the time he got the part of Captain Jack Harkness in Dr. Who. It's a warts and all story, he's very open about his sexuality (he's openly gay) and experiences, but what also comes over his huge love for his family who still live in the USA - they emigrated from Scotland when he was a child. The second book, I Am What I Am, is less of an autobiography and more of an anecdotal type book. It includes more family stories and much more about his relationship with his life partner, Scott Gill. I have to say, it is also very funny. Several of the stories, one about how he 'saved' a stray cat, put it in his bedroom for safety for the day, and the utter chaos his partner found when he got home from work, literally had me crying with laughter. Pranks the family play on each other and Scott's rampant hypochondria... he got John out of bed one night to tell him he thought he'd got Lime's disease... are also highly amusing. All in all, these two books are a joy for Barrowman fans like myself. Not sure of the appeal for anyone else but there you go: I loved them. 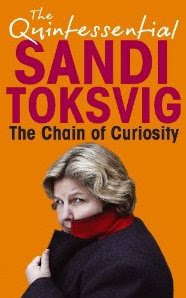 There is also a Barrowman connection with this book. I was following his tweets one night and he mentioned that his partner was reading The Chain of Curiosity by Sandi Toksvig and laughing his head off. I had to investigate of course, checked Amazon and, after reading about it, immediately reserved it at the library. Comedian, Sandi, has apparently been writing a column in The Sunday Telegraph for years, a fact I was totally unaware of. Basically, she writes of life's peculiarities and absurdities, often including facts and figures that are bizarre and ridiculous or stories that are equally crazy. It's easy to read each article in her voice and because she is naturally funny and has a very amusing turn of phrase the book is hysterically funny. If you're feeling a bit down this would be an ideal book to have close to cheer you up. Can't recommend this highly enough. 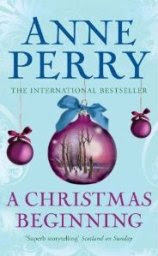 Saw this in the library and grabbed it because I rather like Anne Perry's regular little historical Christmas crime books and have already read a couple. This one involves Superintendant Runcorn, who I believe also features in Perry's 'Monk' series, spending Christmas on the Welsh island of Anglesey. He's trying to forget a certain Melisande Ewart from a previous investigation, whom he fell in love with, but what do you know? she's there too, engaged to another man. A friend of hers is suddenly murdered and Runcorn is asked to help investigate. All highly unlikely but great fun on a purely surface level and an easy read if you happen to be in the mood.

Am now reading On Royalty by TV journalist, Jeremy Paxman... not because I'm that rivetted by royalty, but because I like Paxman's writing and intelligence. His The English was excellent. This book is a lot more taxing than anything I've read in a while but I'm thoroughly enjoying Paxman's style and sense of humour. About halfway through, so more about that later.
Posted by Cath at 09:52 12 comments: