The Man in the Queue

Well, I'm back with my crime fic once again. I never can keep away for very long. Weird to think that up until the last four or five years I read hardly any crime fiction at all and now they're part of my staple reading diet. Today's offering is The Man in the Queue by Josephine Tey. 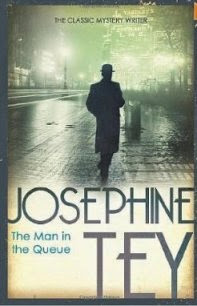 It's the last night a popular stage musical and a huge queue is waiting outside the theatre, hoping to pick up last minute seats. It's a long wait and people read or chat to each other in the queue. (No mobile phones in the 1920s!) At last the doors open and the people at the head of the queue move forward, apart from one man. The queue is so tight that he is held upright and no one has noticed that he is dead, knifed in the back.

Inspector Alan Grant is tasked with the job of solving the murder but first of all it's necessary to find out who the dead man is. No one comes forward to report a missing person and this proves to be a long laborious process. Eventually Grant discovers the man's identity and all the evidence points to his room-mate as the killer, although there are plenty of others whose actions are suspicious enough to arouse the policeman's curiosity.

Naturally, said room-mate goes on the run and Grant tracks him all over London and even to the west coast of Scotland. But the inspector is not a happy man. It's all too convenient and obvious somehow. Has he really caught his murderer?

I gather Josephine Tey was a very popular crime author in her day but now of course her books come under the heading of 'Vintage' Crime. I'd heard of this series but not read any of them until my eldest daughter gave me a set of books that she'd had given to her. So I now own all six of the Alan Grant books (plus two standalones) and that's really rather nifty as I liked this book an awful lot!

Alan Grant is an intelligent, thinking policeman, thankfully not an alcoholic, divorcee for once, but a chap of independent means who loves his job and goes quietly about it without any fuss. It makes a nice change! He is written very well as are the other characters in the book, particularly I thought, the women. The actress, the landlady, a particluar woman in the queue, the girl in Scotland, all very well drawn.

My favourite section was in Scotland in fact. The action moved to the west coast of that beautiful country and, for me anyway, it very much took on the flavour of a John Buchan novel. I was forcefully reminded of Huntingtower, which I read last month, not only in the excitement of the rum goings on and the chase, but also in the rather beautiful descriptions of the countryside, the isolated villages and the wild coastline. To be honest I could cheerfully read whole books along this line so perhaps it's time I got back to John Buchan.

So, this was a very satisfying read. I found it intelligent and tricky in respect of the whodunnit aspect because I never did guess who it was and I suspect most people wouldn't either. Oddly, I might have to cite that ending as a weakness in the book instead of a strength, although obviously I can't say why. Overall, I liked the book a lot and look forward to more outings with Inspector Grant.

This book qualifies for two of the challenges that I'm doing this year. Firstly, Bev's Vintage Mystery Bingo 2014 under the category of 'a book with a professional detective'. And secondly, Peggy's Read Scotland 2014 and is my sixth book for that challenge.

I'm reading this now--really must get on with it and finish as I am almost halfway through and it is not an especially long book. For some reason I am put off by her constant use of Dago in reference to the killer. Normally things like this don't bother me, but I do like Inspector Grant in any case. I will read more (if I ever finish this one!). :)

How wonderful to have the whole set! I've read a couple of her books and have a couple more on the shelf including this one. I enjoyed them too!

I keep forgetting that I can read Tey for Scotland. I have read all of her books twice, and I would be happy to read them again. This one would be perfect. It has been a while, but as I remember them, even within the Inspector Grant series, they have a lot of variety. Great review.

*sigh* an excellent review and onto my to-get list goes another mystery from a review by you! LOL!!!! I don't think i read any of her Inspector Grant mysteries, and now I want to. :-) Lovely review, Cath. You are reminding us how many good vintage crime books there are.

I also like how you say you can't stay long away from it! I was rearranging my pile(s) of mysteries that I took a photo of yesterday, into the top ones I want to read asap. Then between you and Kerrie at Mysteries in Paradise I added another 3 authors and books to look for/series to start! LOL

Danielle: You're quite right about the use of the word 'Dago' and it grated on me too. I've been reading quite a lot from the 20s and 30s recently and the word is literally all over most of them (Have his Carcase by Dorothy L. Sayers for instance, Huntingtower by John Buchan). I almost expect the word now but you are right, it is overused in this book. It's a small example in how far we've come in the intervening years, as you never hear it nowadays and thank goodness for that.

Peggy: I'm really thrilled to have them all and not to have to go searching.

Tracy: Yes, I'd forgotten she was Scottish too. I'm so pleased that they have a lot of variety in them, it appeared so looking at the books, but it's nice to have it confirmed.

Susan: Sorry about that! (Not really...) Yes, gosh, *so* many brilliant vintage crime books, I've been surprised at how many authors when I thought there were only a few.

I really can't keep away from crime stories these days. I read a few back in the day - Cadfael for instance - but those were the exception rather than the rule. Now I think I probably read more crime than anything else.

I saw your post but because I was rather busy yesterday I was saving it until today when I have a bit more time to properly look at the photos and comment. Like a little treat... :-)

Woo hoo..I have All these (and some of her plays too I believe and a couple of her other novels) so you aren't encouraging me to add to my must read pile... they're old favourites bliss..

Val: I understand completely why these are old favourites. I'm really looking forward to reading the rest of the books.

Yet another reminder of just how remiss I am at reading some of the classic authors and books of our time, as I have to admit that I have never come across this particular authors name before!

I wonder if your set have the original 'vintage' cover art, or the new and updated 'vintage' cover versions, which I have to say on the whole look fantastic? There seem to have been a whole array of alternative cover art designed for this series of books over the years, although I suppose that in line with my own beliefs about plagiarising or changing the classic books, they should best be read with their original covers, to maintain the period and integrity of the story.

Thanks for an excellent feature and a very thorough and even handed review. I hope that you are well and that you have a good weekend, despite the rather miserable weather outlook!

Yvonne: I must admit, until a couple of years ago I'd never heard of Josephine Tey either. I believe she came to my notice when someone wrote a crime novel where she was the detective... or something like that. I may be remembering wrongly but I think that was it.

As to these covers, I've had a look for the original vintage covers but can't see any illustrated anywhere. My guess is that these are the new 'updated' ones.

We're fine thanks, hope and your hubby are too. Have a nice weekend. We're off to our daughter's for the day.

Hope that you had a good day with your family, we are off to the local music centre tonight for jazz recital, so that should be good.

I was intrigued by the way you discovered Josephine Tey, so I had a little dig around. Sure enough, author Nicola Upson, has written a series of mystery novels which feature Golden Age detective writer, Josephine Tey, as her main protagonist. Actually the books do sound rather good, however I'm not sure that I would want to read them after reading soomething written by the lady herself!

There have been several re-prints of Josephine Tey books over the years, however this seems to illustrate the original Pan Books collection ...

I am looking forward to getting my hands on some of these stories,

Yvonne: I hope you enjoyed your jazz recital.

Yes, that's the author, Nicola Upson. I hoped my memory wasn't deceiving me. When the first book came out a lot of people were reading it and some felt uneasy about the fact that the main protagonist was a real person. I took it out of the library once but didn't get around to reading it.

Amazing covers. I don't think publishers would produce covers like that these days. LOL. Mine are the modern ones.

Love Josephine Tey! I envy you that you're just starting with her.

I also enjoy the Upson books with Tey as the protagonist--they have a vintage flavor, but you can definitely tell they were written by a modern author.

Bev: I love having new to me series like these Joesphine Tey books and DLS to get my teeth into as I know I have a lot of good reading ahead of me.

Yes, I've been aware of the Upson books and plan to try them at some stage... when I finish the Alan Grant books perhaps.