I'm still on a crime/mystery reading kick it seems, today it's The Outcast Dead by Elly Griffiths, book six in the author's 'Ruth Galloway' series. 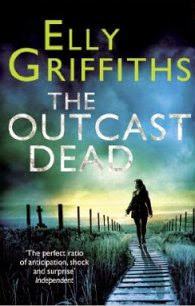 Ruth Galloway, who is head of forensic archaeology at the University of Norfolk, has excavated the body of a woman in the grounds of Norwich castle. The shocking thing is the skeleton's hand has been replaced by a hook. It seems they have found the burial place of the notorious Jemima Green, known as Mother Hook, who was hanged in Victorian times for the murder of several children in her care. She looked after the children of women who couldn't look after them themselves, children born out of wedlock and so forth. Suddenly the department has the producers of a TV series, Women Who Kill, interested and they want Ruth to be part of the filming.

Meanwhile,DCI Harry Nelson has a serious case on his hands. A young child has died, the third child in a row to die in suspicious circumstance in his family. Did the mother kill three babies or is this just a terrible, blameless tragedy?

Ruth is trying to do her usual juggling act of doing her job properly, being a mum to toddler, Kate, and being a friend and confidant to friends and colleagues. The question of Kate's parentage - Harry is her father - is a constant tight-rope act but mostly she thinks she has it sorted. Then a child goes missing and Ruth is pulled into the case because she seems to know everyone concerned. Could there possibly be a connection between this current case and the long-dead Mother Hook?

If someone asked me to choose a favourite current crime series I'd be hard put to decide on just one. John Connolly's Charlie Parker books - even though they're part horror - would be up there in the running, Carola Dunn's Daisy Dalrymple books also, and these, Elly Griffith's Ruth Galloway series. I've probably said it before but picking up each new one as it comes out is like visiting an old friend. The minute I start reading I'm back in Ruth's complicated world in Norfolk, experiencing her job frustrations, her complicated feelings for Harry Nelson, her love for Kate, the wild and beautiful place where she lives on the coast of the county. I just *love* this series. I can't really account for it because I know some don't care for them, but for me they're utterly brilliant. It's a good job we don't all like the same thing, that's all I can say.

I think it must a combination of things which attracts me. The first person narrative is perfect for displaying Ruth's character in all its contrariness. I suppose the things that irritate her would irritate me too and perhaps I identify with her very strongly. But it's not just Ruth, the multiple first-person points of view allow you to hear the thoughts of most of the main characters and it makes for quite a personal reading experience.

There's also a very gentle vein of humour that runs through every one of these books:

'What's going on with you and the American guy? The one that looks like George Clooney?'

'He looks more like George Clooney than anyone else in Norfolk.'

Ruth has to acknowledge the truth of this.'

And Elly Griffiths has rather a magical way of putting things:

'Judy wishes that she could drive on forever, that her husband and son would remain in an enchanted sleep, that she could keep going until the landscape grew wilder and the Pendle hills surrounded them and she was outside Cathbad's cottage, the sinister witch's dwelling that she has never seen.'

The author is so inside her character's heads it's almost scary. Every thought they have, usually funny or a bit mean... just like all of us... is there on the page and I love it. The books just keep on getting better and better and I hate finishing each new one and long for the next one to come out asap. I don't own them but have decided to buy them gradually for my Kindle and reread the whole lot in one big gulp at some stage. I may never fully recover.

lol goodness Cath, all of them on the kindle? May the kindle never break or get lost! lol.. The way you described this series it really sounds good! I have felt that way on a few books that were only trilogies. I seriously need the cataracts fixed, at least I hope that's what's making it so hard for me to read and even tv is hazing over.. but I did finish one book and have begun another no matter how small or how slow.

email me and tell me what you got on amazon! lol

I like Elly Griffiths' books - yet to read this one though. But I don't think I want to re-read any of them. I've got two on Kindle, bought a couple and borrowed one from the library. It's the first person narrative that for me makes these books less than perfect but she wins me over every time and after the initial irritation about it I enjoy her books.

I really couldn't decide on my favourite crime series right now - there are so many good ones!

Pat: Amazon store all the books on your Kindle on their site, in a sort of library, so if your Kindle breaks and you buy a new one you can reload them all. Of course... that would probably take ages so I'm kind of hoping my Kindle doesn't break. LOL! Though it is one of the older ones so I need to be aware that it might.

I haven't bought anything on Amazon yet... thinking about what to buy still. I have lots of ideas. LOL

Margaret: Yes, the first person, present tense narrative is sort of odd but for some reason I'm not bothered by it.

I have favourite current series and also favourite vintage authors like Dorothy L. Sayers. I'm also about to read some Agatha Christie, which I have not done for a while now.