A real mixed offering today. I haven't posted in a little while and am three or four books behind, so this is a catch-up post of three very varied books that I've read over the last ten days or so.

First up a non-ficton, Elizabeth and her German Garden by Elizabeth von Arnim. This is my book 29 for Bev's Mount TBR challenge. 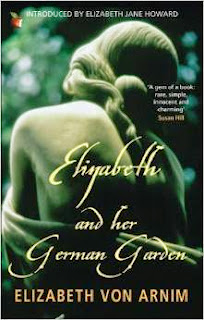 May Beauchamp met and married her husband, the German, Graf Henning August von Arnin-Schlagenthin, at the end of the 1880s. She became Elizabeth von Arnim, the author of various books, including this, Elizabeth and her German Garden. The garden concerned was at Nassenhide, owned by her husband, about ninety miles north of Berlin and not far from the German coast on the Baltic. Elizabeth's husband took her there in 1896: she immediately fell in love with the huge schloss and its garden and decided the family should live there. The book describes how she transformed the garden from a wilderness to her idea of a perfect garden. It's also about the family and various people who visit them and these were the bits I enjoyed the most. Her husband is referred to as The Man of Wrath, the children by the months of their birth - the April baby and so on. She has the eternal problem of people who come to stay and then don't leave. A real problem for Elizabeth as she's a woman who enjoys her solitude, something I can indentify with. This is a charming book but I think I expected to like it more than I did. I never really felt completely involved even though I quite enjoyed parts of the book such as the expedition to the coast in the middle of winter. The writing was excellent however and I may try one or two of the author's fictional books at some stage, possibly, Enchanted April.

Next, Watson's Choice by Gladys Mitchell. This is my book 17 for Bev's Vintage Mystery Bingo challenge and covers the category, 'A book with a man in the title'. 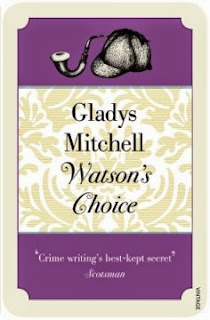 Mrs. Bradley and her secretary, Laura Menzies, have been invited to a Sherlock Holmes weekend at the home of one of Mrs. Bradley's old friends, Sir Bohun Chantrey. Sir Bohun is a huge Holmes fan and is putting on competitions for his guests and wants them to attend dressed as characters from the stories. Sir Bohun has been telling Mrs. Bradley for a while that he fears for his life and she wonders, with the odd mix of people attending, whether things might come to a head this weekend. They do in fact, but not in quite the manner anyone expects.

This is my first 'Mrs. Bradley' book by Gladys Mitchell. I vaguely remember the TV series at the end of the 90s, which starred Diana Rigg, but don't think I watched it at the time. Perhaps that was a shame as I quite enjoyed this romp through 1950s country life. This is, I think, book 28 in a series that's about 50 books long. I generally start at the beginning of any 'new to me' series but the library is rarely that obliging with these long vintage crime series, so I just tend to grab what it has, and I don't think it made much difference in this case. Anyway, there was nice humour in this story, an excellent Sherlock Holmes tie-in with the appearance of a big black hound to play The Hound of the Baskervilles, and I liked the character of Mrs. Bradley along with her secretary Laura and Laura's fiancé, DCI Gavin. The dialogue between them was sparring and witty and great fun. I'll be reading more in this series and actually have another on the library pile, The Twenty-Third Man, set in The Canaries, involving mummies and corpses and so on. Sounds like it might do for the upcoming R.I.P. challenge! 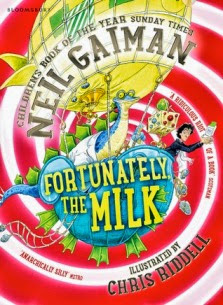 Mum is away at a conference and Dad is left in charge of the children. But he's a bit of a distracted dad and forgets to get milk in for breakfast. There's nothing for it but to go and get some and the children, a brother and sister, wait at home. And wait. And wait. He's ages and when he returns and they want to know where he's been he tells them a story. The story involves him being captured by green, globby aliens who want to take over the Earth and redecorate it. He falls from the flying-saucer and is captured by pirates from whom he's rescued by Professor Steg, a time-travelling stegosaurus, in a Floaty-Ball-Person-Carrier (hot-air balloon). Thus begin many more adventures which become more bizarre by the moment. Will the children ever get their breakfast?

A friend recommended this and I wondered if it would make a good book to read with my seven year old grandson on the days that he's with us during the school summer holidays. And so it turned out to be. A crazy adventure, coupled with stunning illustrations by Chris Riddell, made for a perfect book that my grandson and I could take turns in reading. The reading level suited him perfectly and we giggled our way through the story, sometimes laughing so much we couldn't stop. The book is pitched at younger children - perhaps 7 to 10 - but has another layer that can be enjoyed by adults as well. Grandson and I both loved this book and he awarded it the ultimate accolade when he said as we finished it, 'Can we read it again soon, Grandma?' Can't say fairer than that.

Cath, I have to get Unfortunately the Milk! Have Elizabeth's Garden, may start with one of her fiction books I have also though. Good books, all three!

Peggy: I would think your grandkids would love Fortunately, the Milk. Yes, they were three good books.

I thought Elizabeth and her German Garden sounded good and a book I'd like - and when I checked I found I had a copy on my Kindle and had completely forgotten I'd downloaded it. It's as though the books go into a black hole when I put them on Kindle!!! They just vanish from view, not like the physical books on the shelves. Anyway thanks for your review - it's nudging me to read the book!

I really would like to try one of Gladys Mitchell's books, I think the library may have one or two.

Fortunately, the Milk, sounds great - I'll have to see if my granddaughter (9 in December) has read it. I think I'd like it too.

Some Elizabeth Von Arnim books are available at Project Gutenberg... I went through a phase of collecting and reading them long ago ..I think Enchanted April is my favourite.. they are not bold books and I think you have to be in the right mood to read them (if that doesn't sound silly) I have a feeling that "Elizabeth in Rugen" contains a passage that makes me laugh ..and I can't remember it well enough to quote ..so now I sound totally scatty and I'll have to go check ..... ho hum
Oh and btw Unfortunately the Milk! is waiting for me at the library.....and it's all your fault .... lol

Oh and Archive .org has at one too..
https://archive.org/details/caravaners00arnigoog

Margaret: I know exactly what you mean about downloading books to Kindle and it being as though they disappear into a black hole. I have so many on there that I really want to read but you can't see them so they get forgotten.

Fortunately, the Milk is a perfect book to read with grandchildren.

Val: I'll have to check PG for EvA books, thanks for the tip. No that doesn't sound silly at all. And thanks for Archine.org link.