Books with lots of charm

Some books are just simply charming. With these books it matters not that they're not heavy on plot or full of angsty happenings or people doing horrible things to each other. And more and more... certainly over the last few weeks anyway... I seem to be reading quite a lot of this type of book. Books that you know won't upset you but will just make you feel good the minute you open them and start reading. Authors that spring to mind who write, or wrote, this kind of book: Angela Thirkell, D.E. Stevenson, Alexander McCall Smith, Alan Bradley, Carola Dunn. But there are 'loads' more and everyone has their own favourite 'charming' or 'comfort' authors I'm sure. 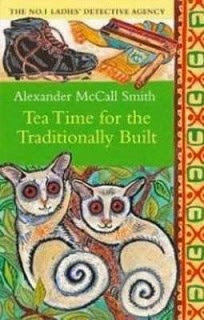 Mma Ramotswe is approached by the owner of a local football club to find out why the team hasn't won a match in ages. Mma Ramotswe is reluctant to take the case as neither her nor her assistant, Mma Makutsi, have any knowledge of the sport and nor do they wish to acquire any. The owner suspects match fixing and feels they are the ones to investigate. Mma Matkutsi has problems of her own. Her fiance owns a large furniture shop and has just taken on a new assistant in the bed department. It's Violet Sephotho, an attractive woman who knew Mma Makutsi at secretarial college and who has had a couple of run-ins with her in recent times. Mma Makutsi feels Violet is up to something, but what? At the same time Mma Ramotswe's very ancient but precious van is on its last legs. Her husband, who's a car mechanic, will be bound to give it the death sentence but she is determined to hang on to her 'old friend' at all costs. How will all of these problems be solved to everyone's satisfaction?

I haven't read a No. 1 Ladies' Detective Agency book for a couple of years now. I even wondered if I would read any more to be honest. Some series just run their course with me sometimes and I lose interest in reading more. But I suddenly had an urge in the library to pick a couple up, did so, and was immediately back in the world of Mma Ramotswe in Gabarone, Botswana, when I began reading. They are my personal comfort, 'charming' reads there's no doubt about it. I love Mma Ramotswe's extended thinking on all kinds of subjects... her country, cattle, being a private detective, Mma Makutsi and her 97% at secretarial college, being tradionally built, 'men'... lots of private cogitations about men. The crime being solved takes second place to her life and her thoughts. I know some people are really not keen on these books but I absolutely love them to bits. I'm very happy that, because I haven't read any in a while, I now have four or five still left to read.

Next, Wild Strawberries by Angela Thirkell. 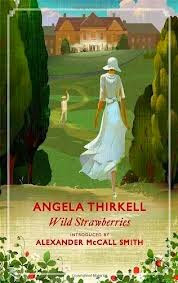 Pretty, young Mary Preston goes to spend the summer (early 1930s) with relations in the country. Lady Emily and her husband, Henry Leslie, are head of the household. Staying there as well are their daughter, Agnes, and her three young children, and occasionally visiting are their widower son, John, youngest son, David, and orphaned grandson, Martin. Martin's father was killed in WW1, his mother has moved to America with her second husband. Mary promptly falls for David, which is unfortunate as, due to an independent inheritance, he has no need to work and tends to be selfish and a bit caddish, although rather likeable with it. Mary quickly grows to love her adopted family. Lady Emily is scatter-brained and interfering, Agnes, vague but beautiful and adores her children, and John, dependable and kind. Into the mix comes a French family who have taken the vicarage for the month of August; suddenly everything becomes very much more romantic and interesting, especially with Martin's seventeenth birthday celebrations rapidly approaching.

This was simply delightful. It's very much a book about relationships and how each person occupies a niche within his or her family. The family here is very strong. It's had to be as the loss of the eldest son in the war hit them hard and continues to do so years later as Martin grows to look more and more like his father. Despite that, this is not a sad book. It's full of humour and very astute observations. Lady Emily is particularly well drawn. She would drive me mad but the family accept her as she is and are always kind. Tolerance pervades the book to be honest. People accept others as they are without judgement or nastiness. It's very refreshing and, yes, 'comforting'. I'm so pleased I have three more of these Barsetshire books to read and that there are loads more after that to collect. 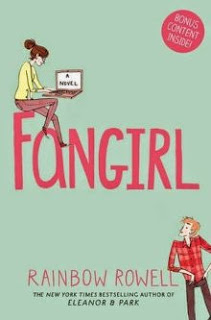 Cather and Wren are 18 year old twins who have just started college in Lincoln, Nebraska. They come from Omaha where they live with their father, their mother having walked out on the family when the girls were 8. At college, Cath had assumed she would share a room with Wren, but Wren told her no, she wanted to branch out, meet new people. If she shared with Cath they would just be twins that no one would bother to approach. Cath is very hurt... and scared. Her new room-mate, Reagan, is older than her, decidedly not friendly, and has a boyfriend, Levi, who is always around. He's very nice to Cath but he's taken... isn't he? She doesn't know anyone, has no idea how things work around the campus and her sister doesn't want her. All Cath has to fall back on is her fan-fiction. For Cath is a writer in a fandom called Simon Snow... a sort of Harry Potter fantasy series of books that have been made into films... a very popular fanfiction author in fact. She starts writing non-fanfiction with Nick, a boy she meets in her fiction writing class, and Reagan eventually and reluctantly starts to take Cath under her wing. But things get more and more difficult with assignment problems, friendship problems, family problems... 'every' sort of problem. Life at college is in fact a bit of a nightmare for the reserved and frightened Cather.

Once I started reading this I simply could not stop. Being someone who's rather close to the idea of fanfiction I could indentify with it completely. Not only that, I'm like Cath (weird that she's my namesake) in that I'm pretty sure I would find it as hard to settle and find my place at uni or college as she did. I had no problem understanding her predicament... a quiet, old fashioned girl suddenly in surroundings where everyone is a partygirl, super-confident, experienced with boys/men. She's none of these things and I really felt for her, especially when her sister basically abandons her to take up the persona of a social butterfly. She's saved by her writing. She knows that 'somewhere'... ie. on the internet... she 'belongs' and is darn good at what she does. This might sound like a sad book: it's not. It's uplifting and fun and hugely comforting to know that there are plenty of people like yourself out there... no matter how nerdy you are. As a coming of age story Fangirl is very satisfying. The author, Rainbow Rowell, clearly 'gets it' and I like that very much indeed. I liked this whole book very much indeed... one comment I read suggested the book was overlong at 460 pages. I disagree. Some books don't need to be that long but this one is just fine as it is. It's very readable, a pageturner, a perfect summer read. Set in Nebraska it told me a bit about how it is to live in that state so I've added it to my list of books read for my personal American states challenge.

hmmm well Fangirl sounds like you really enjoyed it and I sure can identify with the title ! lol I also see that Nebraska was mentioned.. how many states does that make that you have read something from??

Hey Sis! I identified with a 'lot' of the book. I think I was born a fan. LOL

Uh lessee... I've read from 18 states plus I've read 4 that are multi-state. Nearly 30 books. I've done really badly at it this year so need get back to it. Perhaps next year I'll concentrate on it a bit more than I have this.

It is a while since I have read any No 1 Ladies novels, but I should go back to them because I enjoy their gentleness.

Jo: It was a while since I's read any too but I slipped back into that world very easily.

Angela Thirkell is a recent discovery for me too and I too am delighted to have so many to read.

Angela Thirkell is a 'new-to-me' author too - I have High Rising to read.

I still haven't read any Mma Ramotswe books, although I love his Isabelle Dalhousie books, so maybe I'd like them too. I did like the TV series.

Fangirl sounds different from the kind of books I usually read, but it does sound good - and I have to admit I hadn't heard of fanfiction! Obviously I need to broaden my horizons!!

Margaret: I think you'll like High Rising. I've read 3 of AT's books now and liked them all very much.

AMcS is one of those authors where people like some of his series but not others. I like ID and Mma Ramotse but could not get on with his 44 Scotland Street books.

Fanfiction - it's said - started with Star Trek, but is now a worldwide phenomenon encompassing so many TV shows you just wouldn't believe it. The internet has had a huge impact of course, as it has with many things.

Hoping to get in an Alexander McCall Smith book this year too. Have not read any No. 1 Ladies' Detective Agency as the setting didn't attract me. Maybe some time I will get around to them. I'm looking forward to the ones set in Scotland and the Dalhousie books. Read one Angela Thirkell and didn't like it but Katrina said it wasn't one of her best so I am going to give her another go.

Not much reading going on at my house with the grans here! Only got 6 chapters read in a couple weeks! They go home on Wednesday though so back to the books!

Peggy: Perhaps you might prefer the Isabel Dalhousie books to the No. 1 Ladies' Det. Agency ones. It seems to me that people who read the author have favourite series and then ones that they don't like at all.

I hope you enjoy getting back to your books.

I want to read Fangirl so much!! It's hard to get her books from the library here, the author is so popular. I'm glad you found it as delightful as it seems. I have to try Angela Thirkell at some point. I love the No 1 ladies novels too, though I stopped reading it after Book 4 to take a break. Another series to catch up on. So happy to know they are as good as always! Lovely reviews, Cath :-)

Susan: I really loved Fangirl... much more than I expected to. I'm told that her other books are very good as well.

We have similar tastes so I think you would like Angela Thirkell too.

I kind of overdose on the No. 1 Ladies' Detective novels and have to take a break for a year or so. It's always nice to get back to them though as they're a delight.