The Tenderness of Wolves

I never seem to know what to read next. My husband just picks the next book on his library pile... I wish I could approach the choice in such a devil-may-care manner. What with library books, my own books on my tbr shelf (who am I kidding? 'shelves'), books on my Kindle, books on my Nook... and then there's fiction or non-fiction... what do I fancy starting today? It's horrendous and I agonise terribly over it, sometimes taking a couple of days to make the decision (though in those cases I generally have a long non-fiction I'm already reading so I'm not entirely without reading matter).

I have one book that's proving particularly awkward at the moment: Goblin Emperor by Katherine Addison. I've been hearing good things about this fantasy novel on Goodreads, so decided to reserve it from my library with a view to reading it for Carl's Once Upon a Time challenge, which starts around the 21st. of this month. It came quickly and I was pleased, thinking I could renew it easily before the challenge starts. Wrong. Someone else wants it and the due date is the 16th. I now can't decide whether to read it anyway and have it not count for the challenge, or hang on and see if another branch fills the reserve slot as there are three copies in Devon. And I am of course stressing over this quite ridiculously...

Anyway, fed up with myself, I did something uncharacteristic of me... I grabbed a book at random off my tbr shelf to read. And it was this:

The Tenderness of Wolves by Scottish author, Stef Penney, has been on my tbr shelf for what must easily be six or seven years. In fact I see it was mentioned in a post I did in December 2007 as a book I wanted to read in 2008. So, oh dear... at least seven years. It's a real shame I waited that long to read it... but is it? There's a theory that there's a right time to read every book you own and as I seem to be reading a lot of books featuring mountains, wilderness, winter and so on... perhaps this was indeed the perfect time for me to read this particular book? It certainly feels like it to be honest...

A bit about 'this' book. The small fictional settlement of Dove River is situated on Georgian Bay on the Canadian side of Lake Huron. In 1867 it's an isolated spot where the main law enforcement comes via The Hudson Bay Company, although by this time it is starting to lose power and influence. Fur trappers, made up of the native Indians and lone white hunters, often French, are fed up with the company's abuse of its power and are starting their own fur trading company.

The Ross family, living in Dove River, consists of the husband, Angus, 'Mrs' Ross - whose first name we never learn - and their adopted teenage son, Francis. Francis is very friendly with a French trapper, Laurent Jammet, who lives close by. He's closer to Laurent by far than to his parents, relations between the boy and his parents are, in fact, rather strained. It's Mrs. Ross who finds Jammet's dead body in his shack and also realises that her son is missing. The village immediately suspects Francis of killing the Frenchman and running off but Mrs. Ross is convinced of her son's innocence.

She sets off into the wilderness with William Parker, another trapper and stranger to her, to try to track her son down. She has a fear of 'wilderness' but faces that fear in order to save her son. This trip will be life-altering. Secrets will uncover themselves and she will discover an inner strength she never knew she had.

OK, well that description is a bit sparse, I realise that. There are quite a few characters I've not mentioned - the company man, Donald Moody and his Indian side-kick, Jacob. The Knox family, husband, Andrew, is the town magistrate who has two very different daughters. A searcher called Sturrock who has an agenda of his own in coming to the settlement. A religious settlement far into the north, peopled by Norwegians, is quite fascinating. The novel is peopled by folk who are very human. They give in to temptations, they're sometimes mean-spirited, jealous, selfish, judgemental. But they also, like all of us, still try to do the right thing. Well, some of them do.

The reason my description is sparse is because of the layers in this book... it's full of secrets, not just people's behaviour but mysteries. Two young girls disappeared in the wilderness fifteen years ago. What happened to them? What's the mysterious bone tablet that the world and his mother-in-law seem to be after, that belonged to Laurent Jammet, and where is it? To talk too much about the plot would be to give away too many spoilers and it really is better in my opinion to go into this book not knowing very much.

It can probably be deduced from all this that I absolutely loved this book. And so I did. I loved the very human characters, particularly Mrs. Ross, but also Donald Moody, William Parker, and the 'less attractive' but intelligent Knox girl, Maria. I loved the complicated plot and the mystery element very much too. But most of all the setting of the Canadian wilderness was beyond wonderful. I was totally smitten to be honest and had to go and look to see exactly where Georgian Bay is. It's here on the east side of Lake Huron: 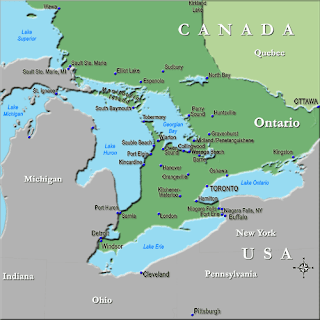 (Map from Visit Georgian Bay.) I imagine it to be stunning, various photos online certainly support that. And one tiny little coincidence, one of my favourite songs is Christian Island by Gordon Lightfoot. Where is Christian Island? In Georgian Bay of course. I also realise that twice in my life I haven't exactly been a million miles away from this area - firstly when we visited Niagara Falls in 1996 and secondly on a visit to The Bass Islands and Put in Bay on Lake Erie. I'd like to read more about Canadian history and exploration so will have to look for something. I'm sure there must be books written about The Hudson Bay Company but am wondering if there are other books out there. Any recommendations would be welcome.

The Tenderness of Wolves is my book six for Bev's Mount TBR 2015 challenge.

This one sounds like it was read at just the perfect time. And, yes, I do believe that. I've had it happen too many times. Glad you enjoyed it so much. I don't have any suggestions for further reading, but I expect you'll run across the next book meant for you soon. :-)

LOL .. had to laugh because I had a book from 2007 that I read recently too! sometimes it is pathetic how much we are alike lol lol
Glad you liked this one.. best go find Snow Falling on Cedars as I am almost done with it and it's a really good read!

I have a very hard time picking what to read next, too! It's horrible sometimes. I just Scribd so I added yet another option to choose from!

I go through pretty much the same as you trying to decide what to read next. What makes it so hard is that there are so many books I want to read NOW, but which one to choose!

I've tried grabbing a book at random - not fancied it and put it back - it doesn't always work! I'm a great believer in the right book at the right time for me.

Anyway I'm so glad you enjoyed The Tenderness of Wolves - the right time for me to read that hasn't arrived yet - and it's been sitting on the tbr shelves for years! Maybe this year will be it's time.

Kay: I think it's a common experience with readers. We beat ourselves up over the time some books spend, unread, on the shelf but to be honest... what does it matter as long as we get to them eventually.

Pat: Really? That's so funny. I'll have a look for Snow Falling on Cedars and pump it up the tbr pile.

Kelly: It is horrible, especially if you have challenges on the go and are also trying to pick something appropriate for those. I'm not sure what 'Scribd' is. LOL!

Margaret: The 'NOW' thing makes it hard too. So many appeal at the same time. Decisions, decisions...

No, it doesn't always work. In fact it's strange that it did work for me this time as random grabbing off the shelf is not really my thing.

The right time for you to read this book will come, I have no doubt of that.

Nicola: My pleasure. It's a very good book.

Wonderful writeup, Cath. I've been meaning to read this for a while, ever since I read The Invisible Ones. I loved that book, and wrote about it here, http://lettersfromahillfarm.blogspot.com/2012/04/invisible-ones-by-stef-penney.html
in case you are interested in reading something else by her.

Thanks, Nan. I saw she had another book available as well and was wondering what it was like. As you loved it I shall keep an eye out for it. (I'll go and read your review later.) The Tenderness of Wolves is so worth reading.

I have fished out Snow Falling on Cedars and it's sitting on the shelf waiting to be read over the next few weeks. You and Pat have persuaded me. Not that I ever take a heap of persuading...

I've heard such good things about this book, Cath. I might have to break down and read it! I know exactly what you mean about trying to decide what to read! I get so upset with myself for wasting reading time fussing over what to read!

Peggy: Well, one of the good things is that the book would count for your Scottish challenge as the author is a Scot. Lot of Scottish people in it too.

Exactly... 'wasting reading time fussing over what to read' descibes it perfectly. I get very annoyed with myself.

This was especially interesting because I had been looking into this book just a few days ago, and had never considered reading it before then. I am doing a Canadian Challenge and the Read Scotland challenge and it fits for both. Very glad that you have good things to say about it.

Tracy: What a coincidence! Yes, it would fit a Canadian challenge perfectly. I meant to read it for Read Scotland last year and didn't get around to it. I hope you like it.