My second book for Carl's Once Upon a Time X challenge is The Raven Boys by Maggie Stiefvater. 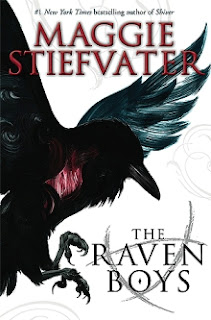 Teenager, Blue, lives in the town of Henrietta, Virginia and is the only non-psychic in a house full of female psychics, including her mother, Maura, and various eccentric aunts. But Blue does have a gift, she can somehow act as a conduit to increase the power of others: she makes things louder. But there is a problem. Her female relatives have looked into her future and ever since she can remember Blue's family have told her that if she kisses her true love, he will die.

An aunt of Blue's has come to stay, the mysterious Neeve. It's St. Mark's Eve and Neeve has taken Blue to a ruined church to see the procession of the spirits of the dead. These are people who will die in the coming year. Blue generally goes with her mother and always sees nothing, but this year is different. She sees a boy who whispers that his name is Gansey. He is wearing the uniform of the local private school for boys, Aglionby: he is a Raven Boy. When Blue asks Neeve how she was able to see this boy, Neeve tells her it means the boy is either her true love, or she is the one who kills him.

Within a few days Blue is to come across four boys from Aglionby, Adam, a poor scholarship student who would like to go out with her, wild and unpredictable Ronan, enigmatic Noah and... Gansey. She becomes involved with their search for a local leyline. Gansey believes that if he can find it it will lead to the burial place of the last Welshman to have the title of The Prince of Wales, back in the 14th. century, Owen Glendower. Blue becomes more and more embroiled in the boys' personal lives and in the search, all the while knowing that Gansey will be dead within a year...

For me this book was a bit of a slow burner. I liked Blue and her household immediately, the aunts were beguilingly potty and Blue herself is an interesting character. Her 'voice' in the book is very strong. The problem for me was that I found the four boys quite irritating for the first hundred pages. I think possibly the reader is meant to feel that way, teenage boys are, after all, teenage boys. I just thought there was just a bit too much humdrum stuff about them... I wanted the author to get to the point of the story more quickly. When that did eventually happen the book became very good, very quickly, and the boys a lot less annoying.

I liked the idea that the town of Henrietta was, supernaturally, a sort of hub. The atmosphere of the book is rather pagan and mystical, and the Welsh connection is interesting. The theory that Owen Glendower's body was shipped across the Atlantic to be buried in Virginia - I forget why - is intriguing and makes for an excellent theme to base a paranormal fantasy around. I was reminded a bit of Alan Garner and Susan Cooper's books, even though the author, Maggie Stiefvater, is American. The writing is not quite up to the standard of those authors but it's certainly engaging and very readable.

I believe there are a total of four books in this series and I definitely want to read them. Once it gets going this is a good book, older teenagers would love it I suspect, but I think anyone who enjoys a bit of paranormal fantasy would enjoy it.

another series! you just can't stay away from them lol.. glad you liked it enough to want to read more of the series!!

I like the sound of this - despite the teenage boys! The Welsh connection interests me and I do like Alan Garner and Susan Cooper's books. I'm afraid I forgot about Carl's challenge - but I suppose it's not too late ...

My copy of this should be here tomorrow!! I am looking forward to it!

Pat: Yep, I think I'm addicted to series... mind you... most books are part of one these days. lol

Margaret: I'm hoping the Welsh connection is delved into a bit more in future books. No, not too late for Carl's challenge, it doesn't finish until the 21st. June.

Kelly: I hope you enjoy it!