I had a couple of reasons for suddenly deciding to read The Whispering Land by Gerald Durrell. Chief among them is that I'm reading Douglas Botting's biography of him (pic to the left under 'currently reading') and have reached the stage in the book where he goes off and does this trip to Argentina. Because I own the book I wanted to have read it before Botting discusses and tells me all about it. Another reason is that I've been watching and enjoying ITV's drama, The Durrells, so was in the mood for a Durrell travel book. 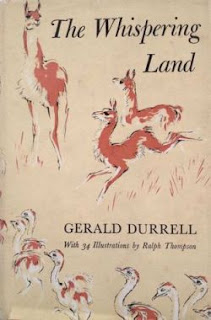 This trip to Argentina was Gerald Durrell's fourth animal collecting trip after two consectutive trips to the African country of The Cameroons and one to British Guyana in the north of South America. By this time his idea of starting his own zoo is beginning to take hold although he's still collecting animals for other zoos as well as his own. Many South American animals were, at this time in the early 1960s, rather an unknown quantity though Darwin had noted quite a few on his trip to Argentina in the 1830s. Durrell includes a quote from The Voyage of HMS Beagle at the start of every chapter so it's clear he's very much inspired by Darwin's travels.

It was Durrell's new wife, Jacquie, who apparently chose the location for this animal collecting trip and she accompanies him along with his secretary, Sophie, and various drivers and guides who change along the way as the destinations alter. All of them are real characters and only too willing to accompany Durrell on some of his mad exploits. His main aim to was to see, for the first time, the massive penguin and fur seal colonies of Argentina:

It was in this desert area, protected from the sea wind by the encircling arm of the dunes, that the penguins had created their city. As far as the eye could see on every side the ground was pock-marked with nesting burrows, some a mere half-hearted scrape in the sand, some several feet deep. These craters made the place look like a small section of the moon's surface seen through a pwerful telescope. In among these craters waddled the biggest collection of penguins I had ever seen, like a sea of pygmy headwaiters solemnly shuffling to and fro as if suffering from fallen arches due to lifetime of carrying over-loaded trays. Their numbers were prodigious, stretching to the furthermost horizon where they twinkled black and white in the heat haze. It was a breath-taking sight. 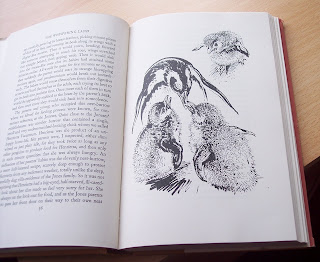 In all, Durrell visits three different parts of Argentina... the coastal regions of Patagonia, the pampas, and the tropical, forested area known as Jujuy in the north. Hard to relate all of his adventures, best to read the book yourself to experience his beautifully descriptive writing and wonderful humour. I particularly liked an amazing piece about the journey one set of penguins has from the colony to the sea. Another section where he sits up all night - or tries to - to catch vampire bats feeding on the horses is also hilarious. And he wakes up early one morning, after a night's asleep under a Landrover, to find a family of foxes playing with a roll of toilet paper. His description of this episode is pure joy. 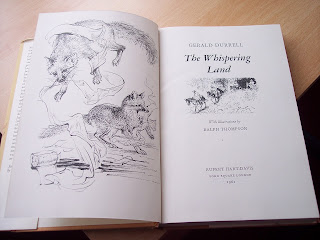 The book is illustrated all the way through by Ralph Thompson and these drawings make the book come alive. I'm no expert on wildlife so it's nice to actually see the animals Durrell was collecting. 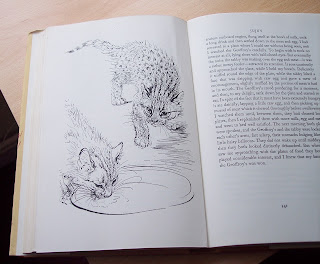 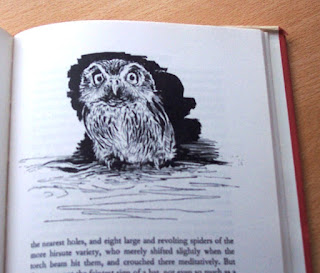 The Whispering Land was a joyous little read. It's one of the lesser known of his travel books I think... he seems to be much more famous for his African safaris to collect animals than this trip to Argentina. But the trademark humour and beautifully descriptive writing is still there and this is well worth reading. I can also highly recommend ITV's drama series, The Durrells, which I thoroughly enjoyed... beautifully acted, and such stunning scenery, and it's back for another series next year I gather.

The Whispering Land is my book 14 for Bev's Mount TBR 2016 Challenge.

This sounds like an interesting read, Cath, and the descriptions you site sound, well, they sound rather charming.

I have this one! I'm trying to collect all the Gerald Durrell I can find. The part about the fox was one of my favorites, too.
Wait- there's a tv series about the Durrells?? I must see that.

Penny: The book really is interesting, and yes, utterly charming.

Jeane: I think I might join you in trying to collect all his books. I have a handful already and have read various ones from the library, but it would be nice to own them all.

Yes, there's a new TV series based on My Family and Other Animals, made by the UK's ITV channel, entitled The Durrells. I imagine it will reach the US at some stage but if not it might be available on dvd? But so worth watching if you're a Durrell fan. I now want to read something by Lawrence Durrell after seeing the series.

Oooo, I didn't know his brother was a writer! Or if it was mentioned in the books about his family, I'd forgotten. Fiction?

I don't remember now why I was out off reading My Family and Other Animals when we read part of it at school, but I was and consequently I haven't watched the TV drama. Maybe I'm missing out and should have another go at reading Gerald Durrell's books.

I did read Justine by Lawrence Durrell years ago, which I liked - it was a long time ago and so the details have gone! We were talking about reading it at my book group, so I expect it will be like reading it for the first time :)

I was just looking up books by the Durrell brothers, Cath. I'd love to read this one. I've been watching the show too and LOVED it! Glad to hear there will be a second series. I'll be on the look out for their books while in Scotland in August!

Jeane: Yes, his older brother is the writer, Lawrence Durrell. Mainly fiction I think but some non-fiction as well.

Margaret: Obviously I can't say for certain but I would guess that you would like My Family and Other Animals very much. It's charming and atmospheric. I haven't read anything by Lawrence Durrell but plan to. He was expremely supportive of Gerald and his writing even though Gerald's books were more popular with the reading public than his.

Peggy: Wasn't the show wonderful? I liked everything about it. Try secondhand book shops in Scotland for the older Durrell books. You can often pick up a bargain. I picked this one up in a charity shop for £4.50 and when I looked found it was a first edition.