I thought I'd post a few pics of recent book purchases. I'm a terrible book buyer, seeming to be able resist anything except temptation. I do frequent charity shops, I will say that in my defense... and therein can be found some excellent bargains, cheaper even than eBay because no postage is involved of course. 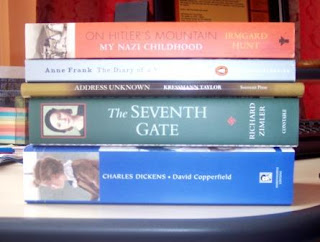 The top four books here are all to do with WW2 and my interest in The Holocaust and the beginnings of Nazism. The Anne Frank is the newer uncut version so I'll be interested to reread that to see what was left out. And David Copperfield was £1.97 in Tescos! Bargin! 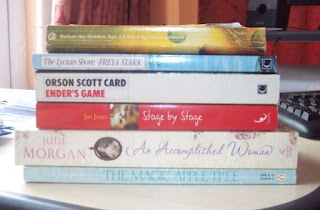 A couple of new ones here but mainly charity shop or eBay buys. I'm especially pleased with The Magic Apple Tree by Susan Hill. I read this years ago from the library. It covers a year in the author's life in rural Oxfordshire, has the most wonderful etchings as illustrations and is quite delightful. The two sci fi books are Ender's Game by Orson Scott Card because I plan to take part in the Cardathon challenge next year and Before the Golden Age 3 edited by Isaac Asimov. The latter bought because I have '2' and love it so much as it includes Tumithak of the Corridors and Tumithak in Swawm, two of my favourite sc fi short stories. So, I could hardly leave '3' on the shelf could I? The Freya Stark I bought because I know she's a classic travel writer but I've never read any of hers, so this book, The Lycian Shore will be a good starting point. 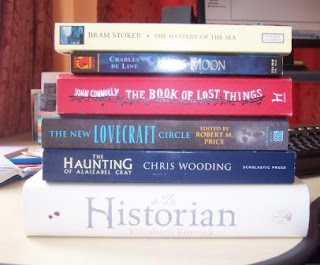 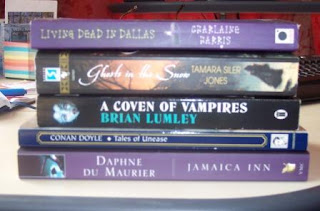 And these final two are the book pool for my RIP2 challenge... purely because I just couldn't resist taking a pic of them. I should probably get out more.
Posted by Cath at 14:11

Wow! What a great bunch of stacks :D Of course, I love Ender's Game ;) The Book of Lost Things is one of my favorite books that I've read this year. It blew me away. Quite an amazing book. I hope you enjoy it. The Historian is on my list too, and I'm glad to see some deLint in the pile! All kinds of great stuff!

Yes, I have a De Lint in the pile, so far I've only read one by him - The Little Country which I loved. I'm planning to read a lot more and actually have Dreams Underfoot on the way.

Having finished Dracula I think I will actually start my RIP challenge now and read The Book of Lost Things. Am very intrigued by it.

I love all these stacks! I'm especially interested in the Jude Morgan - I have one of hers but haven't gotten to it yet - Indiscretion I think, Have you read it? I am also going to check out The Seventh Gate.

I haven't read anything at all by Jude Morgan, Tara, and only saw this one by accident on Amazon. I read the synopsis and got very excited at discovering a new Regency author. It looks like a lot of fun and so does Indiscretion and Passion which I may get if I like An Accomplished Woman.

Oh, I just love getting new books and also seeing what other people are buying! :)

Much Ado: Yes, I think I enjoy looking at photos of other people's books almost as much as my own. It's fascinating to see what people are buying. A stack of books is like a magnet to me.

I love your book stack photos!!

Well, here I am all these years later. I wonder if I even read this post. I don't know if you've see the poster on my sidebar. I got it from Fb when I was still there. "I won't buy any more books until I've read all the ones I've got," I said. And then I laughed and laughed.

Nan: I suspect you probably didn't see this post now that I think about it. But thinking about it even harder I think it probably was me who suggested The Magic Apple Tree to you. I'm pretty sure I've mentioned it to you several times over the years.

The poster is wonderful. Have you left FB now? I haven't seen you there for several weeks but did not realise that you'd left.