The Historian and A Time of Gifts

At last, a free morning to catch up on reviews. I'm behind for a variety of reasons but hopefully when I've done these two I'll be able to keep up better. 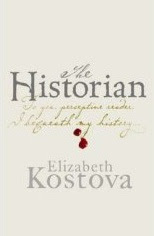 The Historian has been such a popular book for this challenge and so many people have written excellent reviews that I feel like I haven't a lot to add to what they've already said. Most people seem to have loved it and I'm no exception.

The story concerns a young woman - I'm not sure we ever learn her name - who comes across a book in her father's library. It's empty apart from an illustration of a dragon in the centre. Disturbed by the drawing the girl questions her father, who is upset to learn that she has found the book... or rather that the book has found her. Over weeks and months she gradually draws a very long story out of him, despite his obvious reluctance. The story concerns the disappeareance of the father's tutor, Rossi, when the father was a student and how he went searching for him across Europe. And thus how he met the girl's mother and how the quest tied in with the history of Count Dracula.

This is not a quick read. It's a story to be read slowly and savoured, not least because several histories run parallel to each other and you need to keep your wits about you while reading it. I think for me one of the best qualities of the book is that it doesn't treat its reader like an idiot. It's unashamedly about a book about people who love books and who are very well educated, and I like that a lot. I'm not clever enough to be part of such a world... but oh, how I would love to be! Another plus for me was all the wonderful travelling depicted. I'm such an armchair traveller and lover of travel books that all the too-ing and fro-ing around Europe was definitely part of the book's attraction, imo. And it was nicely creepy - not all the way through, but enough to make it something other than a travel and history narrative, and book about books.

One other curious fact for me is that the BBC are currently showing Michael Palin's new travel show and where should he be exploring but Eastern Europe where much of The Historian is set of course. I call that an odd coincidence. And it's making me enjoy the series even more than I would normally.

A Time of Gifts by Patrick Leigh Fermor has been sitting on my tbr mountain for a couple of years. I believe it and its sequel, Between the Woods and the Water, are classics among travel books and I can easily see why. The reason I picked this one up now was because of The Historian... I just wanted to read some more European travel stories and this one fitted the bill nicely.

The book is actually about the author's walk from Amsterdam to Constantinople in 1933. He is only 18 and not well off so he stays in cheap places or with friends he makes along the way. This first book takes him through Holland, Belgium, Germany, Austria, Czechoslovakia and into Hungary. Germany at this time was just entering its Nazi period and the author had one or two experiences of that but not as much as you would have thought. Basically, he found nearly everyone to be very kind regardless of nationality - their's and his. But Europe was changing and it was very odd reading about a way of life that would only continue for a few more years until the start of The War.

This is another book which assumes a certain amount of intelligence on behalf of its reader. The language was something else. Nearly every page had a couple of words I'd never heard of, but then I was expecting this as I'd heard about it on LibraryThing. The writing itself was beautifully descriptive especially when dealing with the winter landscapes the author travels through. 'Possibly' I would have liked more in the way of human stories instead of so many descriptions of architecture but that's a small quibble. I enjoyed the read and will certainly read its sequel very soon.
Posted by Cath at 09:53

"I think for me one of the best qualities of the book is that it doesn't treat its reader like an idiot."

Wow. That's high praise because it seems to me that far too many books these days do exactly that - treat the reader like he/she is an idiot.

I guess I'm going to have to give up and read it after all the good reviews I've been seeing lately.

oh geez, I have read all good reviews on this one I guess it will wind up on my wishlist! *sigh

I'm glad you enjoyed The Historian. I tried reading it about a year ago, was about 80 pages into it, and it just never 'grabbed' me so I stopped trying. I've never been terribly interested in vampire stories so perhaps that is why.

What a great review Cath :) I share your sentiments on the Historian. I loved the armchair traveler aspect of it too, it was one of my favorite things about the book! I would love to see Michael Palin's show...sadly I haven't seen a listing for it. Maybe it'll make it's way onto BBC America sometime soon!

cj: I agree, it makes a real change to read books where the author assumes the reader has more than two brain cells to rub together. Very refreshing. It does seem to be a book that you either like or you don't though, but worth a try, imo.

deslily: *Lots* of people seem to love the book, I agree... it was one of the reasons I felt I had to read it too.

Tara: It does seem to be a book you either love or hate and you're not the only person I know who couldn't get on with it. Everybody's tastes are different after all. :-)

Chris: I feel sure that Michael Palin's show will turn up on BBC America before too long. I think he's popular all over the world - not surprisingly as he's a really nice chap. Good series.

Loved your review. "The Historian" has been one of my favorite books this year and the traveling aspect is probably why. I'm adding "A Time of Gifts" to my list beause you make it sound like such a good read. Thanks.

Framed: I've noticed that people who don't care for travel books haven't always liked this book and I can see their reasoning. Me, I loved every aspect of it even preferring the travel and history aspect to the actual vampire tale. A Time of Gifts was very good but not a quick read. The author's style is intelligent and quite rambling, but I liked it a lot.

A Time of Gifts sounds wonderful - a bit like the Laurie Lee books (which I haven't read yet)?? I greatly prefer books written in a certain time over books written now about a time.

Nan: Yes, I agree about books written *at* a certain time... they capture the atmosphere much better than books written about a time. A Time of Gifts was very evocative of a certain age which has probably disappeared completely now.