A nice bookish day today. I went to Waterstones and was able to enjoy a half hour's browse among the new books. Not much to tempt me really, but I did buy this and also picked up my copy of this which you get free if you have a Waterstone's loyalty card, which I do. It's worth having the card just to get their free magazine, to be honest, as it really is very good, and one of the very few book magazines available in this country. Which always strikes me as a big shame.

More disappointingly I've just given up on a book. I really hate to do this but The Fade by Chris Wooding just wasn't doing it for me. It's hard to put my finger on why because I usually like this kind of sci fi novel. Partly, I think I'm not fond of the kind of female character some male authors write where she's clearly a man in women's clothes. Not much depth there at all to be honest, and the plot is dragging, 100 pages in and I'm still waiting for something to happen. It's a shame. I tend to get annoyed, not just by the wasted money, but also by the wasted reading days. I could have been reading something good!

Anyway, most of our snow is now gone although it is still perishing cold. We've been told to expect more tomorrow and Friday but, in the meantime, here're a few pics of *my* snow. I'm aware it might not look much to folk who live in proper snowy climes but we hardly get any snow in these here parts, so this was a bit special.

The first three are of our front garden. 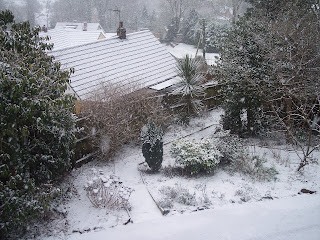 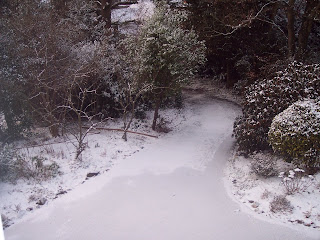 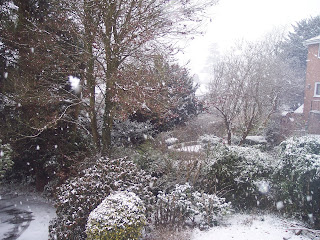 And a couple of distance views: 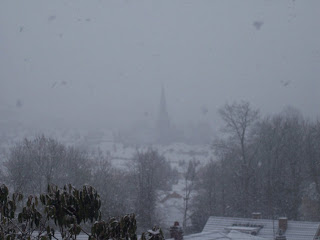 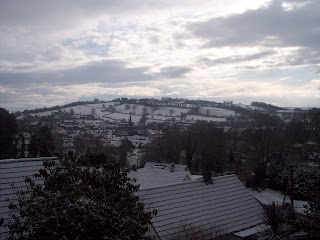 And what better time to list the snowy/winter book titles I collected a few weeks ago. Some of these are wintery throughout, some just have a chapter or two and some I haven't read, so can't say. This is they:

The Triumph of Night - Edith Wharton

I'm sure there must be a *lot* more. Looking at the list it does seem that two genres are well catered for - YA fantasy and crime. I'm sure there must be many more in other genres? And I'm racking my brains trying to think of the Georgette Heyer where the hero and heroine get stranded because of snow. Is it Sylvester? Or am I thinking of some other regency romance?

Anyway, thanks to all who contributed and anyone that can add to the list, please do. 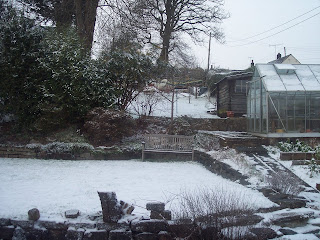 Our back garden. A trifle parky to be sitting on that seat, reading, at the moment but it's a lovely spot in the summer.
Posted by Cath at 13:20

Nice to see your photos. We've had about the same amount of snow as you and it's lingering a bit but the sun is out so I expect it'll go soon.

It is disappointing giving up on a book and reading your post has made me make up my mind about giving up on one book I'm reading - Tartan Tragedy by Antonia Fraser. Part of my reluctance to give up was the thought that I'd spent time reading it at all. Fortunately it's a library book so I don't feel I've wasted any money - maybe the library has so that me indirectly.

I swear.. if you aren't my sister maybe we are cousins?! someone in my mother's family (Clintons) makes us related! lol.. you just got Gargoyles and I checked your link.. it compares it to Life of Pi.. which I just got in the mail! (used copy) So there we go again getting similiar books!

I sure hate giving up on a book too. I'm not sure which upsets me more the money it cost me to "toss aside" or the time wasted trying like heck to read it all and getting myself upset for wasting my time when I could be enjoying something else!

Love your snow pictures! It's been very cold here too, but sadly all we get is annoying cold rain and some hail from time to time.

I didn't know about Books Quarterly, but I've been having a look at their website and it does look very good.

Hi Margaret. Our snow more or less disappeared yesterday only to return this morning, but just a dusting. And now it's raining so this won't stay around long - although my husband did say we're due more later on.

It's not easy giving up on a book. And I know what you mean about the fact that you've spent time on it already and that's wasted if you abandon it. And then I feel like a fool because what difference does it make really? It's not as though I have to go out to work or whatever!

Heheh, Pat. I think I'm really going to have to look into these UK Clintons and see where they lived. ;-) Perhaps one of my great grandpas had a bike. ;-p I have a used copy of The Life of Pi too. lol!

Nymeth: Books Quarterly is a very good book magazine. Lots of interesting articles and book reviews. I see you can now buy it online but have no idea what that would cost. If you would like a couple of back issues, let me know and I'll send them to you.

The first part of Terry Pratchett's doc on Alzheimers was on TV last night. It was very good indeed. He is an amazing person to do this to publicise this insidious disease. I hope you'll be able to see the doc somehow?

I'm the editor of Books Quarterly and just wanted to thank you for the kind comments. Also to Cath, worth mentioning that our new website (www.wbqonline.com) launched last week, and is free - as is the magazine if you're a cardholder. Do explore, as some of the archive is pretty good already - we had an interview with Terry Pratchett by Neil Gaiman, which is up there, for example.

Ed: It's my pleasure, I really do enjoy your Books Quarterly and always look forward to each new edition. The website looks excellent and I look forward to exploring it properly, later. Thanks for commenting.

Oh how I love snow pictures!

Me too, J Kaye. I absolutely love winter wonderland photos... and books about snow too. :-)

Oh, what does 'parky' mean?? The Nine Tailors is (I think) my fave DLS. Oh, but there is Murder Must Advertise. No, I think the bells are more amazing. :<)

'Parky' just means chilly or cold, Nan. We Brits are a funny lot for our slang. I checked in the dictionary and its origin is not known.

I haven't read any novels by DLS. I know, it's shameful! I do have one book of her short stories which I have read one of, and of course plan to read more.