Time, once again, for some bookporn. The majority of my book buys recently have been secondhand - either charity shop or Amazon Marketplace. These stretch back a few weeks as I've been trying not to add to my tbr mountain... not that you'd notice any particular success in that area. *coughspluttercough* 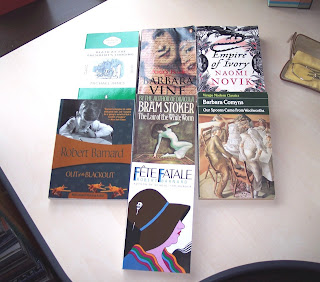 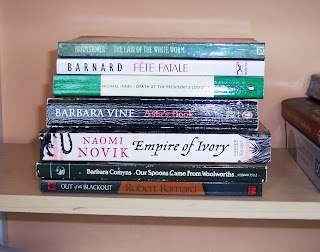 A bit of a mixed bag really.

Empire of Ivory by Naomi Novik is book four in her 'Temeraire' historical fantasy series. I haven't even started this series yet. I own book one and no others and yet I simply couldn't leave this in the charity shop. Yep... I really do realise how sad and pathetic that is...

Asta's Book by Barbara Vine is a book I've been looking for for ages and comes well recommended by readers who like her work.

The Lair of the White Worm by Bram Stoker means I plan to keep trying with him and this will do nicely for the RIP challenge in the autumn.

Our Spoons came from Woolworths by Barbara Comyns is a Virago that I think I've seen blogged about. And anyway, how could I possibly leave a book with a title like that behind?

Out of the Blackout and Fete Fatale by Robert Barnard are Nan's fault. Well the first one is... I added the latter, an English town/church fete type of crime yarn, entirely off my own bat because I thought it sounded fun. The former is a WW2 story about an evacuee who is never claimed and goes back to discover his identity when he's an adult. Sounds like my kind of story.

Death at the President's Lodging by Michael Innes is a complete unknown. I saw it in a charity shop in Exeter, read that it was a university/college type crime yarn, saw that it was almost pristine and decided that at 70p I couldn't really leave it behind.

Seven new (to me) books. And there I thought I've been pretty good this year. Kidding myself I think.

Hopefully over the weekend I can find some time to post some garden photos.
Posted by Cath at 13:33

Yeah! Asta's Book! I have the same edition. And lucky you finding the Comyns book - it's hard to find around these parts!

Naomi Novik is an author I really want to try. Enjoy your new books!

Asta's Book is one of my favorites by Barbara Vine. I should reread it! I also have the Comyns book! Enjoy your new books.

Pat: yeah the word has uh... certain connotations... and I'm not entirely comfortable with it either, but it's what blogging folk say so...

Tara: I'm really looking forward to reading Asta's book. And I had a feeling that the Comyns book was a 'lucky find' but wasn't quite sure.

Nymeth: I too really need to try Naomi Novik. I think I'm being slightly put off by the fact that it'll be 'yet another' new series started.

Danielle: I was so thrilled to see Asta's Book on the shelf in the charity shop that I actually shouted out. My daughter laughed and so did one of the assistants who was sorting books behind us. This particular charity shop, near my daughter's home, is well known for being the best book orientated one in the area. We go there a lot.

Bram Stoker is one of my favorite authors and Dracula and The Mystery of the Sea rank right up near the top of my all-time favorite novels. I really enjoyed Jewel of the Seven Stars as well. I don't want to discourage you, but as a Bram Stoker fan I would hate having anything put you off him. So....I'm not discouraging you from reading Lair of the White Worm. Definitely do. But what I remember is feeling that it was very disjointed and didn't flow well. It has been a long time though. I say read it, but please don't let it put you off Stoker if you are not impressed.

Susan: this is the trouble... so many books I want to read. It would be handy if we could read half a dozen books all at the same time! I do plan to read Naomi Novik's Temeraire series though as I know I will like them.

Carl: I loved Dracula but found The Jewel of Seven Stars hard going. It could have been my mood at the time as generally I would expect to like that kind of story. I plan to keep going with Stoker as I feel he's worth it. I have The Mystery of the Sea on my tbr pile as well so perhaps I'll read both that and The Lair for the RIP challenge.